THE INDEPENDENT VOICE OF BUSINESS IN THE SOUTH EAST

The Grotto Estate at Lower Basildon, near Streatley, overlooking the Thames has been granted planning permission to become a £32 million luxury country hotel and members’ club.

The building will be developed by SUSD who run the Devonshire hotel and private members club in the City of London.

West Berkshire Council has granted planning consent for the Grade II-listed main house, constructed as a riverside retreat for Lady Fane in the early 18th century, to be converted into a 53-bedroom hotel with a restaurant and bars.

This also includes the construction of six new two-bedroom detached lodges associated with the hotel and the replacement of several dilapidated outbuildings to create new leisure facilities.

In the grounds, the tennis courts will be refurbished, the boathouse will be reinstated, a 20th century studio building will be replaced by a two-storey spa and gym with outdoor pool and a ‘coach house’ extension will be built, linked to the original building by a glazed walkway, to accommodate 19 of the guestrooms. 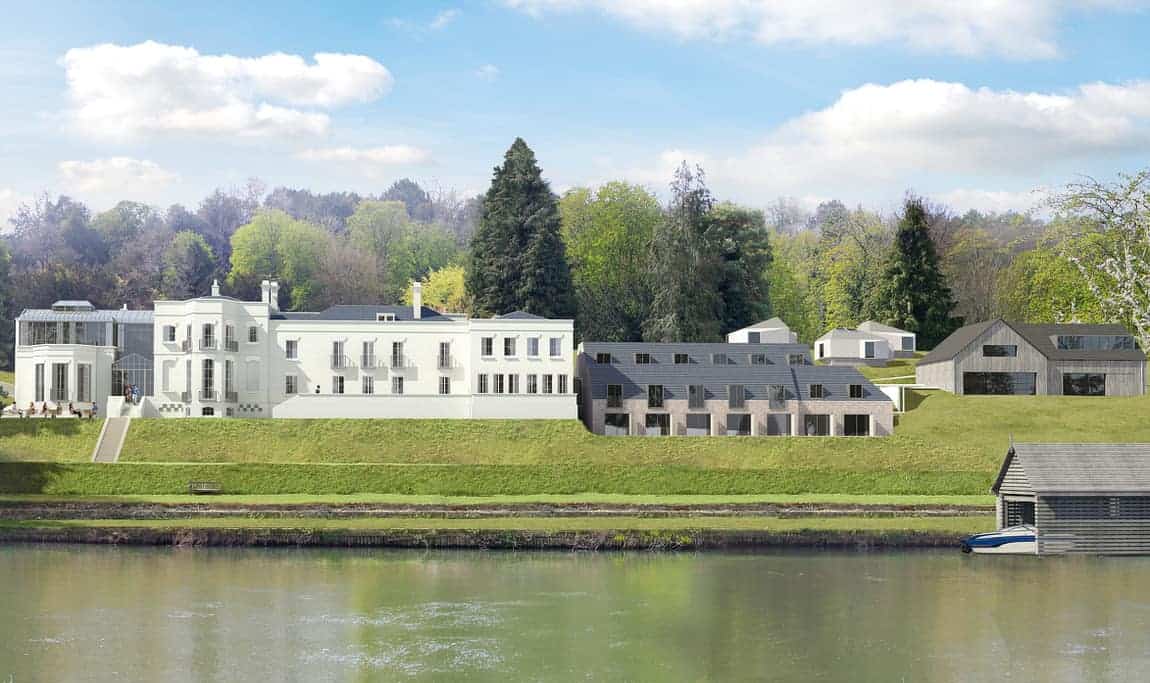 The woodland lodges will be single-storey, timber-clad modules with a mezzanine sleeping area within the roof space. The consent also includes permission for two detached family houses, which will be for private purchase in the original grounds of the Grotto.

Harry Harris, founder of SUSD, the developer overseeing the project, said: “The reinstatement of the Grotto Estate as a luxurious country retreat will demand close attention to detail, careful selection of materials and an observance of traditional detailing and construction methods.

“Just as we did with both Devonshire Club and the Curtain, we are curating spaces and services at the Grotto that will foster an experience relevant to the location and provide members with everything they need – from rooms, restaurant, bar, gym and spa, to cultural programmes, garden walks and riverside retreats.”

The building had most recently been used as offices, serving as the headquarters of the Institute of Leisure and Amenity Management (ILAM) for 50 years. James Hull purchased the estate in 2008 with the intention to return the property into a home, which proved unviable, and so the property has since sat vacant and was in a “poor state of repair”. The site is owned as a joint venture between Hull and SUSD.

Fedcap Employment’s restart programme will help jobseekers in the south