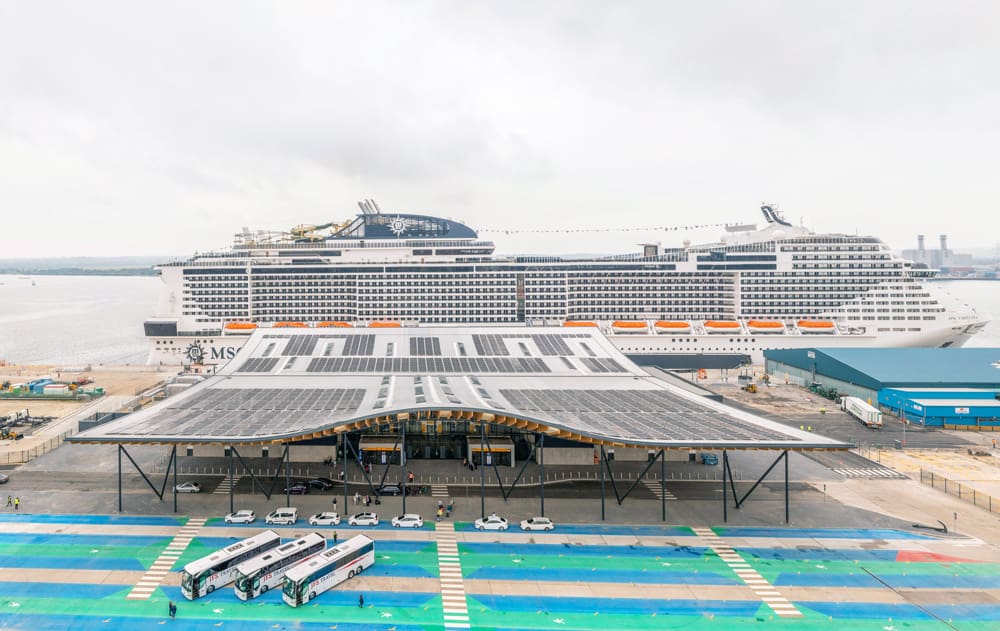 A Hampshire construction company marked a milestone when the largest development in its history – a £55 million cruise terminal – became operational.

Brymor Construction was the main contractor for the flagship building – with an iconic wave shaped roof – for Associated British Ports (ABP) at Western Docks in Southampton.

The Horizon Cruise Terminal has just welcomed its maiden cruise ship – MSC Cruises’ MSC Virtuosa – with passengers setting foot at the complex for the first time ahead of its formal opening later in the year.

Leading the way in the 'next generation' of world-class cruise terminals, the two-floor building is aimed at taking the passenger experience to another level and strengthening Southampton’s future as Europe’s leading cruise turnaround port.

The new terminal – the fifth at the port – has been designed to accommodate larger cruise ships and allow more than 6,000 passengers to disembark and embark in a single day.

It includes passenger lounges, VIP suite, £5m ship to shore air bridges and stone cladding at the entrance in a salute to Southampton’s historic city walls.

Horizon’s sustainable features include 2,000, roof mounted, solar panels and shore power connectivity allowing ships to 'plug in' while alongside once it is commissioned later this year.

Brymor Construction, with its headquarters in Denmead, began construction of the terminal on the newly cleared site in early July 2020 with the first vessel arriving just a year later.

Stephen Morton, chairman of 150-strong Brymor Construction, said: "It is tremendous to see the first cruise ship arrive at this iconic terminal.

"Our very first job at the port of Southampton for ABP was a £250,000 baggage reclaim refurbishment; it is incredible to think that many years later we have now worked on the largest project in our 34-year history here. Huge credit must go to all those involved for working so hard when already faced with tight deadlines and the challenges posed by the pandemic over the past year."

Morton, who founded Brymor Construction with wife Jan in 1987, added: "All at Brymor share a great sense of pride in this achievement and in our longstanding and valued partnership with ABP which has allowed us to together create a truly spectacular building.

"As a local firm, employer and contractor for the local supply chain, it also fulfilling to know that we have played our part in the future success of Southampton and the local economy."

Alastair Welch, director of ABP Southampton, said: "We’re incredibly proud to be building the infrastructure for the future of cruise with a commitment to sustainable operations. This next-generation-ready terminal strengthens the Port of Southampton’s position as Europe’s leading cruise turn-around port and is a huge vote of confidence in the future of cruise."

"It is a tribute to ABP and Brymor’s close relationship that we have reached this landmark moment."

The distinctive roof is formed of curved 1400mm deep glulam beams at 1500mm centres supporting a timber deck. It curves in both directions by using varying curved profiles to the beams and is generally left exposed as the visible ceiling within the terminal.

ABP joined forces with MSC Cruises and Norwegian Cruise Line Holdings for the terminal with support from the Solent LEP and the Government’s Getting Building Programme.

Brymor Construction has completed more than 10 projects at the port, including the City Cruise, Mayflower and QE2 terminals.

Brymor Construction is an independent regional construction companies with 150 employees and a £85 million turnover.

It was founded in 1987 by its chairman Stephen Morton and his wife Jan. Its headquarters is in Denmead, near Portsmouth, Hampshire, and it has a regional office in Poole, Dorset. The company’s managing director is Mark Dyer.

Brymor has the expertise, experience and capability to deliver projects in multiple sectors ranging from £2m to £30m. These sectors include education, healthcare, hotel and leisure, façade rectification, infrastructure, commercial and industrial, defence, heritage, housing and retail.