Focus on Kent: Business growth in the post-Brexit age 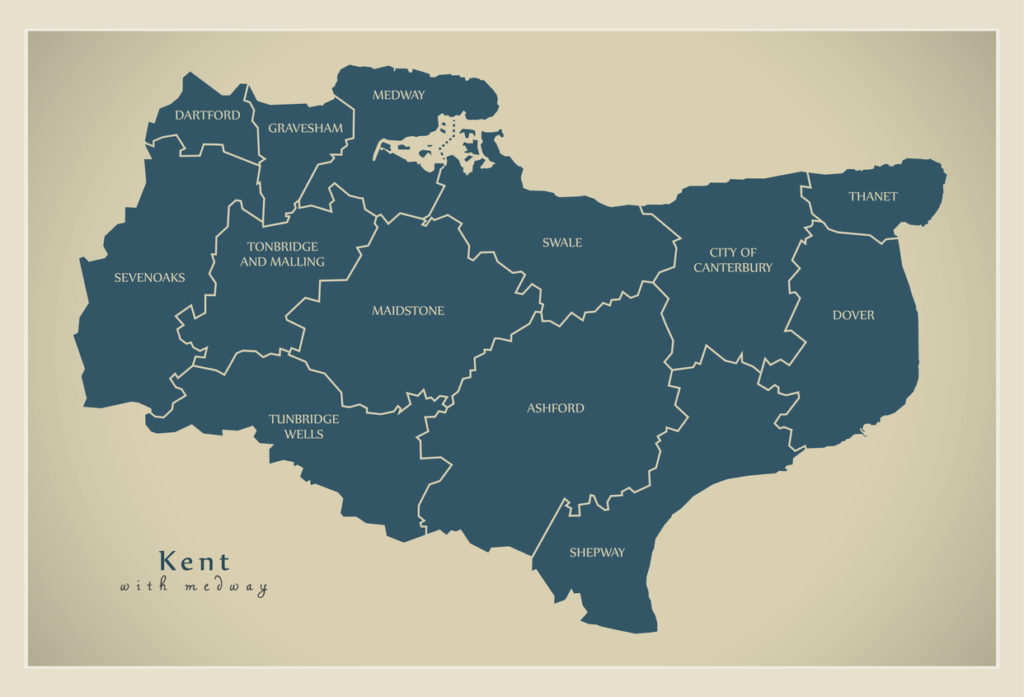 Kent is home to a diverse range of businesses, from ‘Garden of England’ food and drink producers to cutting-edge technology start-ups. We see which sectors are growing and how the county’s exporters are coping with Brexit challenges.

“Perfick!” may conjure up the bucolic Kent of The Darling Buds of May, as espoused by its main character, Pop Larkin. But you could also say the county on Brexit’s ‘front line’ is perfick for those businesses that have successfully ridden out the UK’s painful EU divorce and are now focusing on future growth.

Ironically, Bates’ tale of the Larkins is set in a nostalgic 1950s before Britain joined the EU. “Plus ça change”, as our continental neighbour 21 miles from Kent’s white cliffs might remark.

Notwithstanding the Brexit challenges that all regions face, Kent is a strong magnet for many industry sectors. As well as being a highly attractive corner of England to visit, the county is a vital transport hub, boasting Eurotunnel, five seaports and access to international airports.

Derek Murphy, Kent County Council’s Cabinet Member for Economic Development, identifies “distinctive opportunities” for growth in areas that include construction, linked with the scale of development across the South East; life sciences, notably at Discovery Park in Sandwich; manufacturing, with concentrations in Swale and the Medway Gap; food production, as well as transport and logistics.

“The Covid-19 pandemic hit some parts of the economy more than others: our hospitality and creative sectors were especially impacted by the public health restrictions,” he said. “But we have seen a return to growth this year, and the current forecasts of 6.5% GDP growth in the UK this year will have a positive impact on Kent.”

Murphy pointed to population and housing growth as important contributors to Kent’s growth. “It is vitally important that we secure the infrastructure we need to make it sustainable and to deliver benefits for Kent” he commented.

Martin Prentice, the Institute of Directors’ Ambassador for Kent, emphasised the creative and global nature of many Kent businesses. “Kent is a focal point for a number of diverse industries with a mix of global innovators and creative entrepreneurs driving change and economic prosperity across the county,” he said.

Andrew Osborne, Economic Development Manager for Ashford Borough Council, said: “Ashford has seen its fair share of technology and digital companies setting up in recent years. We have targeted growth in this sector and it is now bearing fruit with many companies using the town as their base, with its agile and a skilled local workforce.”

One business hoping to make a local impact before expanding across the UK is Localise, a community marketplace app where local people can engage with, and support, local independent businesses.

“We had a seed funding round in April 2020 and we have recently deployed our product into the App Store,” said Ashleigh Cornelius, CEO and Founder of Localise. “We’re currently working exclusively in Ashford and Tenterden as our first launch locations where we’re working in collaboration with the local councils to help promote their independent businesses.”

He added: “It is only natural that we launch the app in our home county, where we have a vested interest in the community and the success and sustainability of our local high streets. We hope to create new partnerships with more councils across Kent and then further afield across the UK.”

“Being specialised in what we do, certainly within the UK and in Europe, we have been able to attract significant business over the past few years,” said Tom Akrill, Business Development Manager at ITL, which is a member of Somerset-headquartered photonics technology company G&H Group.

“With the financial backing of G&H, we are investing in our facilities, technology and people. Our international operations will continue to be extremely important to us. G&H is an ambitious organisation and is working closely with us,” he continued.

Logistics, storage and distribution is one of the UK’s fastest-growing sectors and Kent is naturally a focus for much of this activity. Not surprisingly, Brexit and labour shortages are forcing companies to think differently about how they operate.

Europa Worldwide is doing exactly that. It handles half a million European road consignments, split evenly between imports and exports. It saw a small drop in trade as businesses migrated to Europe and the number of consignments fell.

Dionne Redpath, Chief Operating Officer at Europa Worldwide, said: “Turnover that eroded was more than replaced by additional business from imports and customs clearance income that we didn’t have before.”

Brexit triggered the launch of a new product, Europa Flow, for UK exporters. “We have created an infrastructure in the UK, France and Belgium that allows UK exporters to take away the hassles associated with the reinstatement of trade borders.

The product preserves trading conditions between UK sellers and EU buyers just like they were before Brexit,” said Redpath. “It has been a gamechanger for us.”

Europa Flow cost £5 million but the investment is paying off. “We’ve not yet recouped the investment cost, but we’re not far off,” said Redpath. “The cost of not doing these things doesn’t bear thinking about.”

Europa recruited an extra 40 staff at its hub operation in Dartford to handle the extra procedures. Group turnover of £220m in 2020 is heading towards £266m in 2021 for the company’s warehouse, air and sea operations.

Redpath added: “We expect to see greater certainty and stability with no more Brexit changes after 1 January 2022, so we can put all of our energies back into ‘business as usual’.”

Kent County Council notes that the pandemic has accelerated some economic trends that were already present and that some businesses have “pivoted” to new markets. An interesting example is Westerham-based fresh produce distribution company Produce Plus (headline picture), which suffered significant upheaval from Brexit.

“It’s really tough at the moment,” admitted Paul Knights, the owner and operator of Produce Plus. “We’ve been exporting Kentish and other British-grown produce into the EU for about six years. It’s now a lot more difficult, costly and complicated, especially having to pay VAT when goods arrive in an EU country. It makes us less attractive.”

Nevertheless, he is positive about the future. “We started preparing straight after the EU referendum result, including setting up a company in Europe to handle the administrative side. We have been proactive and learned quickly,” he said.

A priority for the company was to ensure its customers didn’t have to “take on the grief” of complicated new customs and VAT regulations. Like Europa, Produce Plus has taken on much of this burden, so customers notice relatively little difference in terms of dealing with paperwork compared with pre-Brexit times.

Covid-19 presented a different set of challenges for the business, whose main line is distributing potatoes. “We had problems when chip-making factories stopped ordering because all the fish and chip shops were closed during the lockdown. It forced us to sell potatoes at £40 per tonne rather than the usual £200 per tonne,” said Knights.

Currently, companies involved in food production and distribution are at what he describes as “the sharp end” of lorry driver shortages and rising energy costs. However, he sees a silver lining of the Brexit conundrum in the fact that it forced his company to look beyond Europe to new export markets.

Around 15% of its business is now with companies in the Middle East and Asia. Produce Plus exports Kentish strawberries and cherries as far afield as Japan and Hong Kong.

Knights’ optimism about the future is based to a large degree on Produce Plus working with like-minded smaller producers and logistics companies. Together, they are seeking out new markets as a way of combatting the dual pressures of selling into Europe and the low-cost food demands of the UK’s major supermarket chains.

In the longer term there remains a wider issue for UK exporters to consider, he believes. “The UK is very good at producing first-class produce, especially to meet the very high standards demanded by UK supermarkets. Not just fruit and vegetables, but also cheese and other dairy products, fish and seafood. But as a country, we are famously bad at exporting. Others, like the Netherlands, currently do it more cheaply.”

He is vocal about the action he feels the UK Government needs to take. “At the moment, we are taking part in conversations with the Government on the trade deal being worked out with Thailand,” he said.

Prentice emphasises Kent’s world-leading industrial production facilities and state-of-the-art office spaces, which make it a prime choice for multinationals and start-ups wanting to escape London’s high prices. But Kent is also proving adept at blending the new with the Larkinesque old. This is typified in a business currently taking shape at the Manor Farm estate in Wateringbury.

William English, CBE, a Kentish businessman and former British Army officer (a ‘tankman’ in the Lancers), returned to Kent after completing his military service career and took over his family’s Grade II-listed estate in September 2019, following the earlier death of his father.

English has ambitious plans for the former hop-growing estate in Wateringbury that his family has farmed since 1906. Industrial-scale brewing of beer in Wateringbury ran from the late 18th century (Warden’s Hill Brewery in 1778) through to the closure of the Phoenix brewery in 1982. English plans to bring brewing back to the village.

Currently studying for a post-graduate diploma and masters’ programme in brewing and distilling, he has planning permission to develop the estate with a new brewery, brasserie, along with eight hopper huts for tourist accommodation.

He describes the estate as “a very Kentish project”, commenting: “We will create a blend of old buildings and Estate history and new, in brewing and distilling technology, to deliver a sustainable future for our family, Kent and the country.”

He cites the location as ideal for creating a business in brewing/distilling and tourism, with London at the estate’s back and looking outwards to Europe and the world. “The desire to trade and welcome visitors is inherent in us; Kent is the geographic front door to Europe and the wider world,” he said, “We are located on the confluence of the ingredients for brewing and distilling, water, brewing barley and hops.”

As part of English’s sustainable business vision, the estate supports several local charities and he plans to employ locally. The estate has a developed tenancy base; brewing, distilling and associated tourism will be the second line of revenue, under an umbrella of biodiversity, programmed carbon reduction supported by continuous self-funding development and innovation.

“Once we have set up our business platform, we will have the strategic flexibility to adapt and develop further, for example, by bringing new business collaboration into the ‘ecosystem’ of the estate,” he said.

As with the support for business growth being made at a local government level, English’s approach looks to be another template for businesses to thrive and continue strengthening Kent’s SME backbone.