How action on sustainability changed fortunes of printing SME Seacourt

25 years ago, committing to a plan to take action on sustainability changed the fortunes of Oxford-based printing SME Seacourt.

Most business leaders talk about their light-bulb moment as the point when they realised they could be more efficient, and make more money. Explaining his own business epiphany, Gareth Dinnage, the managing director of net-zero business Seacourt, it was in fact exactly the opposite. 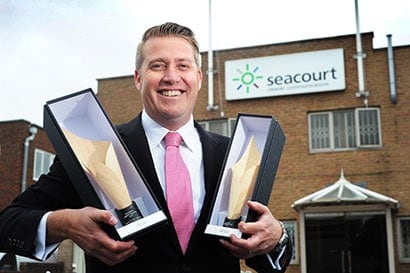 “We took to our chairman a plan that meant we had to invest more money, put our prices up, and be committed to something that wasn’t at all mainstream at that time. Thankfully, he also wasn’t happy with the idea that we would stay the same,” explained Dinnage. 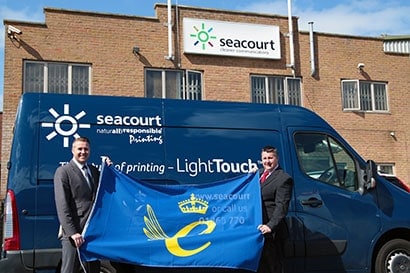 The plan for Seacourt was to take action on sustainability.

The plan for Seacourt was to take action on sustainability. At an industry conference in 1996, Seacourt leadership was staggered to learn that as well as being one of the UK’s largest industries, it was also one of the most polluting. “We were absolutely staggered as to how much we were part of a major problem,” said Dinnage. “And we all agreed that we were very uncomfortable with the idea of not acting and we had to take steps to change.”

The change pivoted around the vision that there is no future in businesses that judge success on the numbers at the bottom of a P&L. Seacourt set out to become a values-based business, with its contributions to the environment and the community around it on an equal footing to striving for profit. In the mid-nineties this was unheard of in the printing sector, and is still sadly rare. It was also revolutionary for the wider business community. Fast forward to today, and the rise in profile and popularity of certification schemes such as Certified B Corps, as well as significantly more attention and understanding around climate change, means some of the world’s biggest brands are now setting out meaningful ways to be more purpose-driven.

Caring deeply about the world has been Seacourt’s ethos for a quarter of a century. This underlying purpose has ensured that the business has innovated in areas where no one else has succeeded, thanks to sheer determination and a willingness to invest. “We set ourselves the mantra that we would only do something if it improved the environmental performance of the business,” outlined Dinnage. “This meant even if something had a huge cost benefit, if we could not make it work in a sustainable way, then we wouldn’t do it. As a result we’ve been carbon neutral for decades, we’ve sent zero waste to landfill for over a decade and we run on renewable power. But we don’t for one moment believe this is enough.”

Seacourt was one of the first printers in the UK to adopt waterless printing, saving millions of litres of water over the last two decades. Latterly it developed its own high-quality waterless LED printing process LightTouch, which uses no water and no chemicals, sealants or varnishes and produces even higher-quality printing with further improved environmental performance. It’s evolution included collaborations with ink manufacturers in the UK and machine hardware manufacturers in Japan to finesse. Today, Seacourt’s LightTouch printing process has reduced the business’ emissions by 98.5%, and won prestigious business awards.

Openly frustrated about the lack of government and policy-maker commitment to change, Dinnage is working hard to push other business leaders to take on being drivers of change. “We will not solve the climate crisis by continuing to do the same thing. We’re in the midst of a natural disaster, but it is not a problem that is beyond us if everyone focuses on it and works hard to achieve change. Carbon offsetting falls short and doesn’t take enough responsibility, there is an important need to commit to doing less harm.”

Seacourt’s light-bulb moment back in the 1990’s has built a planet-positive brand that most businesses can only dream of. A regenerative manufacturing business is hard to come by in any sector, let alone one that uses a natural resource, relies on haulage and had a poor reputation for managing the end of life cycle of its products. Dinnage summarises, “Businesses have to face the fact that they need to buck their ideas up. There are simple everyday changes to be made, and when they are all joined up, the collective results will ensure a better world for our children.” Seacourt may have been ahead of its time 25 years ago, but today the need to plan for the next 25 years has never been more urgent.