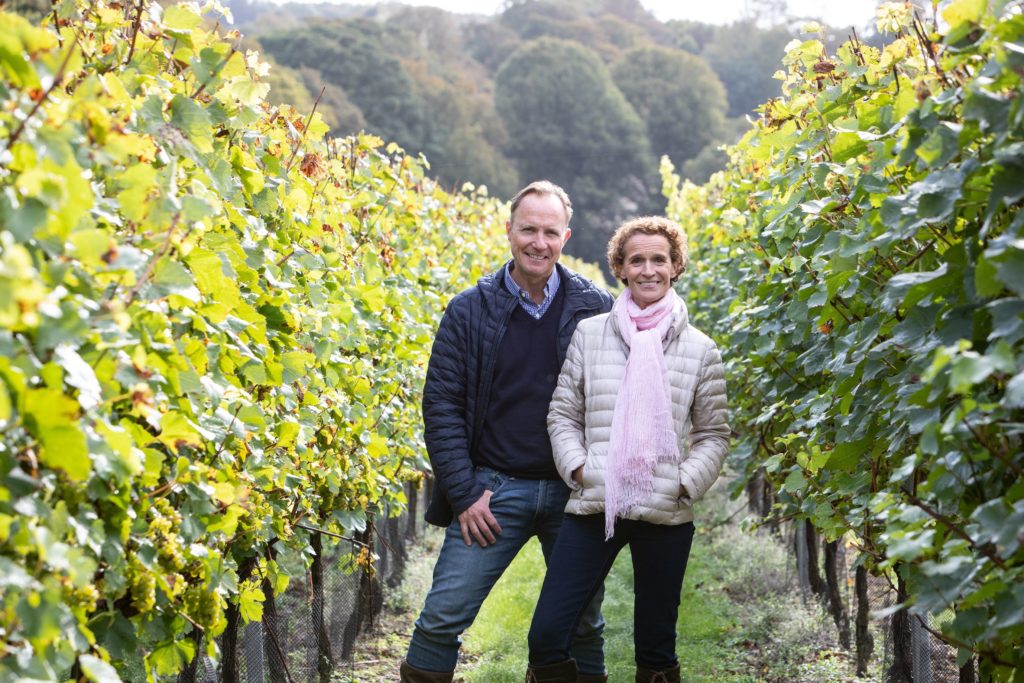 We spoke to Charles Simpson of Simpson Wine Estate about the journey of English wine, how it lost its bad reputation and is now challenging some of the world's leading wine producing regions.

World War II Royal Air Force generals who retired to the southeast of England and set up vineyards, armed with knowledge gained from their postings in Germany, are credited with a resurgence in English wine in the post war decades.

The emergent wine produced by the generals, who were essentially hobby farmers, lacked the refined taste that we have become accustomed to and its sweet taste, which originated from being produced from Germanic vines, was at odds with the dry palette of the modern consumer.

This was the second wave of British winemaking according to Charles Simpson of Simpsons Wine Estate whose Kent vineyard, along with other industry main players such as Nyetimber, Gusbourne, Harrow & Hope, Rathfinny and Hambledon, are at the vanguard of a third.

He said: "We know that the Romans brought viticulture to England in the first wave of English winemaking.

“They saw how difficult and challenging it was compared to producing wine in southern France or Spain and gave up.

"The bad reputation connected to English wine is connected to the 40s, 50s and 60s when RAF generals planted Germanic vines in vineyards in Kent. This was hobby farming that was not done in a serious fashion."

Charles said the third wave of English wine began in the 1980s when brands like Nyetimber moved away from the Germanic vines towards the French grape varieties.

This decade also saw the emergence of English sparkling from English vineyards which proved to be a game-changing moment for the industry.

Charles said: "The geology of Kent is identical to the Champagne region of France and when you plant the identical varieties that Champagne uses and with a little bit of knowledge, there is no reason why you can't produce a beverage which is as good as Champagne.

"The sparkling wines that were produced from the 80s onwards began to gain a strong reputation and would regularly come out top in blind tastings.

"That is what kick-started the journey."

Global warming has also gifted the South East of England an advantage over its neighbour in France with rising temperatures increasingly making the region an ideal place to make sparkling wine.

Charles said: "Because of global warming, the Champagne region has become too warm.

"Acidity is key when producing Champagne and as the climate warms the acidity in places like Champagne drops.”

"The sweet spot for making Champagne has drifted northwards away from Champagne and this is one of the reasons that English wines are becoming so successful and internationally recognised.”

"We are 20 years into the modern era and it is a very exciting time to be in the industry. From a trade perspective, England is the most exciting viticulture region on the planet right now."

Charles and his wife Ruth's journey into winemaking began 20 years ago when the pair decided to make a move from their respective corporate and humanitarian careers.

The pair, both based in Baku at the time due to Charles role with pharmaceutical giant GlaxoSmithKline, enrolled in remote learning courses and began plotting how their journey into the wine industry would progress.

Charles said:  "We were a young married couple away from family and friends and thinking about what we really wanted to do.

"We wanted to do something together and wine kept on gravitating to the top as it is one of those rare products where there is an agricultural dimension, there is a science dimension and there are also the business disciplines be it export, logistics and marketing.

"We were very enamoured by the modern winemaking techniques taking place in Australia and New Zealand and decided to pack in our jobs and go on a global due diligence tour of the wine producing regions of the world."

Their initial hopes of setting up a vineyard in Australia were stifled by the high land costs and the pair decamped back to Europe to consolidate their thinking.

Instead of heading back to their London flat to crystallise their plans, Charles and Ruth decided to immerse themselves in a French region that had caught their attention during their research.

"Rather than returning to London, we went to a wine producing area in France called the Languedoc.

“The appellation rules in the Languedoc had been relaxed so rather than being dictated to by the region as to what you could plant and what wines you could make it was very much down to you.“

"We saw about 40 properties before settling on a 16th century chateau called Domaine de Sainte Rose.  We have now owned this property for 20 years, it is where we started our wine journey and made all of our mistakes."

With their French vineyard established and turning a profit, Charles and his wife set their sights on expanding their investments beyond France and looked to the Kent coast for a suitable property.

Charles said: "It was 2012 and we were ten years into the French project and selling bottles to 14 markets around the world. We were in our mid 40s and thinking what we should do next.

"We didn't want to invest in any more land in France as we didn't want to become exposed in one country so we thought we would buy a bit of land that we don't have to do anything with but that could be suitable for viticulture in the future."

The result of the search was the 90-acre Simpsons Wine Estate on the outskirts of Canterbury which has gone from strength to strength since it began operations in 2012.

The couple have also just completed the purchase of a further 22 acres and plan to increase production of still and sparkling wines on the site to 250,000 bottles a year.

Their English wine has won global plaudits, with the vineyard's Roman Road English Chardonnay ranked amongst the top 50 wines in the world in the 2020 Decanter World Wine Awards.

"We started to look at land in Kent and Sussex and were very much driven by the soil types”, said Charles.

"Most of the vineyards in the UK are planted in the South East of England because it is the warmest and driest part of the country but also the geology of the soil is identical to Champagne and Burgundy which are two of the most coveted wine producing regions in the world.

"We then looked at each piece of land in terms of sunshine hours and whether it was south facing.

"These have provided us with the competitive advantages that have allowed us to produce not only world class sparkling wines but also world class still wines."

Simpsons Wine Estate markets its wine at luxury hotels and high-end restaurants however it is the speed of exports growth to Scandinavia that is particularly impressive with 40% of exports being dispatched to Norway in 2021.

"The French, Italians and Spanish will never buy English wine because they are too busy enjoying their own wine so they are really challenging markets to break into.

"The Scandis, Norway in particular, are real Anglophiles and they love Great Britain.

"While we may not be known for wine they like luxury brands such as Aston Martin, Rolls Royce, Burberry so it is not a huge jump for them to think that we can make world class wines."

English wine is undoubtedly gaining momentum with strong exports and a growing reputation, but how big could the industry potentially get?

Charles said: "The real opportunity but also the challenge is with still wines.

"Still wines are much more difficult to make because you can't get the alcohol levels that people like. People want the levels to be 12 or 13 per cent and that is a real challenge in this country unless you seriously reduce the yields in your vineyards.

"If you take the overall total category of wine - which includes sparkling, still and fortified - we import 99% of all our wine.

"In France or Spain, 99 per cent of wine is French or Spanish."

With the UK population only drinking one percent of the wine it consumes that was produced here then surely there is massive potential for growth?

Charles argues that there is but the amount of land available to fuel the increased demand is a crucial barrier to future growth.

He said: "I could never see a situation where 99 per cent of the wines drunk are English, because we love diversity and travel and eating from different cultures.

"Secondly, there is no way we have the suitable vineyard space to fill that demand therefore the growth will be limited by how much suitable land there is available.”

"There is no doubt there is genuine interest in English wine for a myriad of reasons including curiosity, sustainability and patriotism.”

"So, I do believe that demand for English wine will probably outstrip demand indefinitely which is no bad thing for trying to maintain that premium product and price point."