How Hofmeister Beer was brought back from the dead 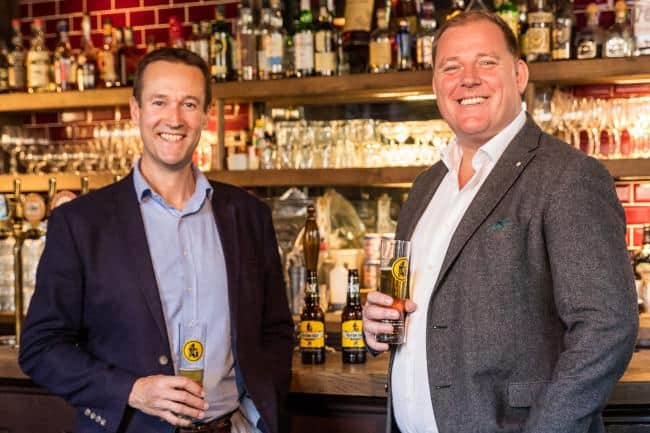 Hofmeister is a name  that transports us back to the eighties and nineties where bottles of the famous brew sat in the fridge of the family home or we may also have fond memories of the famous mascot George the Bear meandering across our TV sets.

Nostalgia and the warm feeling it radiates sells and this was a fact not lost on two entrepreneurs who saw an opportunity to create a beer that would tap into the affection still held for the brand, the original Hofmeister ceased production in 2004,  while also aligning with the burgeoning craft beer market.

The new Hofmeister was brought back to life by Richard Longhurst and Spencer Chambers who bought the brand from Heineken in 2016 and now have their headquarters in the Surrey market town of Dorking.

Hoffmeister Helles hit the market in the same year as brand rights were purchased and two new beers were launched in 2021 namely Hofmeister Weisse and Hofmeister Ultra Low 0.5%.

Longhurst and Spencer travelled to Bavaria to find a local brewery that could help re-invent it as an authentic, locally brewed super high quality Helles lager made in line with Germany purity laws that date back to 1516.

The duo are set on keeping beer production in Germany so that it retains its unique Bavarian character.

The Business Magazine has sampled the new beer and can confirm that it is several steps up from its predecessor that would be purchased from the supermarket bargain shelf when times were tight.

Richard Longhurst  said: "We always wanted to brew Hofmeister in keeping with the Germany purity laws. The quality of the product had to be as good as we could possibly make it.

Longhurst says they wanted to make it the “Dom Perignon of lager”.

“That was so important,” adds Longhurst. “It gave us a clarity of vision right from early on about what we wanted to achieve and how. It helped inform all our decision making. We had to have a liquid that we could justifiably call the equivalent of Dom Perignon in the lager category.”

Hofmeister has now won exclusive accounts at St. Pancras Renaissance Hotel and The Connaught Hotel, with off-trade listings including Ocado, Virgin Wines, Drink Supermarket and Beer Hawk and has tripled turnover over the  last 12 months.

The Surrey firm also recently completed a successful crowdfunding campaign on Seedrs which saw £968,444 raised from  409 investors against a target of £600,000.

The money will be invested in growing the company's distribution arm and a marketing surge which will also bring George the Bear out of retirement.

George, who featured in the company's crowdfunding campaign, will take a central role in the company's marketing activity over the next twelve months as it looks to reach a turnover target of £10m by 2025.

“We are absolutely delighted that we have been able to smash our target with such a phenomenal raise of money,” adds Longhurst.

“Crucially it has now set us up brilliantly to go into 2022 with new staff and money in the bank and we can go and hit the ground running.”

“It’s been a lot of hard work and every single one of our shareholders has contributed to our growth and we would not be where we are now without them.”

The company says it will continue to grow its e-commerce facility in 2022 as it looks to take advantage of the rise in online sales by ramping up its own direct to consumer platform, which it expects to make up 15% to 20% of its overall sales in 2022.