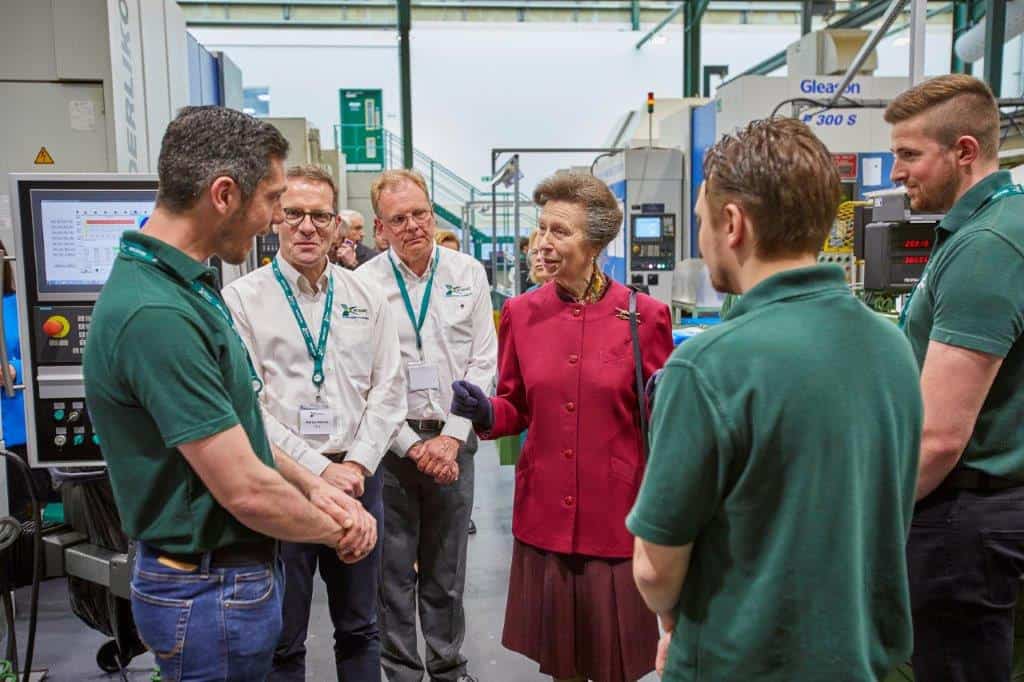 Her Royal Highness The Princess Royal’s visited the Xtrac headquarters in Thatcham, Berkshire, on Wednesday, 11 May.

The visit followed the presentation of the Princess Royal Training Award 2021 award to 46 businesses at a special ceremony at the Mansion House, London.

“Having twice received the Princess Royal Training Award, including in 2018, we were delighted to accommodate this visit following the recent official opening of our new apprenticeship academy,” said Peter Digby.

“We warmly welcomed her gracious comments about the hard work we put into our apprenticeship and graduate training schemes and that we should be justly proud of our success and achievements.”

Starting his career as a British Airways apprentice and Xtrac’s longest-serving employee, the company’s president has long supported the development of its apprentice scheme.

“Our training programmes provide a solid foundation underpinning the technical and sales success we’ve achieved since the company started in 1984.  Today, we employ almost 400 highly trained staff in the UK and USA.”

During her visit, the newly built computer-aided engineering classroom facilitated The Princess and Ms Donnelly participating in a round table discussion on ‘Females in Engineering’ with apprentice Faye Cooke and graduate engineers Jessica Matthews and Katie Parton.

The company’s chief executive, Adrian Moore, who began his career as an undergraduate sponsored by Rolls-Royce, is highly supportive of the company’s training programmes, which the board of directors and senior management team comprehensively endorse.

“Our training programmes strongly underpin the continual improvement of our capabilities,” said Moore.  “It receives the highest priority throughout the business, supporting the company demand for a highly trained multi-skilled workforce to ensure our customers have the best products and services.”

“It’s particularly relevant as we are at the forefront of a once-in-a-generation technology change as the motorsport and automotive industry transitions from the internal combustion engine to hybrids and electric vehicles.

"Empowering our employees ensures we have the best people delivering innovative solutions to our customers globally.

"The Queen’s Award for Enterprise similarly recognised Xtrac in 2020 with its Innovation Award for our advanced range of integrated lightweight electric vehicle transmissions.”