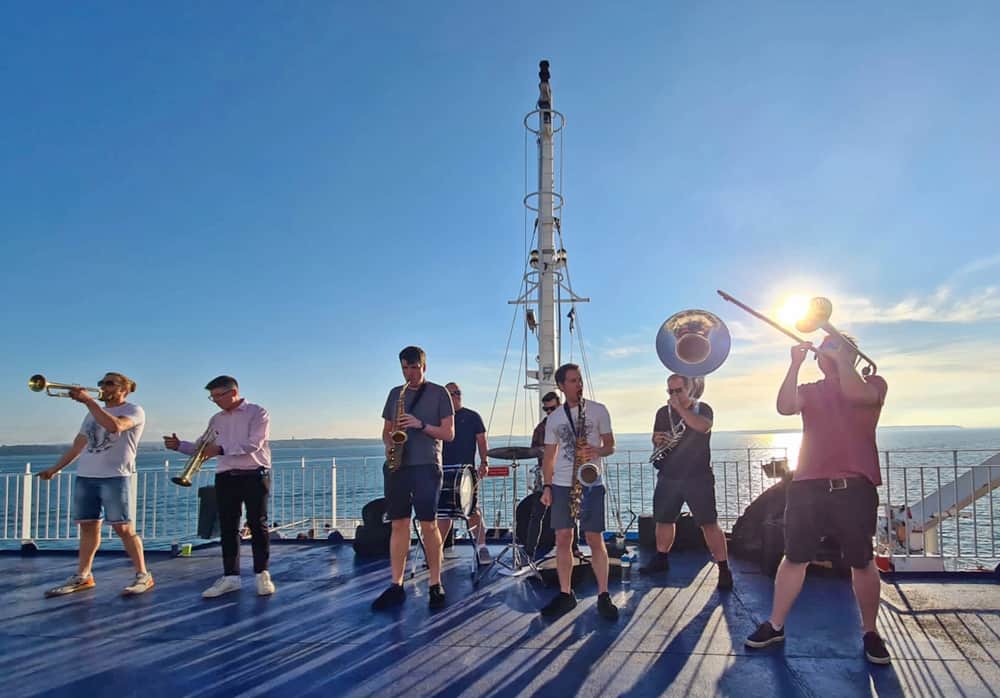 Over 14,000 of the 50,000 revellers at this year’s three-day Isle of Wight music festival travelled to and from the island with Wightlink. The company, ranked 68 in The Business Magazine's Solent 250 list this year, said it had been “all hands to the deck” to cope with the massive increase in travellers across the Solent.

The festival was cancelled in 2020 and then postponed from its usual June date this year until 16-19 September 2021. Wightlink laid on extra sailings on its three routes, car ferries between Portsmouth – Fishbourne and Lymington – Yarmouth and foot passenger FastCats linking Portsmouth Harbour and Ryde Pier Head.

Across all its services, Wightlink carried more than 14,000 revellers to and from the Island. Passengers were treated to live performances on some crossings by the Tuba Libres (pictured).

“Throughout the festival, all our ferries were busy carrying people to the iconic event and the atmosphere was brilliant,” said Wightlink Chief Executive Keith Greenfield.

“We always get involved at an early stage by shipping essential infrastructure such as lights and fencing to the Island. In addition, Wightlink is delighted to host some of the stars. This year we welcomed Sir Tom Jones, All Saints, Fleur East and Martin Kemp, Maisie Peters, DJ Example and the Tuba Libres, among many others.”

Preparations will soon start for the 2022 Isle of Wight Festival, with Lewis Capaldi already confirmed to perform.

Wightlink carries over 4.5 million passengers on more than 45,000 crossings a year on three routes between Hampshire and the Isle of Wight.