Associated British Ports' Port of Southampton has been named the UK’s Best Departure Port for the sixth year running.

Southampton is not only the UK’s leading cruise port but also Europe's number one turnaround cruise port.

As well as being the home port for world-famous vessels like Cunard's Queen Mary 2, the port regularly hosts cruise industry occasions such as the naming of the Royal Princess by the Duchess of Cambridge and the recent visit of Royal Caribbean's Oasis of the Seas, the world's largest cruise ship.

Next year will see the naming ceremony of P&O's new vessel Britannia, the biggest vessel built specifically for the UK market, which will have Southampton as her home port.

In 2013 Southampton saw more than 400 vessel calls, including P&O’s Oriana and Oceana, and over 1.6 million passengers pass through its four dedicated cruise terminals, as they embarked on holidays to destinations such as New York, the Caribbean and Norway.

“We strive to keep Southampton at the forefront of the cruise industry and this is proof that we are doing just that.

“With plans to invest even more in our cruise offering, there’s a real possibility that we could defend our title next year and make it a hat-trick for the City.”

The Cruise Critic UK Editors’ Picks Awards are chosen by Cruise Critic’s international team of editors, based on the lines, ships and destinations they feel best represent excellence in each of the designated categories, ranging from ‘Best New Ship’ and ‘Best Suites’, to ‘Best Shore Excursions’ and Southampton’s title, ‘Best UK Departure Port’. 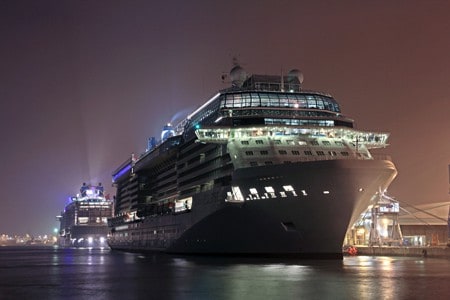 Ships Celebrity Eclipse and Quantum of the Seas berthed in Southampton