As Harmony of Seas, Royal Caribbean International’s latest ship and the world’s largest, arrived in Southampton last month, the cruise line announced a seven-year deal with the port of Southampton, worth £200 million to the local economy.

The deal was announced by the global cruise line’s strategic operation officer, Mike Jones, and the managing director of UK and Ireland, Stuart Leven, at the official Plaques and Keys ceremony onboard the ship.

It secures Southampton’s City Cruise Terminal as the official UK home of Royal Caribbean International along with £5.5m’s worth of investment from the holiday company.

The investment has so far enabled Associated British Ports (ABP), owner and operator of the Southampton port, to prepare the terminal for a new generation of ships heralded by the arrival of the latest addition to Royal Caribbean’s 25-strong-fleet.

The improvements made to the terminal have been designed to enhance the embarkation experiences for both passenger and crew. New paperless check-in for passengers and a kerb-to-gangway processing of only 10 minutes makes it the fastest route from home-to-international holiday for holidaymakers.

Other upgrades include improvement to layout and security screening areas, free wi-fi throughout the terminal, step-free-access to ships up to Royal Caribbean’s Quantum Class, as well as the addition of digital signage and ‘wow walls’ to build excitement as guests check in. New air-conditioning has been installed throughout the terminal and port staff will welcome improved logistics enabling the port to handle up to 500 tonnes of stores.

ABP Southampton is Europe's leading turnaround cruise port and can welcome even the biggest ships in the world. Thirty seven metres longer than the Eiffel Tower is high, and the length of four football stadiums, Harmony of the Seas is the world’s largest cruise ship at 227,000 gross registered tonnes in weight. Such record-breaking proportions have also necessitated the expansion of the port’s processing area to make City Cruise Terminal ship-shape for Harmony of the Seas and her guests.

Leven said of the deal: “Each year, more than 1.5 million holidaymakers either start or end their cruise holidays in Southampton, making the port Europe’s largest cruise ship hub. Such a busy passenger hub deserves best-in-class facilities and at Royal Caribbean we are constantly looking for ways to improve the passenger experience. I want our passengers’ extraordinary adventure to begin the moment they arrive at the Port, before they even step on board the ship.

ABP Southampton director Alastair Welch said: “We are delighted to confirm that the port of Southampton will be the official UK home of Royal Caribbean until 2023. This deal will secure the port’s reputation as the UK’s number one and leading European turnaround port long into the future. Equally, it is great news for the UK economy, and the landmark deal can only increase the significant contribution cruise makes to the 15,000 jobs and £1 billion economic contribution of the port.”

The announcement was made in front of Nick Farthing of Southampton Chamber of Commerce, as well local business leaders including ABP’s CEO James Cooper. In by-gone days the keys of the city would be given to the Captain; today, however, Farthing gave Harmony of the Seas captain Gus Andersson a plaque containing the city’s coat of arms.

In return, the ship gave Farthing and Cooper a print of Stephen Wiltshire’s artwork commissioned specifically for Harmony of the Seas. Currently displayed on board, the artwork was created entirely from memory yet perfectly captures the coastal cities of Barcelona, Palma de Mallorca and Marseille, three of the locations guests will experience when sailing on Harmony of the Seas after she sets sail on her inaugural voyage on the June 5 from Barcelona. 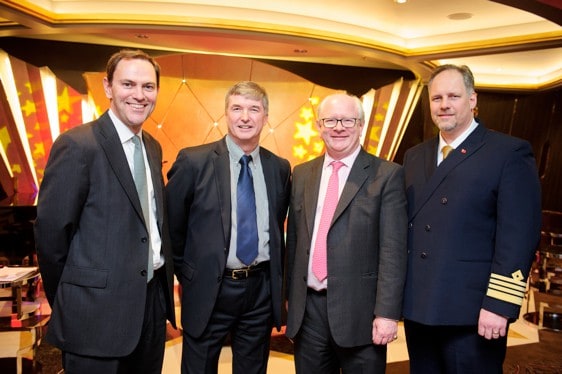