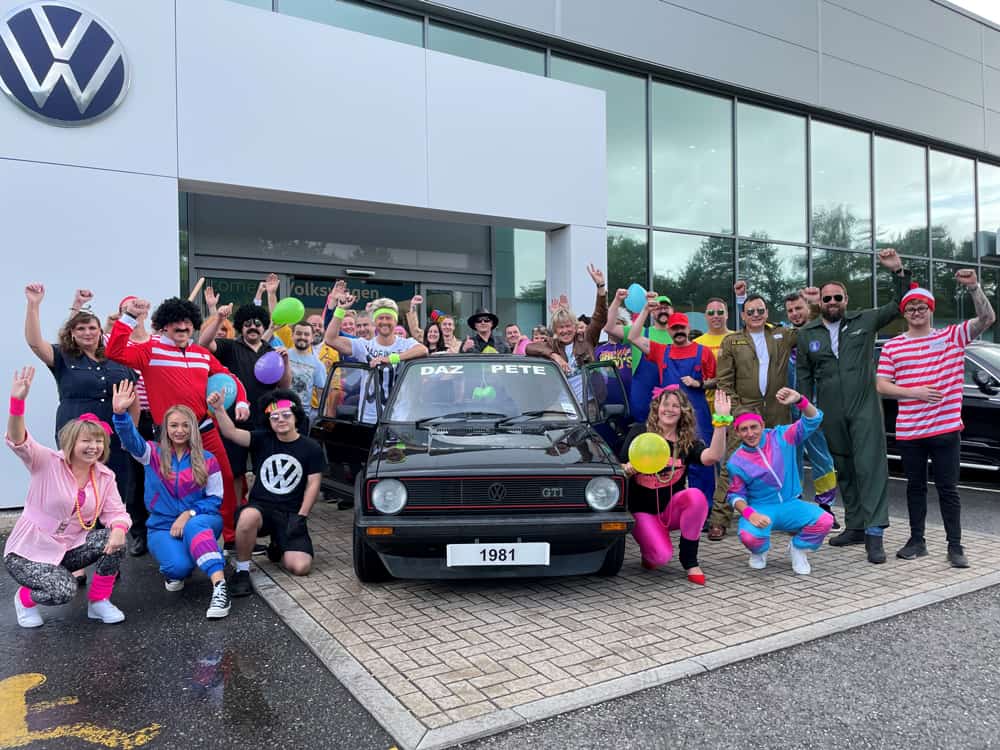 Staff at The Peter Cooper Motor Group dressed up in the 1980s gear to mark the company’s 40th anniversary.

The family-run South Coast Motor Group employs over 250 people across its ten businesses in Dorset, Hampshire and West Sussex.

Founder Peter Cooper and Managing Director Darren Cooper visited all of its businesses across the South Coast in a classic Golf GTI Mk 1, built in 1981.

As well as cakes, the company had organised authentic Volkswagen Currywurst sausages to be flown in from Germany for all their staff to enjoy throughout the day. Darren and Peter also had the challenge of choosing the best fancy dress winner for each site.

Managing Director of the Peter Cooper Motor Group, Darren Cooper said: "It was a fantastic day with one aim – for all staff to engage and be part of our celebrations. In recognition of our heritage, we decided to have an 80s theme throughout the day – who doesn’t like dressing up in this era?! The staff did the anniversary day proud and it was amazing to see everyone entering into the spirit of our celebrations and having so much fun."

It was very different to the launch of the first Peter Cooper dealership in Hedge End which attracted racing car legend Stirling Moss as its guest of honour.

In recognition to its 40 years, the Peter Cooper Motor Group has been fundraising throughout the year and is hoping to reach its target of £40,000. Monies raised will be split between two charities: Cancer Research UK and JDRF (Juvenile Diabetes Research Foundation).

Darren added: "The Peter Cooper Motor Group has always played a large part in supporting local charities; over the years we have raised hundreds of thousands of pounds for good causes which we will continue to do through our Foundation.

"Forty years in business is a great milestone to reach and one that we are all very proud of. Our teams work tirelessly to deliver great service to our customers and we look forward to our continued success. Being an integral part of our community has always been a key driver for us and we remain honoured to be able to support local charities through the great work our Foundation will continue to do."

The Peter Cooper Motor Group caters for all makes of vehicle, whether for new and used car sales, leasing or just a trusted name for service and MOT. It also specialises in electric vehicle charging point installations.

How the electric car market is accelerating at speed