In this latest Paris Smith client profile, The Business Magazine talks to Chandler’s Ford-based Churches Fire about the law firm’s support of its highly-acquisitive growth strategy.

Churches is a large player in the UK fire safety market that maintains the feel of a smaller business in its attitude to staff and customers. Its range of fire protection includes fire extinguisher and sprinkler servicing, maintenance and installation. The company also designs, supplies, installs and commissions a range of security services, including CCTV, intruder alarms and access control. 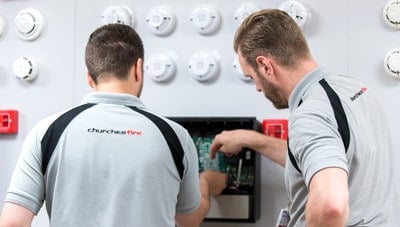 A national fleet of full-stocked vehicles driven by experienced technicians provide on-the-spot support to customers, so many issues are fixed quickly at the first visit and parts are readily available locally. Customer service includes a 24/7 emergency support line and Churches is a member of the British Automatic Fire Sprinkler Association and the Fire Industry Association.

The company was founded in 1992 in Winchester by Paul Topley. He grew the business out of his father’s electrical and mechanical services company, regarding fire safety as a relatively recession-proof option to start a new business. Over the past few years he has handed the reins over to a new senior management team to take the business forward. Horizon Capital, which specialises in investing in B2B services and technology companies, came on board as a major investor in 2017.

Acquisitions by Churches in the 2000s saw the addition of fire alarm expertise and in 2011 the company brought on [MOU1] a sprinkler installation and maintenance division. This meant the company could offer customers a single source for all their requirements. Chief operating officer Lorna Hayes said competitors typically rely on third party suppliers or else customers have to approach multiple providers for what they need.

“We are a true fire protection one-stop business with one phone number for everything,” said Hayes, who joined Churches Fire in 2010 as part of a team brought in by Topley. “Our growth up to then had been steady, with small acquisitions where we used different firms of solicitors,” said Hayes. 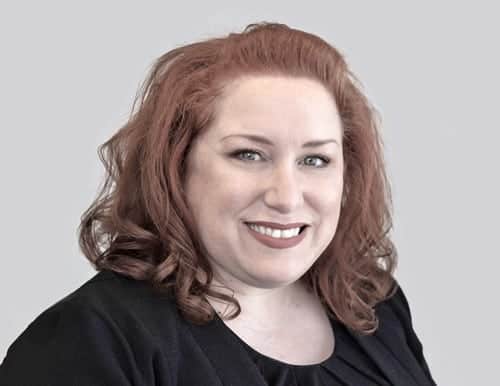 She was attracted to the company by its ambitious growth plans. When she joined, Churches had just made a significant investment in new enterprise resource planning software. “Such a large investment in technology in this industry was unusual, so I knew this was an innovative company with bold future plans,” Hayes noted. “For the past five years we have been completely paperless. In our industry I think we are cutting edge in the way we use technology to run the business.”

Another factor in Churches’ acquisitive strategy is how it invests in its employees and their integration into the company. “We’ve always been particularly sensitive about bringing in new colleagues and making sure they immediately feel part of our team,” said Hayes.

While negotiations with Horizon were underway, Churches was being advised by Amanda Brockwell, who was then head of the corporate team at law firm Coffin Mew. Churches was keen to follow her to Paris Smith when she joined the firm as a partner continuing her specialism in corporate mergers and acquisitions and investments.

“We had worked with Amanda on one of our previous deals and rated it one of the best that we’d done in terms of ease and support from our lawyers,” said Hayes. “For us, it’s not about the law firm, but the lawyer. It always has been.”

“I remember when I first met Amanda,” she recalled. “I was struck by how thorough and collaborative she was. I come from an HR background so to go into a room full of lawyers for a pre-deal meeting was an eye-opener for me. She really helped me to navigate through the process. It’s really wonderful to receive that level of support in all our interactions. Churches has a very open and honest relationship with Paris Smith.”

She added: “Fire safety is very much a cottage industry that Amanda has a deep knowledge of. We always feel we are in a safe pair of hands.”

Paris Smith’s relationship with Churches Fire has gone from strength to strength since then. With Brockwell as the key point of contact, other services provided by the firm include working with partner Laura Trapnell on GDPR issues, partner Chris Holliss on business dispute resolution work, and partner Clive Dobbin on employment issues.

The Horizon investment was completed in 2017 and the new stakeholder in the business has also been happy to retain Paris Smith as Churches’ main law firm. “It’s nice that they have also kept with us rather than insisting on using their own London-based lawyers,” said Brockwell.

The relationship with Churches is based on Paris Smith being open and transparent with its client. Brockwell said: “They challenge us on things, which is the sign of a strong relationship and they are always very fair to deal with.”

Rapid growth since 2017 has seen Churches’ turnover increase from £3.5 million to £42m. “We currently have five acquisitions in the pipeline,” said Hayes.

The workforce is now over 450, with over half of them technicians and around 50 project managers, fire risk assessors and designers. Most staff are based at the company’s head office in Chandler’s Ford with a team of account handlers at its other main office in Dinnington. 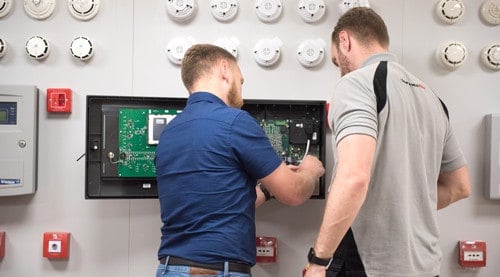 Churches has taken a ‘Google-style’ approach to the modern design of its head office, so staff feel motivated, relaxed and looked after. “We make our office space pleasant to work in. A lot of our people spend a lot of time on the road, which can be quite lonely, so having a welcoming office environment is important,” said Hayes.

The original directorate is still heavily involved in the business along with the new wave of directors. “It is a great collaborative environment of experience and new skills that will keep us moving quickly,” said Hayes.

The company’s expansion has seen it recently strengthen the leadership team. It has set up an M&A department, led by M&A director Stephen Riley and integrations director Simon Burns. Charlie Haynes was appointed CEO in May 2019 and David Chennell joined more recently as CFO.

“We’re really pushing into new areas, especially in security and fire doors. We are now a top-three provider and probably one of the fire safety industry’s fastest growing integrators,” said Hayes.

Churches’ customer-centric approach is typified by the service it offers when products need to be replaced. “Most competitors charge for the parts plus the labour cost. We have a set price, however long it takes to swap out the parts. This not only streamlines our business but it gives our customers real transparency in what we do,” notes Hayes.

A similar caring approach and attention to detail is what keeps Churches’ relationship with Paris Smith so strong. “The secret of our successful relationship is understanding their business goals and drivers, as well as their culture,” said Brockwell.

For Hayes, the approach of Brockwell shines through. “It’s unusual for businesses to have women in senior positions and I think we pave the way for others, which Amanda does through her professional work and in mentoring her colleagues. She clearly cares about her profession as well as her clients,” said Hayes.

What to expect from The Business Magazine site in 2022