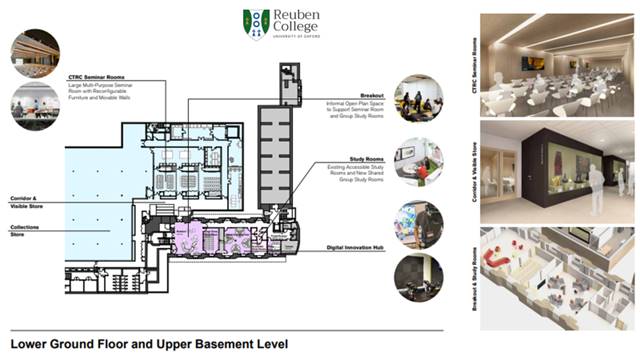 Having won the much-contested Oxford University Estates Department tender in early 2020, Morgan Sindall Construction secured one of the first tendered projects - the establishment of the first new college in the University in 30 years.

The project involves combining and refurbishing the Grade ll listed Radcliffe Science Library (the 1901 Jackson building and the 1934 Worthington building), the western wing of the Inorganic Chemistry sub-Department, and the 160-year-old Abbot’s Kitchen, the oldest known purpose-built Chemistry laboratory. These buildings will create a new college facility for the post-graduate students of Reuben College, named in July 2021 following a £71m donation from the Reuben Foundation.

Following securing the project in April 2020 and after entering into a pre-construction service agreement, it became apparent that the Jackson building contained significant levels of asbestos, including in the wall plaster, which is extremely rare. The project team, the University, and the college worked together with Morgan Sindall Construction to safely survey the building, and develop a design solution which removes the asbestos without harming this historic building.

The refurbishment includes a new kitchen, college common room and social and study areas as well as office spaces for staff. The development also includes a new dining hall, featuring vaulted ceilings and exposed timbers that can typically be found in older, more traditional Oxford colleges. The contractor is also working on improvement works in the college quad and the library, which is moving to occupy the top floor of both the Jackson and Worthington buildings.

The basement below the college will house a new climate-controlled storage facility where the University’s four Museums will house some of their most important collections, and provide the space for a Collections Teaching and Research Centre.

Morgan Sindall Construction boasts an extensive track record in building high-quality educational facilities, including navigating live sites where teaching is still taking place. It is working collaboratively with the University to keep disruption to academic activities to a minimum and works outside of university hours when necessary.

Area Director at Morgan Sindall Construction, James York, said this of the project: “The lead into this project has been extremely challenging, and the building has thrown things at us that no one could have ever expected. I’m extremely proud of how the team has tenaciously stuck to the task, and worked with the University and the college to create a solution to unlock what will now be a fantastic new facility.

“We share an aligned vision with the University for a constant commitment to excellence. The entire team has worked incredibly hard so far as the project involves a careful balance of improving the building whilst retaining features expected in a Grade II listed building. Once complete, we will handover an outstanding teaching and social space which will attract students from far and wide.”

The president of Reuben College, Lionel Tarassenko said: “Reuben College welcomed its first cohort of 120 students (from 47 different countries) in October 2022, but we will not feel like a fully-fledged Oxford college until we move into our own buildings. We are very much looking forward to occupying the refurbished heritage buildings in time for academic year 2023-24.”

Reuben College is the University of Oxford’s first college to be founded in the 21st century, and is dedicated to graduate study with a focus on interdisciplinary research addressing 21st century challenges. The buildings are set to be handed over to the college after Easter 2023.