Bournemouth: Drewlec in management buyout from the Drewitt Group

The deal, which involved the purchase of all Drewlec shares, enables Hand to drive the company further forward as a separate entity to the Drewitt Group, which remains in the control of Richard and Gillian Drewitt. 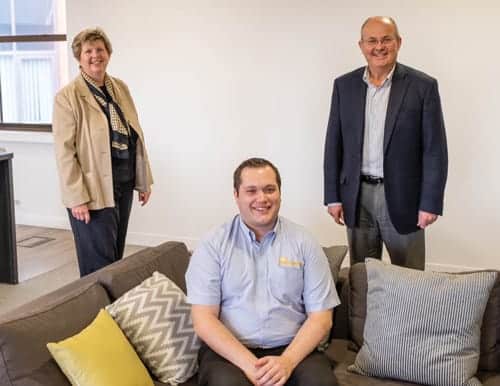 Richard and Gillian Drewitt said: “As with any family-run business, succession planning starts almost as soon as the new generation takes over from the last. It became clear that the right decision for the future success of Drewlec was to look outside of the Drewitt family, handing over the firm to someone who understands and represents the strong family values established over the years. Nick began his career at Drewlec as a trainee contracts manager in 2011 and has progressed through the ranks of the firm. The inevitable career progression for him was to lead the firm, and we are delighted to be able to hand Drewlec to someone who has been so integral to the company’s recent success.”

The Drewitt Group was started as a father and son painting and decorating operation more than 140 years ago, by Charles Henry Drewitt and Charles James Drewitt. In 1964, the Group diversified and introduced Drewlec Electrical Services to complement the Group's extensive construction operations. Brother and sister, Richard and Gillian Drewitt, have led Drewlec and the Drewitt Group for more than 30 years, witnessing how the Group has positively contributed to the development of landmark buildings in Bournemouth and the surrounding areas.

The change of ownership does not affect how business is conducted going forward. The services and the workforce remain unchanged, as does the company’s location at Drewitt House – an address the company has been based at for more than 50 years.

Richard Drewitt added: “Nick is a long-serving member of the team and under his stewardship and ownership Drewlec will retain the Drewitt ethos and values that have underpinned the business since the beginning. He is experienced at the helm and will guide the company on the next phase of its journey. We wish him every success in the future.”

Hand commented: “I’m delighted to be leading Drewlec. We have a great team, fantastic client base and a very resilient business. As far as our customers and staff are concerned, it’s business as usual with our focus remaining on providing exceptionally high levels of customer service underpinned by the core family values established by the Drewitts. I am looking forward to continuing the progress we make, focusing on future improvements and driving sustainability.”

The company has recently won a major contract with Dorset County Hospital which will see the installation of an Advanced MX5 Pro fire alarm system across the whole site. Following an 18-month installation programme, the completed system will have more than 4,500 devices connected which will include automatic smoke detectors, visual flashing beacons, alarm sounders and call point alarm activation buttons.

As part of the installation, a graphics system will be set up to enable users to see in real-time, on a large display screen, the location of any fire alarm event across the site enabling faster response times. On install completion, Drewlec will then commence an initial 12-month servicing agreement to maintain the system.

Drewlec is also an authorised installer of electric vehicle charging points by the Office for Low Emission Vehicles (OLEV). With a UK ban on new petrol and diesel cars set to be introduced from 2030 under the Government’s green plan, Drewlec aims to assist local authorities, private businesses and apartment complexes in an effort to build up Dorset’s electric car charging infrastructure.

How can I be sure my portfolio is green and not greenwashed?