Who better to ask to design a logo to help a company mark its 40th year in business than its staff?

That’s just what Darren Cooper, managing director of The Peter Cooper Motor Group did. The judging panel received a fantastic response from a number of staff and their families, with some amazing designs coming forward. The remit was to design a logo that showed the companies heritage; starting in 1981 with Volkswagen, which the company is locally famous for, to now representing a group that sells and maintains cars of all makes and models. 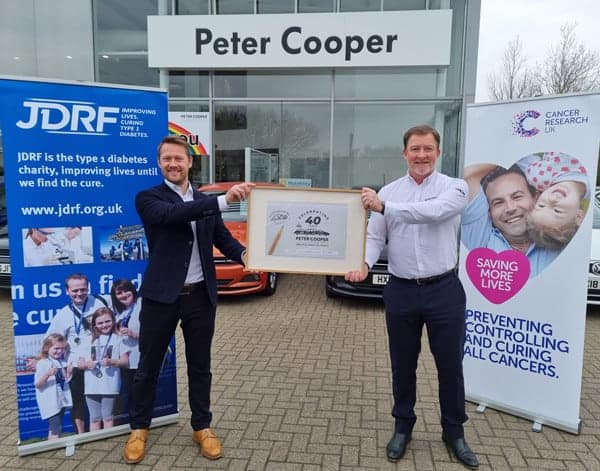 Cooper said: “Choosing a design was really hard as everyone had clearly put a lot of thought and effort into their designs. Ultimately, someone had to win and it was the design by Peter Hand, brand manager at Peter Cooper Portsmouth, that caught the judges’ eyes.

“It marked the year we were established, 1981, and underlined our journey to now selling cars of all makes really well. Peter’s design will feature on all The Peter Cooper Motor Group’s marketing collateral this year including car stickers, pin badges, point of sale, and of course the website and other advertising.”

Hand won £500 to go towards a charity of his choice. He chose to donate it to the Peter Cooper Motor Group Foundation, which is raising £40,000 for two charities, JDRF and Cancer Research UK, to mark the company’s 40th anniversary. Generously, Hand also added another £250 of his own money to Cooper’s ‘Footdown Out of Lock Down’ charity challenge, whose funds will all go towards the Foundation’s target.

It was a gesture that touched Cooper who said: “It’s a brilliant design and we are delighted to use it on all our marketing this year. Peter has also helped us get underway with our target to reach £40,000 for two fantastic charities.”

Hand said: “I was very proud to win the logo competition and it proved a great way to spend some design time over a glass of wine. Raising so much money for two amazing charities is the icing on the cake for me.”