Reading 2030 conference hears opportunities that lie ahead for Thames Valley 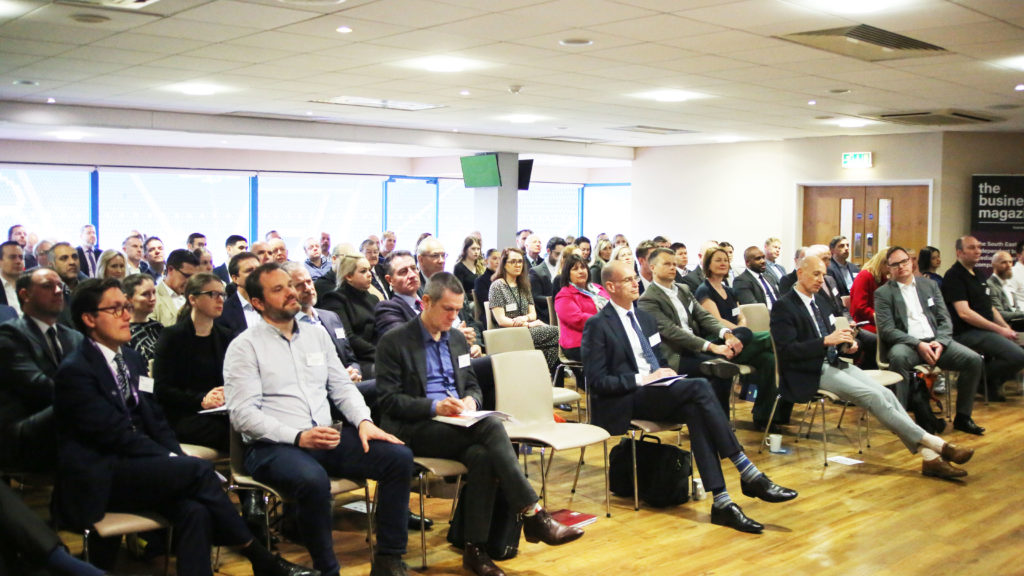 Around 100 local businesspeople filled the Windsor Lounge at the Royal Berkshire Conference Centre on 2 March to hear about Reading's future.

An expert panel at the Reading 2030 conference gave very timely insights on work spaces and skills, the town’s infrastructure, driving towards carbon net zero and the impact of the Elizabeth Line.

Technology companies play a big part in the economic success of Reading and the Thames Valley, but the town risks being left behind by a skills shortage, warned Alex Tatham, Managing Director of technology distributor Westcoast.

“We’ve lost a lot of the uniqueness that has attracted so many technology businesses to the region, particularly having people with the right skills, especially in the growth areas of green tech and health tech,” he said.

“It is incredibly important for Reading in 2030 to be well covered by, and investing in, these areas,” he added.

“There just aren’t enough skills to move traditional businesses into the cloud,” noted Tatham. “And you can expect to have to pay a six-figure salary for a cyber security expert.”

“Reading is only ranked 17th in the current list of the UK’s smart cities, which is an embarrassment,” he said. “A smart city needs smart people. More skills will drive Reading to be a better smart city.”

Reading’s technology sector must look to the next generation, he believes.

“Businesses should support local schools by promoting technology subjects. Don’t blame the education system – businesses have the responsibility to train and advance people. Also, we can donate unwanted equipment to schools.

“Companies can be part of the education curriculum. I am certain that this is what will help to put Reading at the heart of technology skills for the future.”

The Covid-19 pandemic has turned traditional office work patterns on their head, a fact that Adrian Norman, Head of Design at office design and refurbishment specialist Morgan Lovell, is helping employers to address by making their offices more of a ‘destination’ that employees want to go to.

He identified four emerging trends that share a common thread: facilitating hybrid working, diversity and inclusion, use of technology and a focus on sustainability.

In fact, a Morgan Lovell survey found that 87% of respondents said they wanted to use offices to collaborate and for social interaction, with mental health a driving issue. Others also want quiet spaces in offices where they can concentrate on work.

Norman thought the balance between working at home and in offices is eventually likely to settle at around three to four days per week.

“We are designing office space around activity-based working and also working around the individual, so their choices are listened to,” he said.

As an example, the firm recently helped Canada Life to reduce its dedicated desks from 700 to 400 to create more shared space.

While mobile giant 3’s new office in Reading’s Green Park has been designed by Morgan Lovell as a ‘destination’ for staff by offering a range of facilities that make it a better place to work.

“We are seeing the Internet of Things and apps being used to manage the user experience of buildings, for both visitors and employees, from signing in to choosing where you work and selecting what you want to eat for lunch,” said Norman.

Like the changing priorities for office space, Reading’s property market is also undergoing a shake-up.

“The development land market is performing very well in the period of post Covid recovery and continues to be driven by a high level of demand. During 2022 we expect that developers will re-gear for growth, although build costs and rising inflation could temper things,” said Phil Brown, Head of Savills’ Reading office.

“Build to Rent is an emerging sector that has gained significant traction nationally and in Reading, where new schemes such as Station Hill are being delivered. A shortage of traditional rental and housing stock creates opportunities for private landlords and small investors as well as for Build to Rent providers, so it is a good time to be a landlord.”

Meanwhile, Prime Minister Boris Johnson’s Levelling Up agenda could see the reintroduction of strategic local planning that Brown said had been largely abandoned in 2010.

“Oxfordshire is a forerunner where authorities have been working together on a shared vision to form plans based on improving the regional economy,” he said.

Climate change is having an impact on where we live, which was brought into sharp focus by the recent COP26 climate change conference.

“The built environment is so important to how we address climate change,” said Brown.

A good example of what the future could look like is a development of sustainable homes in Oxfordshire built by Greencore that independent tests have shown will have negative whole-life carbon emissions.

“This development is a significant step forward as it paves the way to transition to the mainstream and this pricks up the ears of investors,” said Brown.

“The window of opportunity to achieve net zero is closing, but cities offer us hope,” he said. “With about 70% to 80% of the world’s population living in cities, reducing carbon emissions in them is crucial.”

Like many authorities, Reading declared a climate emergency in 2019. “So, its local plan already includes policies aimed at getting to net zero,” said Witchalls.

“But you have to be realistic – carbon offsetting everything is not the answer,” he added.

“We have to do something more than reducing carbon footprint through electric vehicles (EV)s - you'll still get congestion,” he said.

“Our research shows that there is a trend away from a car-based society by younger generations, who prefer to spend their money on other things. This is an opportunity that we should capitalise on.”

Despite Reading’s 1960s ‘concrete collar’ inner distribution road hampering some efforts on infrastructure improvements, the town centre has seen a fall in car usage from 70% about 20 years ago to less than 40% today, observed Witchalls.

“Reading has a ‘placed-based agenda’ that offers hope with less car use and being safer to walk and cycle,” he said.

He gave the evolution of the town’s Green Park from being just another out-of-town scheme to one driven by the Environment, Social and Governance (ESG) policies of the companies based there as a good example of a change in thinking.

“Green Park is looking at better access and a healthier environment. We have mixed-use there with residential housing, plus a new railway station and a rapid bus service into Reading.”

Like Tatham, Witchalls said local businesses must be at the forefront in pushing for change.

“As business leaders, we can help by getting messages out there. People need to see the benefits. This isn’t just about technology, buildings and infrastructure, it is about communities.

“We have to promote behavioural and societal change and then we have a chance of getting to net zero carbon emissions by 2050.”

Although 22% over budget and several years late, the Elizabeth Line is nearly here. Services from its western terminus in Reading to Paddington began in 2019 with trains due to run through London by the end of this year.

“There will be big reductions in journey times. This has been a great collaboration with our stakeholders to bring a better service that will boost the UK economy by £42bn.”

From 2026, the line is expected to serve 170 million passengers a year and bring 1.5 million people within 45 minutes of key employment districts.

As well as shortening journey times from Reading, it will connect Heathrow with central London and, via an interchange at Farringdon, will make travelling north to Luton airport and south to Brighton easier.

Elizabeth Line trains built in Derby using signalling made in Chippenham have nine carriages that can carry 1,500 passengers and are due to run every 15 minutes.

“We have seen seat occupancy leap back from a pandemic low of 30% to 92%,” noted McCloud.

A benefit of the Elizabeth Line should be in taking cars off roads. Travelling by road is also undergoing an energy-focused transformation. From its UK head office in Slough, Hitachi is using the UK as its incubator for e-mobility initiatives said James Stevenson, UK Lead at Hitachi Zero Carbon Fleet, who discussed the future of transport zero-carbon mobility.

“The first wave of low carbon technology were developments like heat pumps and solar, followed by real-time energy management to reduce consumption and improve asset efficiency. The third wave in energy is around transport,” he said.

Hitachi is developing ‘tri-modal’ trains capable of running on diesel, electrified lines and using their own electric batteries. Any surplus electricity they generate can be sold. The same principle applies to electric buses.

“Transport depots will become charging hubs that others can use or they can sell power to the national grid,” he said.

“Reading’s vision for 2030 will depend on businesses to create the change,” he added.

“Vehicles will have a huge impact on the energy revolution, for example, the concept of closed group charging hubs, with the ability to share infrastructure to minimise waste. Businesses could offer their EV charging spaces for pre-bookable private use when they don’t need them.”

While Hitachi is working on large-scale ideas, he said plenty of smaller providers and apps can help businesses understand the benefits of transitioning to EVs.

At the end of the conference, there was just time for a brief audience Q&A.

Questions about the Elizabeth Line included one on loos (they don’t have them on board trains as this wasn’t in the original build specification) and lowering train fares to encourage people back to working in offices (Elizabeth Line doesn’t set the fares, that’s Transport for London’s job) to cutting services if post-pandemic demand is not there (Elizabeth Line is urging that services are kept at their planned levels).

Another question was on the timescale needed for strategic thinking and the difficulty in accurately predicting what changes businesses need to make now.

Tatham said: “It’s hard to have a strategic timeline in IT as new stuff is always coming along. I think the pace of technology change means you need the skills now and people who can adapt quickly to what’s needed.”

Witchalls added: “The UK isn’t good at delivering infrastructure. We have to be realistic. We can make small changes that make a big difference, as we have seen with working from home during the pandemic. Community-based decision making is needed. We can create a vision but can’t rely on government alone to fix things.”

Brown said: “We shouldn’t treat Reading in isolation. We need to reintroduce strategic planning for the Thames Valley, with local authorities all collaborating on our future.”

Positive feedback from delegates after the conference included an appreciation of the "punchy and factual" content from the speakers.

future of our towns and citiesreading 2030