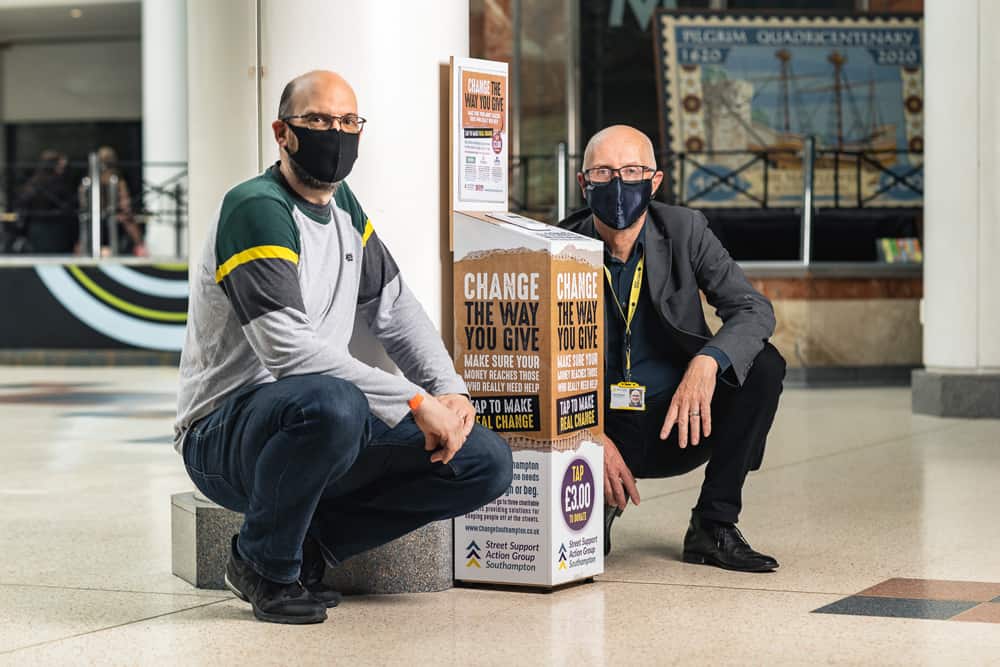 New contactless charity donation points have been installed across Southampton as part of the 'Change the Way you Give' campaign.

Two Saints, No Limits and Society of St James are the three local charities benefiting from the campaign, launched by the Street Support Action Group Southampton and funded by GO! Southampton to help support rough sleepers in the city.

Street Support Action Group Southampton was formed in 2017 with a community-led approach to help make Southampton a city where no-one needs to sleep rough or beg. The Group is working with GO! Southampton to make sure money that is donated by Southampton’s visitors and residents reaches those who really need it.

Six contactless donation points have been installed in Southampton Central Library, The Marlands shopping centre, Tudor House and Garden and SeaCity Museum, as well as two in Westquay – one at the customer service point and the other in Westquay South. There will also be a dedicated website for donations which will be given to support specific projects provided by the charities – and all projects were chosen by a panel that included individuals with lived experience of sleeping rough in the city centre.

The city’s Business Improvement District (BID), GO! Southampton, has funded the installation of the donation points in the hope that visitors and residents change the way they give to charities that support young people who need a place to stay and rough sleepers in the city. Rebecca Handley, deputy executive director, GO! Southampton said: "We’ve been working hard with the Street Support Action Group who provides support to homeless people in Southampton and share its vision to make the city a place where no-one needs to sleep rough or beg. We’re pleased to be launching the 'Change the Way you Give' campaign and urge Southampton’s visitors and residents to look out for the new contactless donation points and consider this as an alternative way of giving to a good cause."

Trevor Pickup from the Society of St James said: "As a charity, we provide a range of housing and support. We are aware that Southampton’s generous visitors want to help homeless people, but that people are also concerned that their money is used wisely. We provide assistance to those suffering from alcohol or substance abuse – things that often lead to homelessness in the first place – and mental health problems. We also provide basic necessities to those who are getting back on their feet and offered accommodation for the first time to get them off the streets. Donations can really make a difference and we really would encourage people to consider changing the way they give in the future by using these dedicated donation points."

Laura Read, general manager at Westquay commented: "Westquay is proud to support this new initiative to help reduce homelessness within the city centre and we’d like to thank our customers in advance for donations made via the stations within the centre."