JB Corrie, one of the UK’s leading fencing design, manufacturing and installation companies, has appointed Gordon McKinnell as sales and operations manager. 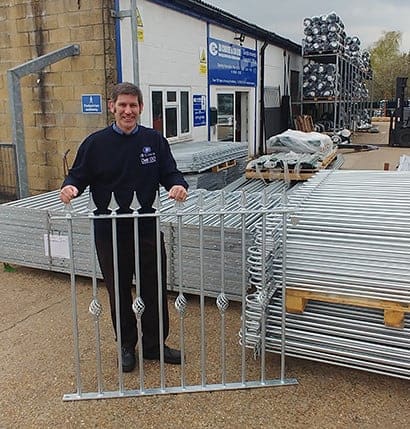 Gordon McKinnell, sales and operations manager at JB Corrie - a leading manufacturer and installer of fencing and steel fabrications.

JB Corrie is a family-owned British company that has manufactured and supplied commercial, sports facility, security and domestic fencing for over 100 years. It is also the UK’s first padel tennis court system manufacturer. The game is enjoying an explosion of interest in this country and McKinnell’s passion for sport sees him well-placed to oversee rapidly growing sales of the company’s courts.

Chichester Racquets and Fitness Club is just one of the many UK venues to offer this popular sport, which requires courts that are only a third of the size of a tennis court enclosed under an open roof or canopy. The Club will be hosting a padel tennis tournament with international padel tennis champions to showcase the sport this Saturday, 24 April.

“It is an exciting time to join this progressive company with such a strong history,” McKinnell says. “As well as being the leading suppliers and manufacturers in fencing and steel fabrications across a range of sectors, we are seeing soaring demand for our padel courts.”

JB Corrie has supplied tennis courts to Lawn Tennis Association clubs and the private market for many years. In Spain, padel tennis is second only to football (the game was invented in Mexico in the 1960s). JB Corrie is the only company to design and manufacture courts entirely in the UK to LTA and SAPCA guidelines that specifically cater for the great British weather.

McKinnell brings a wealth of industry and manufacturing expertise to his key role of contributing to the company’s overall growth strategy. Prior to his appointment, McKinnell was a project manager with Basingstoke’s Winkworth Machinery, the UK’s largest industrial mixer manufacturer, responsible for leading new machinery delivery. He also brings with him a global background in engineering and technology.