Plans for a global creative media and film hub in Reading have been given a further boost as the University of Reading has made a new proposal for a purpose-built TV studio. 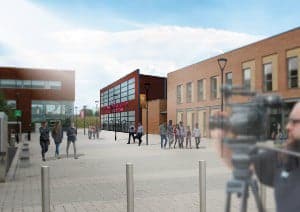 The new TV studio would be developed at Cine Valley on the Thames Valley Science Park site near Shinfield.

The University of Reading is presenting a planning application to Wokingham Borough Council this week for comment. The TV studio, which aims to be operational early next year, would host a range of popular TV shows and is being developed to accommodate the latest technology.

Darren Browne, commercial director at the University of Reading, said: “The interest around Cine Valley has been exceptionally strong and we look forward to developing the plans in partnership with and for the benefit of the local community and our students.”

The planned studio building has been designed to be constructed in a matter of weeks rather than months, significantly reducing the impact of construction on existing businesses and the local community. The finished studio would bring new jobs in the creative industries to Thames Valley Science Park, but with a lower density of staff or road traffic associated with a traditional office development.

“As part of the Cine Valley development, we will look to develop a pipeline of local talent, which will include training in many aspects of the film and television industry. This will help to ensure that production and talent aren’t lost overseas and the UK will remain at the forefront of the creative and technology industries.

“There is significant demand to expand production capabilities in the UK, and this has only increased in the light of the coronavirus pandemic, which has seen a sharp increase in content consumption and a pause in production.”

The new development is being planned in keeping with the principles of the University of Reading of community, engagement, sustainability and excellence. People, and the development of a strong community, will be at the forefront of plans, including putting diversity and inclusion at the heart of decision-making.

A range of initiatives are being discussed to encourage engagement with the local community, such as outreach schemes with schools and young people, and giving local people new opportunities for work and entertainment. The development will also uphold values of environmental sustainability, supporting the University’s aim to become carbon neutral by 2030.