Snows has appointed Paul Rabbetts as sales manager for its Mazda Chichester dealership. 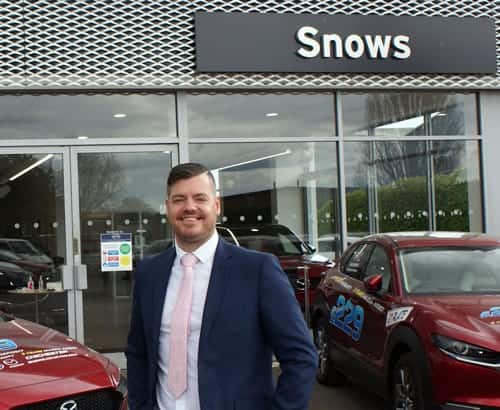 Snows Mazda Chichester was established following Snows’ acquisition of the multi-branded Portfield dealership in January 2018. Headquartered in Southampton, Snows is in its 59th year of trading and employs more than 950 staff.

Rabbetts started his career in 2001 as a trainee with Cambridge Garage Volvo and was headhunted a year later by White Rose Volkswagen in Petersfield. By 2011 he was general sales manager, running split sites for both its new and used vehicles.

Rabbetts said: “I have followed Snows closely over the years and admire the way the company has retained its private, family ownership and reputation for fantastic customer service, whilst achieving continually impressive expansion.

“When I was approached to join Snows and represent the reputable Mazda brand, I was honoured. I have inherited an extremely loyal and knowledgeable team at Snows Mazda Chichester, which I plan to expand further. I also aim to increase our used car stock holding whilst maintaining and strengthening Snows’ reputation for excellent customer service.”

Snows’ chief operating officer, Neil McCue, said: “Paul is a talented professional who has risen naturally through the ranks thanks to his ambition and leadership skills. I have every confidence that he will lead the team at Snows Mazda Chichester onto further success.”

Snows Mazda Chichester is located at Quarry Lane and has 4.7, stars out of a maximum of 5, for Google reviews; one of the latest was a 5-star experience, with a car-buying customer saying how “incredibly helpful and professional” the team was.