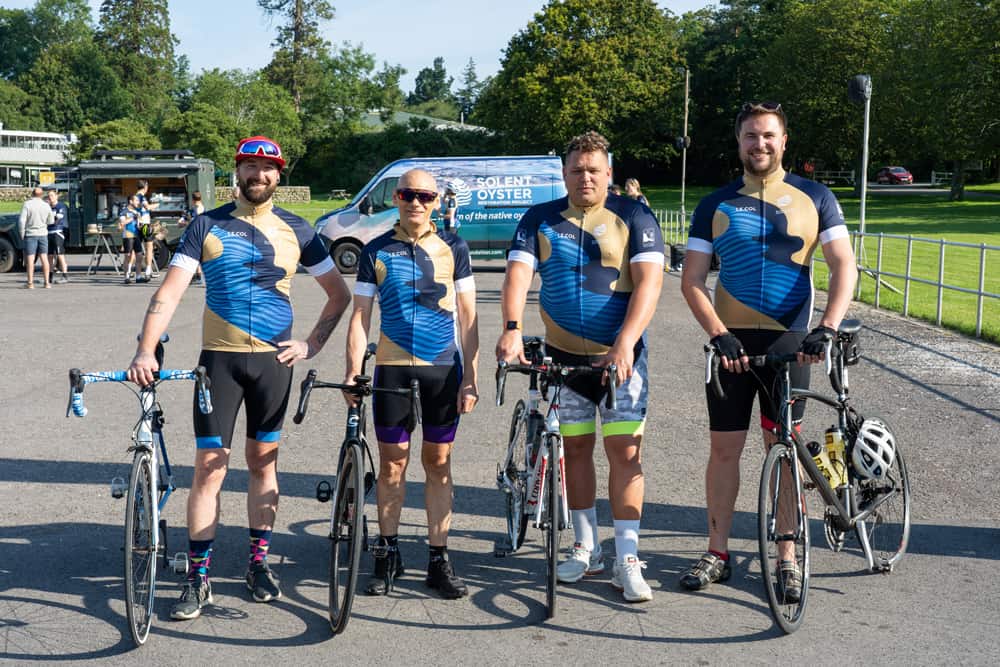 A team of four Sunseeker International employees are taking part in the Blue Marine Foundation (BLUE) 2021 South Coast Challenge. Starting on 9 July, the challenge will see over 30 cyclists conquer 210 miles across the next three days.

Jared Hall from Sunseeker’s design team, Jamie Morgan and John Bytheway from the Poole teams and Timothy Robinson from Sunseeker’s facility in Osprey Quay in Portland, will be getting on their bikes to help raise funds for the incredible work of BLUE, a UK-based charity dedicated to restoring the world’s oceans to health by establishing marine protected areas and tackling overfishing. Its aim is to see at least 30% of oceans under effective protection by 2030.

Over the next three days, the riders will go through two areas of outstanding natural beauty, three national parks, and some of the most iconic coastline in the UK. As part of the challenge, which starts in Beaulieu, Hampshire and ends in Plymouth, Devon, riders will be visiting three BLUE projects along the route to see first-hand some of the great work made possible by the money raised from the challenge.

The projects include the Solent Oyster Restoration project – helping to restore oyster beds that filter the water column and provide habitats for hundreds of species. This project has already seen some fantastic results, with 12 dedicated sites and 69,000 native oysters returning to the Solent. Riders will also visit the charity's flagship project in Lyme Bay. BLUE has developed a win-win model that benefits the marine environment and has resulted in a 52% increase in species through a sustainable fishing programme. Lastly, the challenge will take them to the Plymouth Marine Park, the first maritime national park in the UK, which aims to involve people in the stewardship of UK coastal waters and bring a wealth of benefits to deprived coastal communities.

Andrea Frabetti, CEO at Sunseeker International, said: "We are very proud of the team for accepting this fantastic challenge to help raise money for BLUE and are delighted to be sponsoring this event. Everyone at Sunseeker will be cheering them on as they complete this worthy cause, and we hope that the event raises much-needed funds to support the future of ocean conservation."

Sunseeker’s sponsorship of this event follows a partnership project devised by BLUE and Sunseeker called Project Menorca which was created to help create a tangible difference in protecting the marine environment in Menorca. Today, it is recognised as a pioneering programme, providing a blueprint for best practice worldwide. The project supported local fishers by creating sustainable fishing methods. Also, the project worked to remove plastics and ghost nets from the sea and distributed recyclable materials across the island. The project ran for just over two years and saw the implementation of a widespread education programme, a reduction in single-use plastics by local fishmongers, 143 beach cleans, and 13.5 tonnes of plastic cleared from the island.

Sunseeker is a brand for luxury performance motor yachts. Originally named Poole Power Boats, the company was founded by brothers Robert and John Braithwaite in 1969. The company changed its name to Sunseeker International in 1985.

In August 2013, a majority stake in the business was acquired by Wanda Group, the Beijing-headquartered conglomerate with strong footprints across China, Europe and the US. Wanda Group is a committed long-term shareholder providing strong financial and strategic backing for Sunseeker’s continued growth and success.

From its manufacturing base in Poole, Dorset on the south coast of England, Sunseeker employs c.2,000 people and produces around 150 boats every year ranging from 38-161 feet with 95% being exported.