The pros and cons of the lockdown will continue to be argued for years to come. Sadly, one area where there is no argument concerns the educational attainment gap. All children have had their educational development stultified by the lockdown. However, the evidence is unambiguous that children from more disadvantaged backgrounds have been most adversely affected.

Many young people have lost a basic sense of structure and direction as a result of the lockdown. This threatens to create an environment in which dangerous out of school distractions take over. Earlier this month, an investigation by The Times reported that staff at a third of secondary schools in England believe that their pupils are involved with gangs. A survey of teachers at nearly 1,300 schools revealed that children as young as eight are being groomed by gangs and exploited by drug dealers, with pupils bringing zombie knives, hammers and knuckle dusters into classrooms. The analysis, covering schools with about half a million pupils, is believed to be the largest of its kind. It revealed gangs, violence and county lines drug dealing is affecting schools throughout England, not only inner-city areas.

Sadly, the youth of Berkshire is undeniably exposed to these trends. Despite its reputation for comparative affluence, five areas in the county rank in the bottom 30% in the country for income deprivation, 11 areas rank in bottom 30% for education attainment, and 10 areas in the bottom 30% for crime. Of the 200,000 young people in Berkshire, many face poor life chances, with 15% of West Berkshire children living in poverty, and 3,000 young people in West Berkshire living with mental health disorders.

It is against this background that the Berkshire Youth Trust is launching a new youth centre in Newbury this autumn. The trust was formed to provide an infrastructure that supports the development of youth initiatives offered by Berkshire Youth, a charitable organisation which has delivered high-quality, efficient youth support services in Berkshire for over 80 years – helping young people make successful transitions to adulthood. The focus of the organisation is on prevention, in particular to cater for young people who are likely to miss out because they are not yet in crisis or face other barriers to access such as mental health challenges, caring responsibilities or low self-esteem and self-confidence.

Since 2011, the national youth work budget has seen its budget cut by over £500 million, with a marked shift away from prevention and towards support for those already in crisis. Furthermore, a YMCA study in 2019/20 found that there was a 97.3% drop in spending on youth services in West Berkshire. As a result, an increasing number of young people are not supported until their needs reach a crisis.

Earlier this year, Boris Johnson took personal charge of a new cabinet committee to tackle surging levels of knife crime and violence, with a particular focus on “county lines” gangs that are abusing and exploiting children. The prime minister’s stated aim is to “cut the head off the snake” of criminal gangs.

The Berkshire Youth Trust works to prevent these circumstances arising in the first place. The organisation’s first venture in its ‘inspired facilities’ plan is the Waterside Centre in Newbury. The completion of purchase of the building took place on the August 17 and the aim is to break ground to begin development of the first stage of building works at the beginning of September. 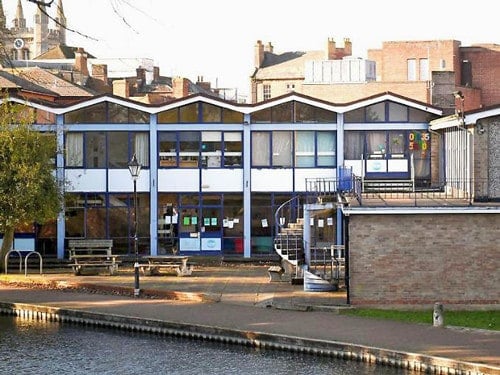 The upgrade will make the centre an out-of-school haven for young people to meet and take part in a range of activities, including rock climbing, dancing, canoeing, drama, exercise classes, music and more. The refurbished centre will also have a space for counselling and support for young people, providing a place for them to access wrap around support.

The project will require £1.5m to secure a fully operational building. Certain funds have already been raised and a further £800K is required in order to complete the development.

Cameron Smee, who works on the communications and business strategy for the future Berkshire Youth Trust, explained how the charity is seeking contributions from local businesses: “It’s often tempting for businesses to fulfil their CSR requirements by giving away to big international charities, which are perceived to allocate resources efficiently because of their scale and structure. However, by doing that you rarely see the impact on the ground in your own environment. So far we have had very few local Berkshire businesses get involved and take responsibility to help solve a problem which is apparent on their doorstep, though we’re hopeful of getting more on board by spreading the message. The effects of the pandemic on the attainment gap have made our cause even more urgent and we hope that more local people are able to get involved.”

To donate, visit gofundme.com or berkshireyouthtrust.com