It is the ultimate rags to riches story. Dr Rami Ranger, MBE, was born two months after his father was assassinated. He was forced to start life in a refugee camp in India with his mother and seven siblings. After immigrating to the UK, he set up his own business from a shed with just £2. Today, he heads up two of the UK’s fastest-growing companies, Sun Mark and Sea, Air & Land Forwarding, based in Greenford, which have a combined turnover of over £150 million. As Sun Mark celebrated an unprecedented fourth consecutive Queen’s Award for Enterprise in International Trade.

Dr Rami Ranger, MBE, is founder and chairman of Sun Mark and Sea, Air & Land Forwarding. He was born in 1947 in Punjab, India. His father, Shaheed Nanak Singh, was assassinated in March 1947 whilst trying to save students in a procession against the break-up of India. Ranger graduated with a BA degree from Govt College Chandigarh, and immigrated to the UK in 1971. In 1987 he founded shipping company Sea, Air & Land Forwarding and in 1995 founded Sun Mark, which exports British supermarket products to over 100 countries worldwide. Sea, Air & Land Forwarding received The Queen’s Award for Export in 1999, and Sun Mark won The Queen’s Award for Enterprise in 2009, 2010, 2011 and 2012. Sun Mark was ranked 25th in The Sunday Times Profit Track 100 2012, up from 33 in 2011. Ranger was ranked 785th in The Sunday Times Rich List 2012, his wealth rising from £55m in 2011 to £95m. Ranger is chairman, founder or patron of numerous organisations, including chairman of the Pakistan, India & UK Friendship Forum, chairman of the British Sikh Association and a patron of The Princes Trust. He was awarded an honorary doctorate by Preston University, US, for his contribution to business and in 2005 received an MBE for his services to British business and the Asian community. 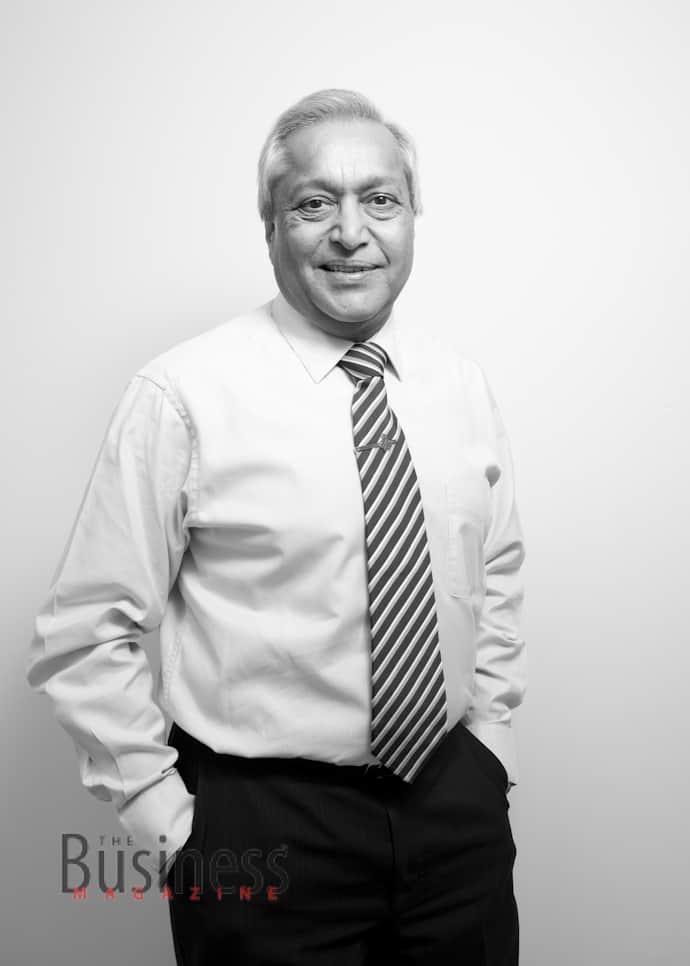 Let’s go right back to the start of your journey – how did you get to where you are today?

Life brings opportunities and you have to seize them. We were a very affluent family before my father was assassinated and we were reduced to nothing. My mother told me stories about the refugee camp. It was a horrible place but she was tough and educated and accepted the challenge of life and I am alive to tell the story. I came to the UK in 1971 to study law, however that same year the law changed and all foreign students needed to be in the UK three years before they could qualify for a grant, so I took a job in KFC, on a salary of 35p per hour. I worked very hard and they really liked my attitude. In three months I became an assistant manager, in a year I became a manager, and in two years I became a district manager. I then ran a sub post office/newsagents shop but it became very dangerous work as there were robberies and we had a little child, so I gave up my business and went to work at Dixons as a store manager. I saw that there was a guy who was making a lot of money shipping electrical goods. People coming to the UK were buying electrical goods and wanted someone to ship them back to their home countries. I thought “I can do that”, and I’m glad I did. You have to take risks in life. I left Dixons and started my own company from nothing; from a shed, with £2 capital. Somebody gave me a desk and a £40 typewriter. I collected goods from various electrical shops and began my freight forwarding business. I was very particular with the packing – I wrapped goods in shrink wrap to protect them from damage, unlike others. It cost me just 10p worth of shrink wrap but brought me very big benefits. Customers recommended me to their family and friends and the business just snowballed.

Can you tell me about the growth and success of your business from there?

The opportunities kept coming and I had to seize them. I was asked to collect grocery items from big supermarkets by my customers for onward shipping to them. There was a lot of demand for British supermarket products all over the world, so I began collecting those and consolidating them into sea containers for various companies. Then, I approached many British companies and asked if they would allow me to market their products to developing countries. I got agency agreements with big companies including Cadbury’s, Unilever and Heinz, and I started marketing their products, and again the business snowballed. Making the products available easily and quickly was the name of the game. And from there I got an idea – as well as marketing these iconic brands, I also started developing my own brands. I realised that I wouldn’t have to pay the huge costs involved with marketing, advertising, sales or distribution. As a result I could offer the same products under my label at much cheaper prices to attract a much bigger market. This formula became an instant success. Our philosophy worked, keeping the prices low, building customers’ trust, allowing them as much sampling as possible, and building brands by maintaining quality and taste. I forged strategic alliances with people in as many countries as possible to gain local knowledge and today we are marketing products in 104 countries. This is how a little company has become a global player and is still growing at over 30% a year. As a matter of fact, my business has never slowed down. I have never experienced a recession. Our motto is “we only succeed when our customers succeed”. 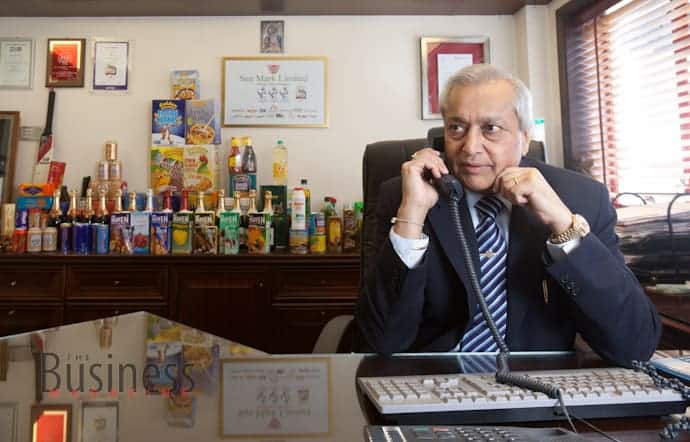 You don’t need a rich father or an elite education to be successful, what you need is self-respect, work ethics and above all, empathy for others. My mother instilled the right values in me. My wife was very important in my journey, as is my staff. I’m not an Oxford or Cambridge graduate but I’m blessed with common sense and with the help of common sense and making the most of men and material at my disposal, we have been able to achieve phenomenal success in a short period of time. Our country, Britain, is also very important. I’m very grateful to the British sense of tolerance and fair play and the opportunities that there are for people. This is a great country which is well-connected with the world. I feel that we must think global and not local.

Sun Mark was recently awarded its fourth Queen’s Award for Enterprise in International Trade – how important do you consider international trade to be?

When we were a nation of shopkeepers we managed to build an empire. We are a trading nation. Trade is our lifeline. We cannot think like little Englanders looking inward, we are a global player. Looking international is the only way forward and hidden talent is no talent. We have some wonderful products and services here and we really need to spread the word. You just need vision to get the maximum out of what is staring you in the face. We have connections with every country and enjoy more respect than any other country. I hope that our nation gets out of these difficult times and we can emerge as a very strong nation leading the world once again.

What are your plans for the future – for the business and for you personally?

The companies are still growing and if our turnover, now £150m, grows 30% more this year, that’s a huge growth. We’re building new offices, we’ll be taking on a lot more staff, we’ve opened a hub in Dubai, and the next move is to go to Miami so that we can serve the Caribbean Islands from there effectively. Now that we’ve tasted success and we like it, we’re going to keep going. For myself, the British market was a difficult one because there are big giants who have been established in this country for a long time. I, therefore, first went to all the places that they couldn’t reach, such as Africa, the Middle East and the Caribbean, and built up my business there. Now I am coming back to the UK with a vengeance. We now have the financial muscle, the know-how, the reputation and the staff to take on the UK market. We’re launching new products in the UK and then we will also go to Europe. I want to write my biography with the title “From Nothing to Everything” as when I arrived in Britain, I had nothing. Now, I have everything. Rather than complaining about the weather and the Government and the taxes, I think we should see what we can do for ourselves and our country for a change. 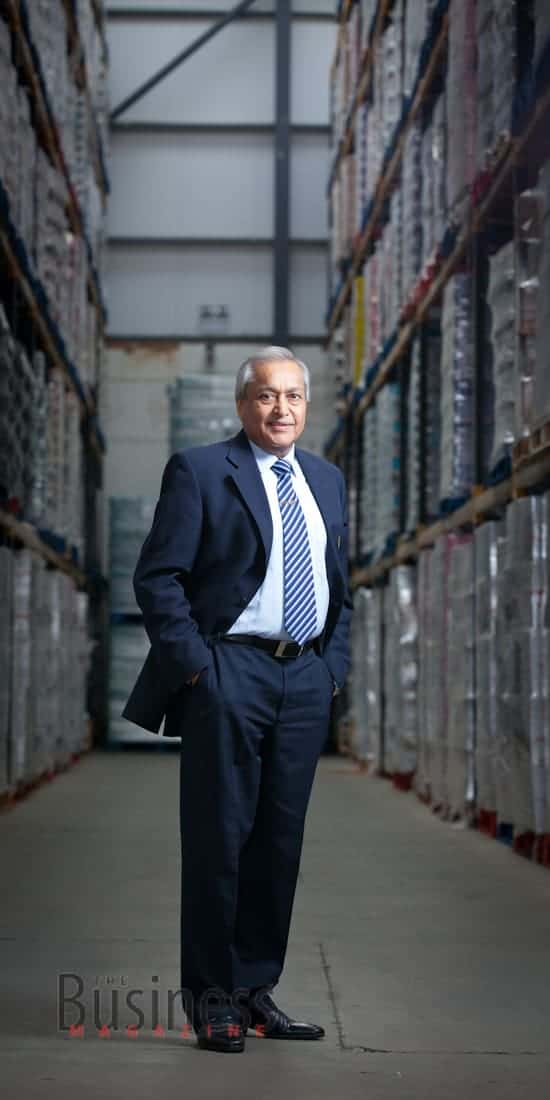 What would you consider your greatest achievement?

The recognition from Her Majesty the Queen in 1999, when we received The Queen’s Award for Export. It is very difficult for me to explain. Here I was, an ordinary man who at one time had nothing, now standing in front of Her Majesty the Queen, it was wonderful. My wife was with me, which made it even more wonderful as we started our journey together. Receiving the MBE was also a very humbling experience. What more can a man expect in one lifetime? Sometimes I feel that the greatest thing that happened to me is that I came to this country. My history could have been totally different, I shudder to think.

Do you have any unfulfilled ambitions?

Ambition is very important. An ambitious person benefits his family, his community and his country. I’ve got many ambitions; to write a book is one and I also try to put back into society from where I’ve benefited so much. I do a lot of things; I’m founder and chairman of the Pakistan, India & UK Friendship Forum to improve social cohesion. I’m chairman of the British Sikh Association, which promotes interfaith dialogue. I’m chairman of the Golden Heart Club which raises money for research into heart diseases. I’m a patron of The Princes Trust, to help our youth. It is very important that we should not leave everything to the Government as we also have a share in the prosperity and progress of our country. I keep busy and enjoy the satisfaction I gain from my success. I’d like to leave a legacy for my children so that they appreciate that their dad was not just a money-making machine! He was a little bit more than that.