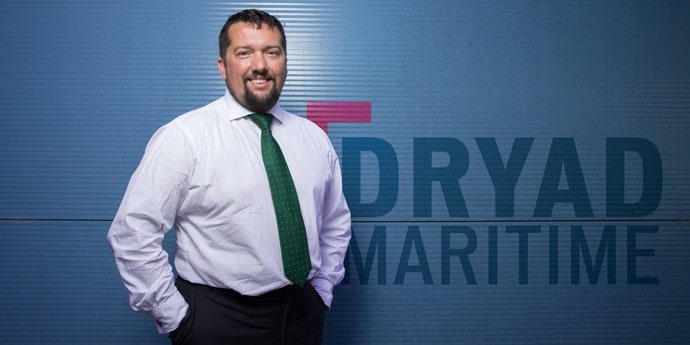 Graeme Gibbon Brooks started Dryad Maritime, a maritime operations company with a high-grade intelligence capability, in 2007 following medical discharge from the Royal Navy.  It was during his time as a principal warfare officer that he identified a need by the commercial shipping market for more sophisticated maritime intelligence than they currently had access to.  In his mind, the industry was lacking the equivalent to aviation’s air traffic control.  The maritime landscape is fraught with risks – both environmental and criminal.  Political instability also impacts heavily on the industry.  Originally providing risk-based intelligence and support to shipping companies, Dryad Maritime expanded its offering this year with day-to-day operational ’intelligence’ – a natural extension of its 24-hour risk-monitoring capability – something clients were looking for to service their need for closer performance monitoring and management of fleets to tackle increased environmental legislation due in 2015.

Gibbon Brooks’ family has strong Navy connections, something he admits was a big influence as a child and which fuelled his desire to join.  His great grandfather served on submarines during WWI and his paternal grandfather, sunk twice during WWII, was a chief stoker.  Gibbon Brooks joined the Sea Cadets at 11 as a pre-cursor to his naval career, which commenced in 1992 as a midshipman.  Progressing through the ranks, he became a navigator at 21 before qualifying as a professional diver and then later as a specialist warfare officer.  His happiest naval days were spent aboard HMS London, as a bridge watchkeeper and ship’s diving officer.  Having qualified as a clearance diver (a kind of underwater bomb disposal officer) in 2000, he became the XO (second-in-command) on HMS Ledbury, a deployment that took him to Iraq in 2003.  Having returned to qualify as a principal warfare officer (the conductor of the ships warfighting activities) in 2005, he returned to Iraq.  This time, however, events took a turn for the worse and he was repatriated on medical grounds.  Alongside his active duties, Gibbon Brooks had undertaken a study in asymmetric warfare – small vessels versus large vessels – a key feature in maritime piracy.  It was this theoretical knowledge, extensive seagoing experience, fortuitous connections and his unexpected and disappointing departure from the Royal Navy that led him to start Dryad Maritime.

How does running a company compare with running a naval operation?

In the Navy you spend a lot of time on exercise where the risks and the implications are only theoretical whereas the amount of time you spend in live operations is quite small by comparison.  When running a company you don’t have that luxury – you are live from the word go and therefore the risks and implications are apparent the whole time.  You have a duty of care for your staff that you can’t ignore.

What help has your Navy training been and what help have you had along the way?

The Navy invests heavily in personnel as you would expect and I no doubt benefited from that.  It’s an establishment that has worked for more than 200 years and its training helps you to create structure out of chaos.  During my time I worked with many captains – they taught me how to think, assess risks, analyse facts and attain a high probability of success in a situation.  These are all skills I can see have aided me in my commercial capacity.  The Navy also teaches you leadership, decision-making and how to delegate, not abdicate, responsibilities.  Start-up organisations suffer similar setbacks and I would argue we are no different, so being able to hold your nerve is a definitely a useful skill to possess.  When I started the company I was mentored by personal friends and owners of a technology company who are  advocates of ex-servicemen and they helped me develop a business plan for the concept.  They funded me for six months and it was a genuine apprenticeship for business, support I am incredibly grateful for.  We continue to have a form of mentoring through the appointment of a non-executive chairman, who helps guide us through unfamiliar territories as the company continues to grow and operate in new markets.

What is the most important thing you have learned in business?

When I first left the Navy and spoke to a friend who was running a successful business, his advice to me at the time was: “Cash is king and trust no-one.“  From my experience to date, I would argue that he is partly correct.  Cash is king, but it embodies something bigger than simply your bank balance.  It’s more about being able to believe what’s in front of you and not being blindsided by opportunities that look fantastic but yield nothing.  You have to focus first on achieving sales rather than polishing the operational plan, the part you enjoy and are perhaps most comfortable with, if you are to survive.  As for ’trust no-one’, I wouldn’t go as far as that, but I would urge caution.

How has your company grown?

Dryad Maritime has grown organically.  Shipping is a relationship business so word of mouth is a key generator and repeat business is key.  We put a lot of effort into customer services, the 24-hour operation being just one feature. 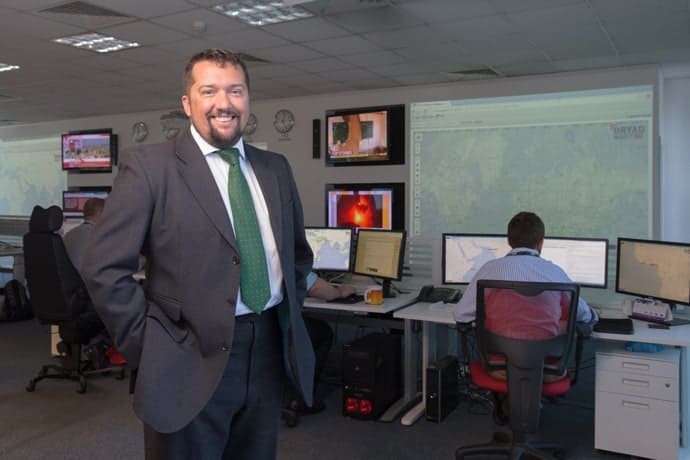 And is the media friend or foe?

We receive a great deal of press coverage due to the nature of the work that we do.  Generally the media are friendly – towards us at least.  Intelligence is considered ’sexy’ and interesting and content like that is appealing to readers and therefore editors.  However, today most piracy and maritime crime incidents go unreported because the subject was well covered by the media between 2007-2010 so now, only incidents ’out of the ordinary’ draw attention.  The lack of general media attention is a contributing factor in current thinking that piracy has dissipated and therefore no longer a concern.  This inaccurate assumption can lead to complacency in the industry and it is something we are continuously guarding our clients against.  Piracy has not been ’solved’ and a change in circumstances could easily cause it to resurrect.  It will only take one successful hijack to reverse the current situation.

Is the recruitment of former Royal Navy specialists key to your success?

Our team is primarily drawn from former Navy specialists, but not exclusively.  We firmly believe in recruiting the right people for the job and when it comes to our operations team, then those with naval experience are particularly well suited.  Our clients like the fact they can talk to people any time of the day or night that understand the environment they are operating in.  Our ops team, however, is supported across the organisation by those who have not served in the Navy and we consider them equally important to our success.

Does it feel like you are still working in a military organisation?

Unquestionably the work ethos from the Navy is extant as is the banter.  We are very process-orientated too which is another Naval trait and something we have used to our advantage by recently achieving ISO: 9001 accreditation.  Generally though, our staff have left the Navy because they wanted to so they don’t necessarily want to work in the same sort of environment.  We are mindful of this and try to keep a good balance between Navy and corporate – we think it works.

How do you see technology helping you in your business?

We use technology in-house to assist us in streamlining our processes and enable scalability, but essentially, we are a managed service provider.

Internally, we have developed a bespoke intelligence handling system, called MoneyPenny, which is a geo-spatial monitoring system.  It shows where our clients’ vessels are, piracy incidents, suspicious approaches, meteorological and oceanographic data.  This software is in continual development and will soon form the basis for much of our operational production process.

What will you do next?

We have a software development site in Hastings where our geospatial handling system was built.  As well as developing this system further for our in-house use, we are looking at ways in which this technology can be adopted by third parties.

Outside of the UK, we have seen expansion in to Asia with a new office in Singapore and representation in the Americas.  We are hoping to expand on this with more operational staff in these regions and further expansion in Europe.

What did you think of the film Captain Phillips?

I sat and thought about the film for a long time after seeing it and decided it is as true to a real-life situation as you will get without being on board a ship.  That is what modern-day piracy looks like.

You’ve seen a lot of the world, albeit not on vacation, so what do you enjoy in leisure time?

Time with family and friends is very important to me – something the Navy gives you is a great friendship network which I am keen to nurture.  Living on the south coast and with salt in my veins, getting out on the water is also crucial.  We have a boat we use for research and development, so quite often you’ll find me tinkering on that at the weekends.