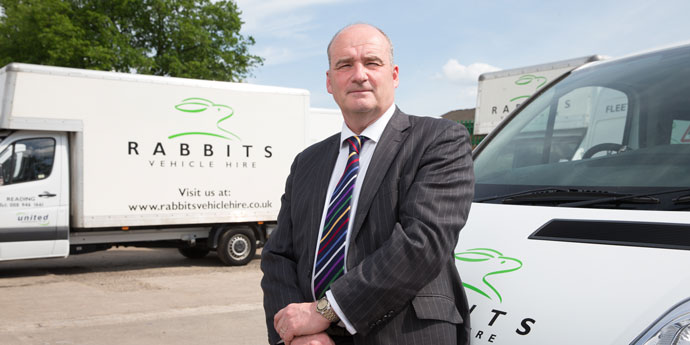 A few months ago, Hollywood heartthrob Orlando Bloom caused a stir on a suburban street in the heart of Reading, when he paid a visit to Rabbits Vehicle Hire. According to managing director Kevin Rapson, the local 'yummy mummies' were flinging pushchairs and toddlers aside to catch a glimpse of the film star. It was all in a day’s work though for Rapson and his team, who number famous actors, music stars and a host of sportsmen and top-flight footballers among their clientele. Celebrating its 25th anniversary this year, the business has grown from just eight vehicles in 1989 to 300 in 2014. It covers an area across a 30-mile radius of Reading (although they often go further to satisfy customer requirements – namely Leeds, Newport and Bradford in recent weeks) and has an office in Didcot, plus a turnover in the region of £2.25 million.

A child of the Sixties, 53-year-old Rapson was born and brought up in Caversham, leaving Stoneham Grammar School at just 16 with a clutch of CSEs and O Levels and a burning ambition to join the Army. Having been accepted, three weeks before he was due to join, a love affair intervened and he returned to civvy street, a decision that he still regrets to this day. A series of jobs followed, including trainee supermarket manager and highway technician, before joining PartCo then Cafco Autoparts selling car parts to garages across Reading. It was clearly his first step on the road to success because he built the branch to a £1m turnover and won Business Manager of the Year Thames Valley in 1987. Part of the prize was a course at Henley Management College and Rapson progressed rapidly up the ranks to regional manager, in charge of branches across the south of England. By his late 20s though, he was looking for a new challenge and, in partnership with Graham Dore, then deputy MD at Cafco, spotted an opportunity to move into the car rental market and Rabbits Vehicle Hire was born. A season ticket holder at Chelsea Football Club, Rapson is married to Jayne and has a son George, 19, and a daughter, Amy, 13.

Was it an ambition to run your own business?

Yes, I always knew I wanted to be my own boss. Before I got together with Graham I was looking around for something to do. I even went to the British Franchise Association show to look at ideas.

We have to ask, where did the name Rabbits come from?

From the age of about 14, it was always my nickname at school. We looked at various names but the obvious ones were gone, Graham encouraged me, he said everyone called me Rabbit and I was well known in the area. Together we had the operational, financial, management, and selling skills to make the business work, so we set it up 50/50. It was hard at first, no-one took us seriously because of the name.

Did you fund the business yourselves?

We had the money we needed for the initial eight vehicles and running costs for six months, so we didn’t have to borrow anything but we did, and always have had, great support from NatWest who we still bank with today. Graham always taught me that if you keep the bank in the loop and tell them what you are doing then, even if you make a mistake, they will be OK with you.

What have been some of the biggest changes in the rental market?

These days we have 200 vans, 50 specialist vehicles (people carriers, 4x4s, tippers, caged tippers etc) and 50 cars of all shapes and sizes. When we first started, there was nothing like air conditioning or electric windows, but of course, they all have that now, even the vans, which are becoming as comfortable to drive as the cars. The new Nissan Qashqai even beeps at you if you start to venture over the white lines in the middle of the road. Most of the manufacturers have very reliable and good vehicles these days. 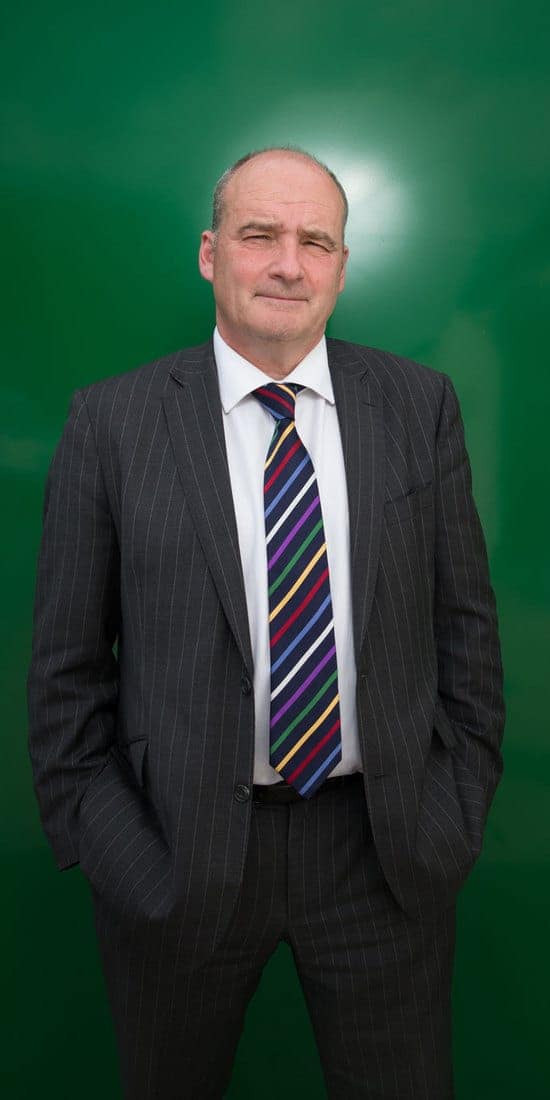 What has been the secret of your success?

Building a great team of people. You have to be passionate about the business, I keep a notebook by the bed so if I think about something late at night, I can write it down and I’ll be here at weekends, making it happen. The average length of service for employees is 10 years, so we have great continuity and dedication to the company.

Are you still very hands-on?

Yes, probably too much so. When you have set something up from nothing, it is part of your life and you can’t let go.

Is the future bright for car hire?

Being in the centre of Reading, it’s a very exciting time because of projects like Crossrail and the station redevelopment. We are within walking distance of the station and that’s a huge advantage. We have a great number of clients in the Greater London area. We find our customers are very loyal, some 80% of it is corporate work; they know they can rely on us to give them a good service and to find the right vehicle for them. Graham has now retired, but his son Steve, who’s my godson, works in the business. He’s learned a lot over the past three years which is very good. The intention is that one day he will take over which will continue the Rapson-Dore partnership.

As a businessman though, I do have one concern and that’s how, as we come out of the recession, the average man in the street will cope when interest rates rise and their disposable income drops. I think we’ll see a lot of people affected and have to take measures such as cutting back on holidays or meals out and gym membership.

I’d describe myself as a generalist, so whatever issues arise, whether it’s to do with staff, customers or vehicles, I will be involved. I often deliver vehicles myself or take one out for testing because I enjoy it. I’ve always been lucky to have a good admin person and a good team behind me though.

What’s the best piece of advice you would give?

You have to have commitment and believe in what you are going to do. Business always takes precedence; it is your baby and you have to put it first. You can’t approach it half-heartedly and still want to become a millionaire. I’m always fighting for precious time.

Do you have any heroes?

I admire people who have their own business, they always seem to have a good social standing. Years ago when the pub was the centre of the community, it was the publican who was at the heart of it and that’s fascinated me. I was curious, I wanted to know how people had got started in business. On a non-business front, Rod Stewart and Winston Churchill are my heroes. 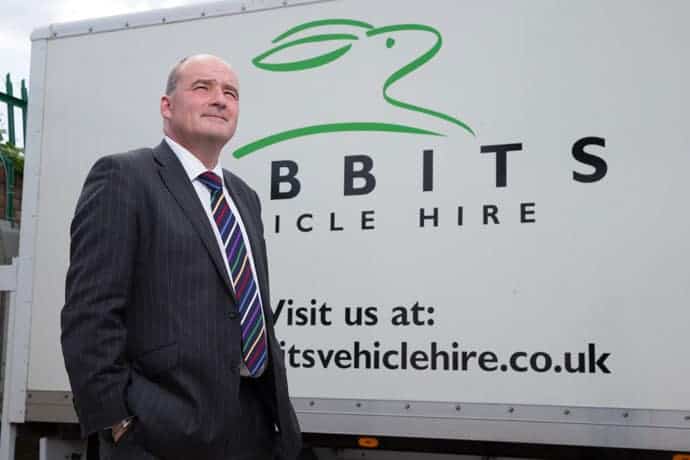 It would have to be still being in business after 25 years. It’s a very competitive and demanding industry, we’ve always gone out and got the business in, and that’s down to the team I have around me.

I’m really proud when I am out and see a Rabbits vehicle with our logo on the side. I still get a kick out of it.

I also enjoy “giving back” to the community. We’ve always been good at supporting different charities and Graham was president of Reading Lions Club, so we have been heavily involved with them. In 2015, I want to move to adopting one charity for a year at a time so we can achieve great things with them, rather than lots of smaller donations.

As a company, we have been very supportive of Reading Football Club over the past 25 years and supply the club with vehicles to help move their kit around.

Do you ever take any time off?

With so many places to visit, I make a rule never to go anywhere twice. I travel around Europe quite a bit following Chelsea and this October I’m off to New York for the first time, which has been on my ‘to do’ list. I’m looking forward to that.

Given the chance, what would have been an alternative career?

Apart from the military, I would love to have been a landscape gardener. I did a home-based course on horticulture in the evenings and I love gardening. I have a mini orchard with about 30 different varieties of fruit. This year I’m growing 200 sunflowers in the garden, so I’m waiting to see what that will look like.

And finally…you’re surrounded by cars all day, what’s your dream drive?

I actually live less than two miles from the office, so I tend to walk or cycle! If I had to name a favourite, I’d say a Mercedes E-Class or a Jaguar XKR but the truth is because I rent cars out as a living, I never get too attached to them.