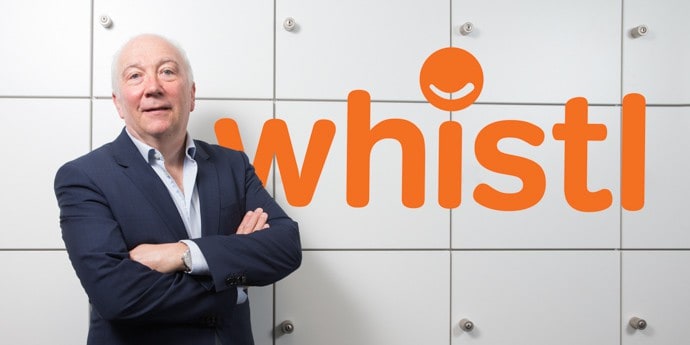 Competing with a giant like the Royal Mail is not a task to be taken lightly, yet Nick Wells, chief executive of Whistl UK, is clearly a man with a mission.  He has seen the company he joined in 1984 evolve into Royal Mail’s biggest competitor through two of his own MBOs. The latest of which was winner of the Thames Valley Deal of the Year Award (see page 40).  Now boasting revenues of over £600 million, the company processes some 4 billion items of addressed mail a year – over a quarter of the mail within the UK – and works for big names including Sky and Barclays.  Between its Marlow HQ and seven hubs nationwide, it employs a core full-time staff of 1,600 people, plus part-timers, and also offers a trackable packets and parcels service, international delivery and doordrop media campaigns.

As the youngest of five children, Wells grew up in Northamptonshire, attending Wellingborough School and the University of Warwick, graduating in 1980 with a degree in sociology, together with business options.  He moved to Berkshire to take up a role with Circular Distributors in 1984, going on to lead his first MBO and becoming managing director within a decade.  He sold the business to TNT/Dutch Post Office (now Post NL) in 2001, but was asked to stay on to lead the newly-named TNT Post through the heady days of the liberalisation of the UK postal market.  In 2014, the business was renamed Whistl and Wells has grown the company into the second largest private postal business in the UK, completing a second MBO in late 2015.  Wells is married with three children in their twenties. 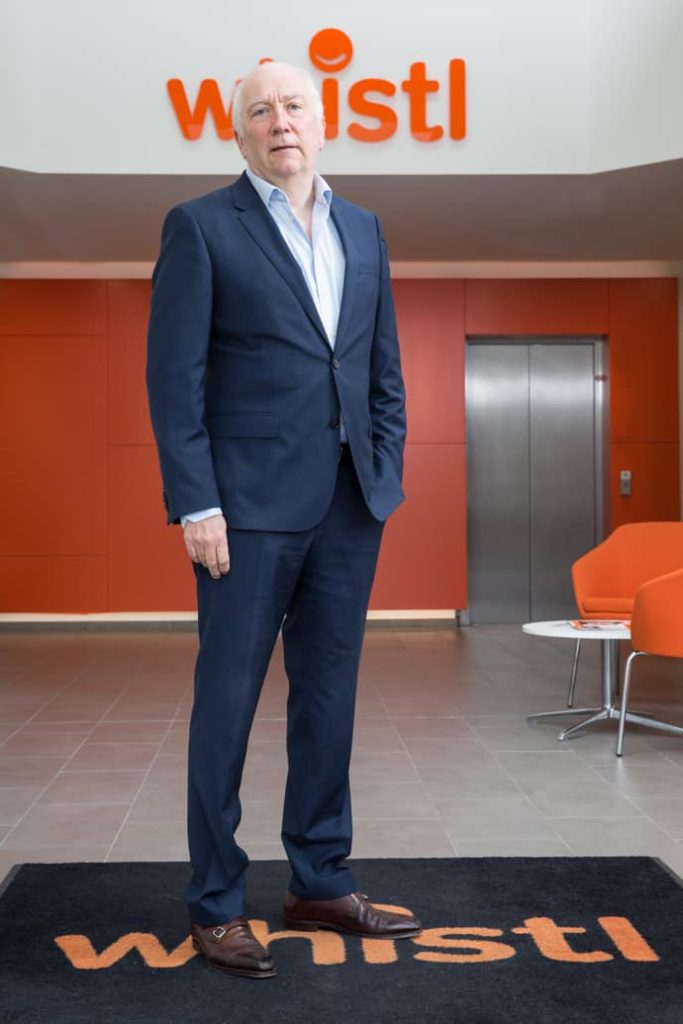 After leaving university, I worked for a marketing services and fulfilment company in Leicester for four years.

I spotted an advert in Campaign magazine for Circular Distributors, a direct marketing company, and when I met the managing director, Peter Morgan, he offered me a job.  The sector was enjoying good growth, new targeting systems were coming in and it was an exciting time.  I started off in account management, was promoted to sales and marketing director, and then in 1990, together with a couple of colleagues, I led a management buyout from the advertising agency that owned the business, and a few years later became MD.

The MBO was certainly a big decision, we had to put the house on the line and borrow the money, but we made the business very successful.

You then sold out?

Yes, in the early 2000s postal markets across Europe were being liberalised and when I sold the business to TNT, they asked me to stay on and take the lead, which was quite unusual.  In 2004, we signed a landmark access agreement with Royal Mail, which meant we had the ability to handle areas such as account handling, billing, collection, sorting and trunking, while the Royal Mail still managed the final mile delivery.

Was there one moment that stands out?

After we launched we had two or three big wins that put us on the map.  We gained Sky and Express Gifts, then a mobile company, and then Barclays – once you have that type of credibility you really start to gain momentum.

What were some of the challenges?

We had been looking at the end-to-end delivery market – the actual delivery of items to customers – and in 2012, we’d conducted some successful pilots in cities such as Manchester and Liverpool.  However, faced with what we felt was anti-competitive behaviour from the Royal Mail, we took the decision that the risk profile was just too much and it was better to refocus on our core business.

Is that what triggered the second MBO?

Because of what happened, we had the opportunity to review the ownership structure and last October I successfully completed the MBO, owning 82.5% of the business with PostNL retaining the remaining shareholding.

I think of it as going from entrepreneur to “corporate slave” and back again.

Wasn’t taking on Royal Mail rather like David v Goliath?

Not really. Because they still do the final mile delivery, we are Royal Mail’s biggest customer but we are also their biggest competitor.  Day-to-day we have a good working relationship and we both benefit – I call it co-opertition.

Where does that entrepreneurial spirit come from?

Business was always in our family.  My father was a journalist who then went into advertising at EMAP, and my mother ran a couple of toy shops.  From the age of about five, I knew all the product lines and all the prices, I think I must have been rather a precocious child but it certainly gave me a flavour for business.  We were a hard-working family and I knew that was what paid for us to be privately educated.

I’ve always been opportunity driven.  You can make plans for your business but in terms of your own private situation – and certainly with regards to ownership of the business – you can’t necessarily plan it all out.

We had the opportunity to do this latest MBO and everything was right for it.  Now I think we have a business which is more fleet of foot, we have a highly motivated management team which works hard to deliver success.

My family roots certainly gave me a work ethic and taught me how to succeed.

Circular Distributors’ Peter Morgan was a real inspiration to me at a fairly young age.  He was great with people and taught me that part of the success in business is making sure you get everybody aligned and working towards a common goal and strategy.  If you can do that and you have a motivated team, then you will deliver some good results.

Do you have any golden rules? 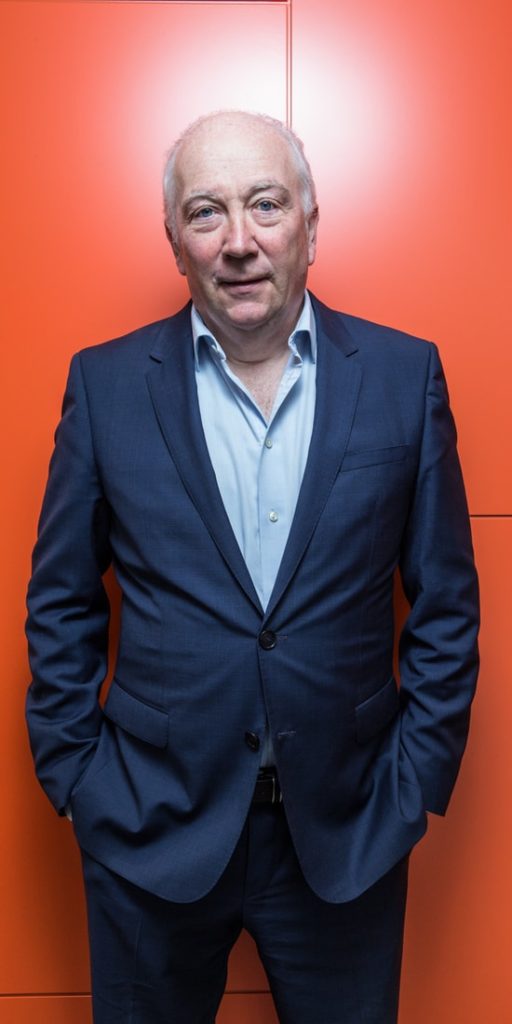 There is some decline in the mail market, but we’re seeing good growth in direct mail and a lot of growth in packets and parcels, which we’re very well positioned to handle thanks to our own growth strategy.

What are your future goals?

To make sure we deliver sustainable, profitable growth within the Whistl UK business.  It’s a high turnover, low margin business, but interestingly, you have to deliver great quality of distribution and good service – at the same time as being the lowest cost operator.

Those are two things that don’t always go together.

Customers expect great service, because if their bills don’t go out on time, they don’t get paid and if a direct mail campaign isn’t delivered, then they don’t get the response they expect.

We have to deliver high levels of urgency and efficiency as cost effectively as possible and we are well positioned to do that.  We have 56% of the downstream access market which means we have the size and scale to be able to do the job effectively.

Tell us something we don’t know about you

I’m also chairman of Lifecycle Marketing in Bourne End, which publishes the very popular mother and baby magazine and website Emma’s Diary, on behalf of the Royal College of General Practitioners.  I launched it 23 years ago, when my wife was a midwife and health visitor and she used to say there wasn’t enough information to give out to pregnant mums.

In my spare time I like to travel and recently had a stunning trip to Namibia with my wife and three grown-up children.  I enjoy cycling and last year raised funds for the Anthony Nolan charity, which is a very good cause, by doing the London to Paris cycle ride.  I’m also a keen skier, play golf and enjoy wine and spending time with the family.