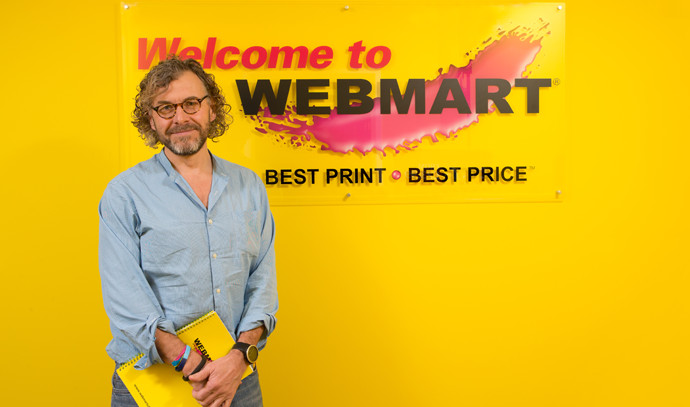 A passion for business and a rage against social injustice form the backbone of Simon Biltcliffe’s success. As founder of print services specialist Webmart, he has blended capitalism and Marxism to create a £30 million turnover business and, true to his upbringing, he ensures the profit is shared among his team and further afield via The Webmart Charitable Trust. A combination of innovator and history buff, his quirky approach is never more evident than in the wood-panelled 'boardroom' complete with faux fire and portraits of famous explorers – each with their faces replaced by management team members. It clearly works, as along the way both Biltcliffe and the business have garnered a raft of titles and awards, including IoD Director of the Year 2010 and Future Champion in the 2013 National Business Awards. With global ambitions and an Ironman to train for in his 'spare time', he is a man in a hurry. Alison Dewar went along to meet him.

Now 48, Biltcliffe’s early years were spent in Barnsley, South Yorkshire, where many of his peers were destined for a life in the pits until what he calls the “systematic disembowelling” of the mining industry by the Thatcher government. Blessed with a father in education and an inherited love of books, he knew there had to be a better way of “beating the system” and won a place at Newcastle University, where he gained a degree in agriculture and economics. With a bleak horizon on the local jobs front, he headed south and joined the print industry, a role that was to set him on the path to future fortune. Married with two daughters, he is still passionate about Barnsley and last year took on a voluntary role with Barnsley Economic Partnership, with the aim of attracting new businesses and bringing economic growth to the region.

Where did your career start?

I fell into a job in the print industry working in sales, it was dynamic, fast moving and I really enjoyed it. In 1993 my work took me to Japan and I saw the equivalent of a Kindle, it was the first time I’d seen electronic content. We had some major clients and a multi-million pound turnover and when I came back I had great ideas for starting a new media division. It was such a fantastic opportunity, but after a year they decided they didn’t want to go down that route, so I left and started Webmart with the aim of doing things differently. The money was still in print, but it was about using new technology to do things differently, understanding the power of being able to leverage data to gain efficiencies.

Tell us about Webmart

We consult, buy, manage, print and deliver all types of printed products for customers both in the UK and overseas. We have the biggest database of print specifications and prices and believe we know more about the print marketplace than anyone else in the world. It allows us to offer a better solution to whatever the customer wants and by whatever technology they want to use. In the same way that the Clubcard changed the way Tesco operates, we have changed the print industry from “dumb print” to “smart print”. The West might see print as a legacy media, but in China the magazine market is doubling every three years as living standards go up, the global market for print is £800 billion and it’s growing all the time. We’re very proud in that we’ve never borrowed money, we self-invest and we expect to continue to grow significantly, especially in overseas markets, which is something we’re working on now. 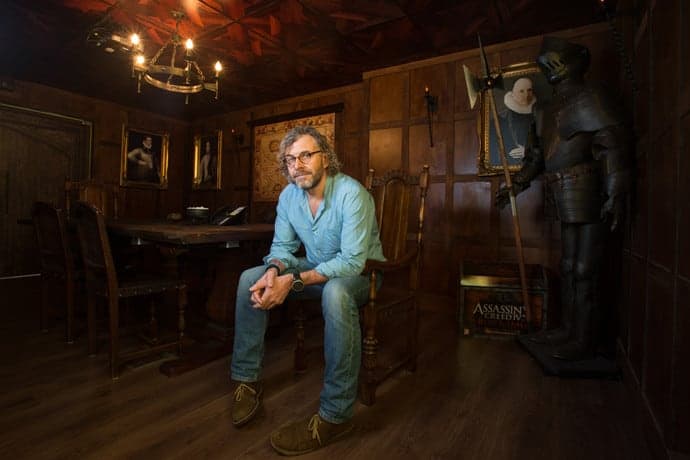 Have you ever been afraid of failure?

If you want a sustainable competitive advantage you have to stay away from convention, be counter intuitive and different. Having no external investors allows us to do that, we can do stupid things – as long as it’s for the right reasons. If something fails, then we try something else and every time we are successful then that increases the distance between us and our rivals.

Always be honest and straight with people, always be true to yourself and always look after people.

Tell us how you put that last point into practice

I think the key role of business should be to create and disseminate wealth, before the government gets hold of it. Marx said in an ideal world, surplus value should go back to the people who created it. If you blend a world class capitalist business with world class Marxist views, then I believe you have the best of both worlds, which is what I try to achieve and that includes looking after my team.

We employ 45 people across our three offices in Bicester, Barnsley and East Kilbride and I think you have to be able to offer three things:

If you can get the alignment perfect on those three things then you take any friction out and won’t have a problem. It also means you are bound to attract the right people, develop their skills and reward them properly.

It’s the same with customers and suppliers, work with them as one, find the most efficient way of working. You usually find the good people come to the top, it’s about mutual respect. The highest form of business relationship is trust. 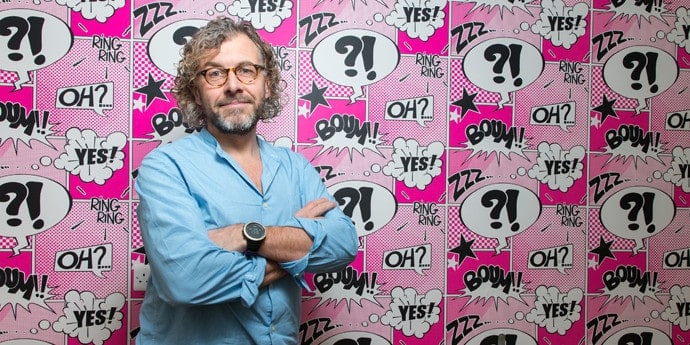 You also encourage your team to fundraise for charity

Yes, we have the Webmart Charitable Trust, which is partially funded by our profit share scheme, and we also do a lot of sponsored activities. So far, we’ve given over £250,000 to charities, which is great.

You have an impressive list of awards, how do they sit with you?

Winning awards not only validates your own approach, it gives you a new cohort of people to talk to. Once you have peer recognition a staggering amount of people will take you into their confidence, share information and be willing to listen to you.

Are you still very hands on?

I’ve always been involved in strategy and consulting, but I’m effectively taking a bit of a semi-sabbatical right now. We’re structuring Webmart into teams to drive the business forward and grow to the next stage, so I’m spending time looking at management models and doing some research, talking to people outside our “eco-system”. Paul Seaborn, our deputy MD, is leading the change and I’m supporting him and the management team. April 1 will be our new financial year and that’s when it all happens.

What will you do next?

I’m working on a new software business with Paul, which is very exciting. Right now though, I’m training two or three hours a day for an Ironman contest in Mexico on March 30 – I’ve been training throughout the winter and needed some sunlight.

Will the Ironman be a first?

Yes, although I did a half Ironman in October and I’ve done other things like climbing the highest mountain in Antarctica and running the ice marathon in Siberia. I generally do one daft thing a year, so this will be it and it will be for charity. Afterwards my brother and I are taking two Harley Davidsons to California for 10 days, so that will be fun.

Are you a keep-fit fan?

I believe if you have a healthy body then you generally have a fully operational brain and you’re more capable of better ideas for a longer period of time and able to do a better job. We have a gym here and I try to encourage everyone to have a healthy lifestyle. 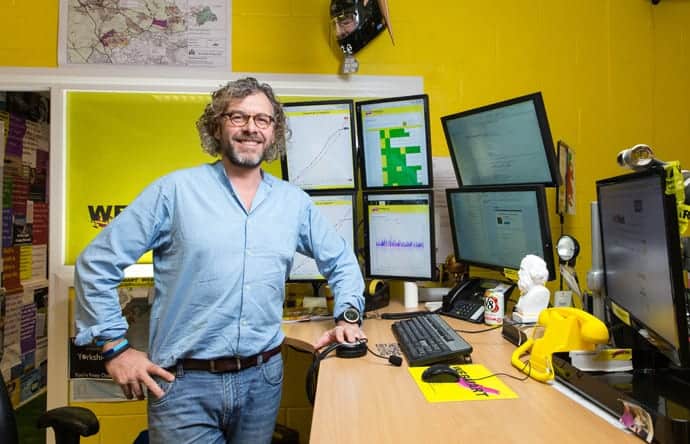 You are on the Advisory Board for the School of Technology at Oxford Brookes University and also involved in the Barnsley Economic Partnership. What do you get out of 'giving back'?

I think generally, universities don’t engage well with the business community, so I work with Oxford Brookes as much as I can to help them understand what businesses want and it also gives me a greater understanding of what they are doing.

I’m very proud of growing up in Barnsley, it’s 30 years since I left and it’s still a very deprived area with unemployment of 40,000. I was given the opportunity to work with the council as a business ambassador and I provide support and mentoring to try and help improve the quality of life for people there. People shouldn’t have to leave the area to make money, Barnsley has a great workforce available at a fraction of the cost of other parts of the country and we need to attract inward investment and development.

Webmart has an office there and I love going back. There are a lot of opportunities to improve. We’re looking forward to the Tour de France going through in July and ASOS is developing a new operation there, so things are happening, which is very exciting.

And finally…you’re clearly a history fan and have even become a non-executive director of History Today magazine. Tell us more.

The publishers are a client of ours, they know I am interested in history, so I took up their offer. Historical figures have always resonated with me much more than contemporary ones, most of whom I think are very transient, with the exception of people like Sam Walton (Walmart founder), who didn’t let success go to his head, and Warren Buffett, who I believe has a simple view on life.

There have been some fantastic leaders through history, names like Rayleigh and Frobisher. People think history is dead but they’re missing a trick – it gives us such a different perspective; it tells you why we look at the world the way we do. For example, we think 3D printing is new, yet the ancient Egyptians created a similar technique, and we can learn so much.