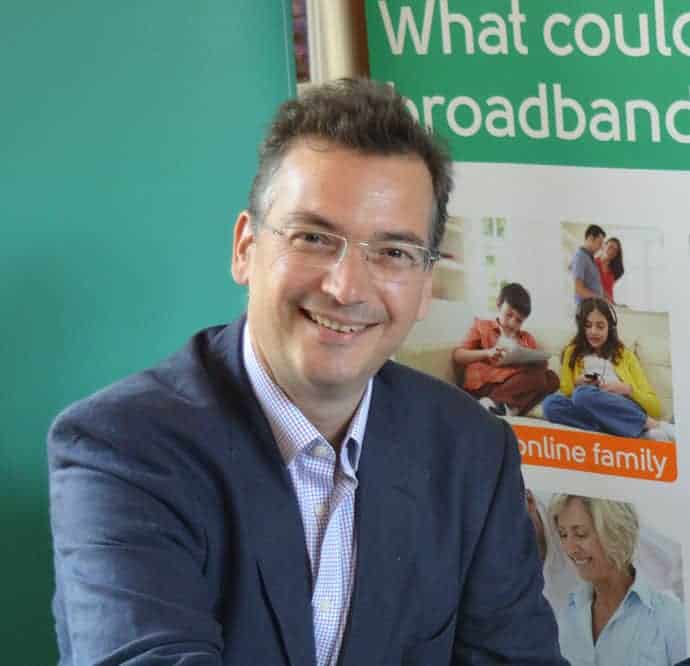 Gigaclear specialises in providing ultrafast fibre broadband with speeds of up to 1000Mbps for both homes and businesses, and founder and chief executive is Oxfordshire businessman Matthew Hare.

He believes good Internet access should not be about how close you are to an exchange, but rather on what you are prepared to pay.

“How good your Internet service is should be based on how important it is to you and how much you will pay for the service you want,” he said.  “We say, if you want 1000 Mbps then that is what we should sell you.

“It’s a bit like buying a car - no-one needs a Ferrari, but there are plenty of people who are happy to pay for one.

“Communications technology is there to save time and the faster it is, the more time you save and that’s time you can never get back.”

His faith has been well rewarded. So far Gigaclear has installed fibre outside more than 15,000 properties in rural parts of Oxfordshire, Berkshire, Northamptonshire, Essex and Gloucestershire, with 10,000 more already in construction.

Further growth plans received a boost in January, when the business secured an £18 million loan from the European Investment Bank, the largest of its kind awarded to a UK company, enabling expansion to at least 40,000 additional properties during 2016.

Matthew Hare launched Gigaclear in 2010, investing the proceeds of the sale of his former business Community Internet Group (CIG), into the new venture.

His technology career had been built on firm foundations, as an economics graduate he joined Racal-Millicom (later to become Vodafone), when it was at the forefront of developing mobile phone technology and network services, launching the UK’s first mobile service in 1985.

A spell with Swedish company AB Kinnevik followed, before Hare’s entrepreneurial spirit took over and he launched CIG in order to take advantage of the fledgling Internet.

“The mid-90s was the beginning of the commercialisation of the Internet so it was a very exciting time,” he said.  “The idea of starting a business in order to exploit an opportunity wasn’t a new one, but the Internet was such a new concept that it was scary.

“I’m not an engineer, I’m a salesman, but I’m very interested in technology because it offers lots of opportunities to change the way you do things, making them faster, cheaper and better, which in turn creates more opportunities to sell things to people.

“And, if you can understand why people want something and see that they are willing to pay money for it, then you can find a way to be successful and attract investment.”

It’s a philosophy which continues to work for Gigaclear, where there is no shortage of demand for its services.  Last December saw around 500 enquiries and in 2015, Gigaclear’s headcount grew from 29 to over 100 employees.

In 2014, Matthew Hare successfully raised over £2.75m via an Enterprise Investment Scheme and followed this with £5m from institutional investor CF Woodford Equity Income Fund, a figure which has since been increased.

A further £20m has come from Infracapital, the infrastructure investment arm of insurance company Prudential.

Hare says there are opportunities to grow “many, many times over” but also warns that it can take time to see results – he estimates it costs around £400,000 to build even the smallest network.

“It isn’t a quick win because it takes five years or more of operating a new network to get your money back but, after that, it will continue to make money for investors for the next 50 years,” he said.

“Not only does that make it very attractive, but you’re also solving a problem that no-one else is solving.”

Investment in funding and building new networks is based on demand and eligibility and each new rural community, once qualified, must start with a 30% sign up level to be eligible for Gigaclear.

The company prides itself on working with local communities, holding events and campaigns to talk about the work required, the technology and service.

With the exception of one or two smaller community-based operations, Gigaclear is alone in its field, and Hare says:  “If you’re on your own and no-one else is doing something, then they are either all wrong or all right.

“Part of being an entrepreneur is having the willingness to say that everyone else must be wrong.  If you believe that there is a better way then you have to follow your belief and knowing your customers absolutely love what you are doing ensures you will always find a way through.”