AEW has announced its plans for the redevelopment of Festival Place, the 1.1 million sq ft shopping centre in Basingstoke which it bought at the end of last year. The redevelopment will include improvements to St John’s Square (which have already begun), enhancing the quality and efficiency of the car park and changes in the retailer line-up over the next 12 months, which will increase footfall and "significantly improve the retail and leisure experience for the local Basingstoke and wider Hampshire audience".

Metro Bank will open on St John’s Square in December 2016, following its 25-year lease for a prominent 14,000 sq ft unit, and it is "expected to become the catalyst for the square".  Double-height shop facades will also be introduced on St John’s Square.

Russell Jewell, head of private equity funds for AEW in Europe, said: “We are looking at a number of long-term asset-management initiatives to enhance all parts of the centre. Securing a landmark letting to Next earlier this year has created real momentum and we’re in talks with several new brands interested in taking space at Festival Place. We will make further announcements in the near future.”

Next will join the existing anchors Debenhams and Marks & Spencer at Festival Place. Doubling its floor space to 48,000 sq ft Next is to become a two-level flagship store when it opens in January 2017.

Festival Place has a footfall of 20 million a year and is home to 200 shops, including SuperDry, Zara, Apple, River Island, New Look and H&M, a 10-screen Vue Cinema, and a mix of restaurants, including Las Iguanas, Pizza Express, Gourmet Burger Kitchen, Nando’s, Giraffe, Pizza Hut and wagamama. Over the past year, several of these have refitted and enhanced their restaurants, which shows strong confidence in the centre by existing brands. 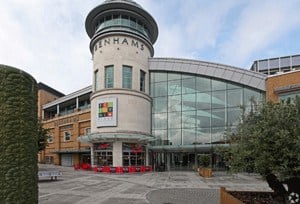 The best hotels in Surrey for business travel