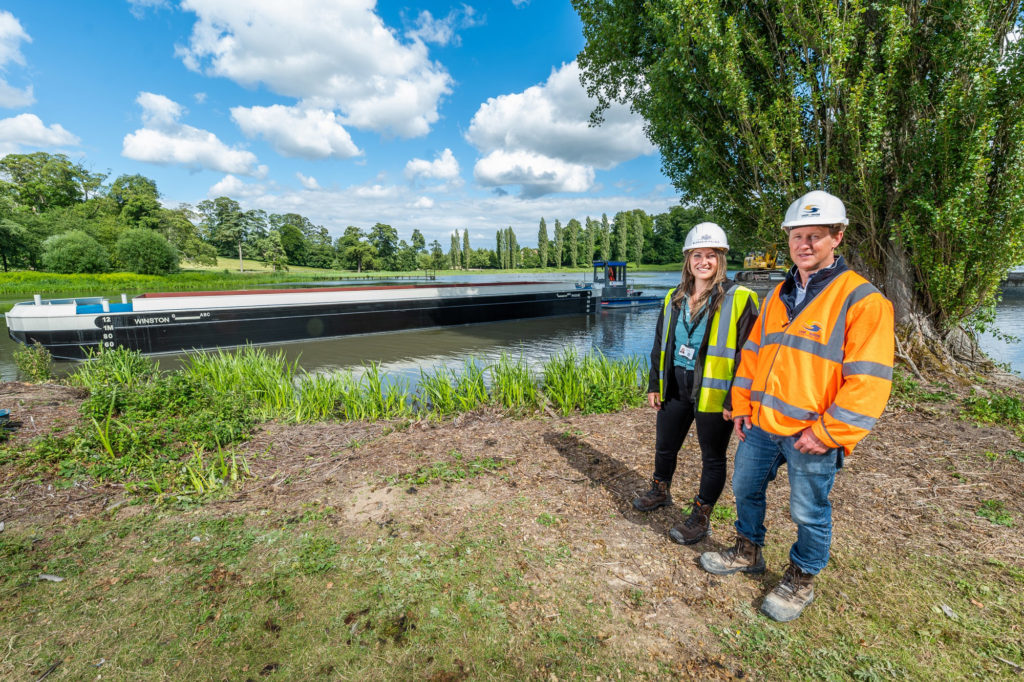 A fleet of barges has been specially built to undertake the dredging operation of the Queen Pool at Blenheim.

The dredge is one of the largest civil engineering projects ever undertaken at the Oxfordshire UNESCO World Heritage Site.

Wet civil engineering contractor Land & Water will remove 300,000 cubic metres of silt, enough to fill Wembley Stadium, and return the ‘Capability’ Brown-designed lake to its original depth of two metres from its current shallows of 30cm.

Blenheim Estate Director Roy Cox commented: “The dredge is one of the most ambitious civil engineering projects undertaken here at Blenheim over the last 300 years.

“It is vitally important to help ensure the long-term health of the lakes, surrounding waterways and parkland and the rich biodiversity that it supports as well as mitigating the risk of environmental damage due to climate change”.

The six new ‘Olympic Class’ hoppers have been designed by experts at Land & Water Plant, assisted by naval architects from Keel Marine.  The 20-metre-long steel vessels can each hold up to 80 tons of material.

Material that has built up at the bottom of the lake over many years will be dug out, carefully so as not to disturb the actual lake bed, and placed in the waiting hoppers.

Once full they will be pushed to a temporary wharf that has been constructed at the side of the lake before the silt is unloaded into dumper trucks and used to create a new area of grassland on the estate.

Kevin Kirkland, Managing Director at Land & Water says, “It is great to be back at Blenheim following the restoration works at the Grand Cascade and continuing to safeguard the future, and protect the history, of this prestigious site and its landscapes.

“Land & Water are proud to be working on this project, believed to be the largest inland dredging project, we have utilised our expertise to deliver an overall solution that we truly believe is offering Blenheim and its visitors the best possible value.

“We will be using HVO fuel throughout the project, which is up to 90+% net carbon neutral which will mean we are significantly reducing the environmental impact of our works”

Queen Pool is the upper lake at Blenheim and was created by ‘Capability’ Brown around 1763 as part of his extensive re-landscaping of the park and gardens.  The man-made lake gets its name from a 14th century fish pool that was known to be a favourite place of Queen Philippa, wife of Edward III.

Blenheim launched a competition earlier this year to officially name each of the hoppers. The winning entries are: Clementine, Winston, Swan, Mallard, Fair Rosamund and Reg who Likes to Dredge.

Featured image: Kelly Whitton, Head of Built Heritage at Blenheim, and Charlie Oakes, Project Manager from Land & Water, with one of the new hoppers.