The purpose-built Fareham Innovation Centre at Daedalus is now fully occupied, 12 months after being launched. It is run by innovation-centres operator Oxford Innovation on behalf of owner Fareham Borough Council, and provides occupiers with advice and support to help them start and grow their businesses.

Oxford Innovation looks after 20 centres which specialise in running facilities which combine office space and mentoring support for start-up and early-stage firms. Stephen Brownlie, its regional manager for the south, said: "The demand for the 24 offices and 15 workshops at Fareham Innovation Centre has been phenomenal – we are two years ahead of schedule by way of occupancy levels. There is a strong case for additional, similar business space to be built in the vicinity because demand from incubator and growing business is so strong."

Andy Wannell, director of finance and resources at Fareham Borough Council, said: “This is a fantastic milestone for the Innovation Centre, and its operator Oxford Innovation, just a year after it opened. The vision for the Innovation Centre was that it would be a thriving business hub for growth and networking and that is exactly what it has become.  It’s great to see so many locally based businesses making use of the excellent facilities and support on offer at there - long may it continue.”

There are now 27 businesses at the award-winning £5.3 million centre. Many are from the marine, aviation, aerospace and engineering ectors, with a further 36 local businesses regularly using the drop-in facilities, including hired conference and meeting rooms. There are 110 businessmen and women on site.

One of the latest businesses to take root is MRO Insyte, which specialises in the maintenance, repair and improvement of operations environments across the world. The firm, run and owned by Peter Eales, has just been awarded a contract by the Saudi Arabia Ministry of Commerce and Industry to visit manufacturing plants and benchmark inventory efficiencies and international standards for the Kingdom.

Eales said: “The innovation centre is helping me to grow my business by freeing me up to focus on what I do best. It is in a fantastic location and gives me all the tools I need to grow as a business. Working around other businesses allows me to network and acquire new and creative ideas to develop MRO Insyte."

Brownlie added: “With 110 people based here, the opportunity for business support and networking with other companies is superb. For example, MRO Insyte commissioned another occupier, LR Animation Studios, to produce a video as a visual sales tool."

Occupiers at Fareham Innovation Centre enjoy various benefits, including a 100% business rate discount worth up to £275,000 per business over a five-year period for being within an enterprise zone.

Thanks to the achievements to date, the centre received plaudits from the Federation of Small Businesses (FSB). It was awarded the accolade of Most Innovative Small Business Friendly, Programme, Campaign or Project at the 2015 FBS Awards.

The centre is across the road from the recently-launched £12m CEMAST Centre. CEMAST – the Centre of Excellence in Engineering and Manufacturing Advanced Skills Training – is the main learning centre for more than 900 students in apprenticeship programmes with partner companies such as BAE Systems, GE Aviation, Virgin Atlantic, Coopervision, Burgess Marine and Jensen Motorsport.

Having hit its three-year enrolment target students after just one year, CEMAST is regarded as a leading hub for STEM skills training, which will help provide the pipeline of skills businesses need to increase growth and productivity in the local economy (STEM stands for science, technology, engineering and maths).

Brownlie summed up: "Fareham Innovation Centre and CEMAST are both part of a vision to create a world-class hub for advanced manufacturing, marine, aviation and aerospace within the Solent Enterprise Zone. Great things are happening." 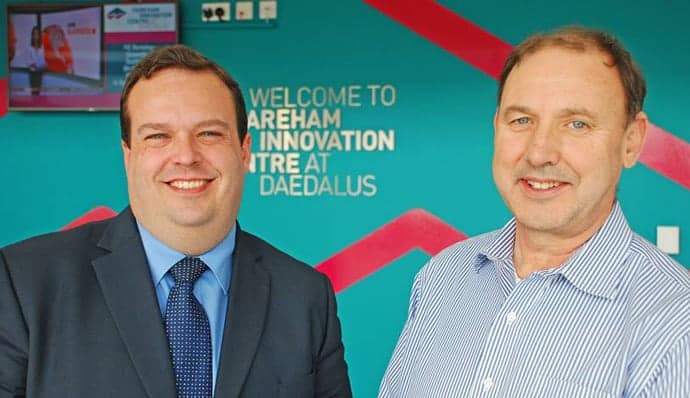 WELCOME: Recently-launched Fareham Innovation Centre, which provides occupiers with advice and support to help them start and grow their businesses and is run by Oxford Innovation on behalf of freeholder Fareham Borough Council, is now 100% occupied. Pictured from left are Stephen Brownlie, Oxford Innovation's regional manager for the South, and one of the centre's latest occupiers, Peter Eales of MRO Insyte. Occupiers at the award-winning £5.3m centre, next to the former Daedalus military airport at Lee-on-the-Solent, are from the marine, aviation, aerospace and engineering sectors. 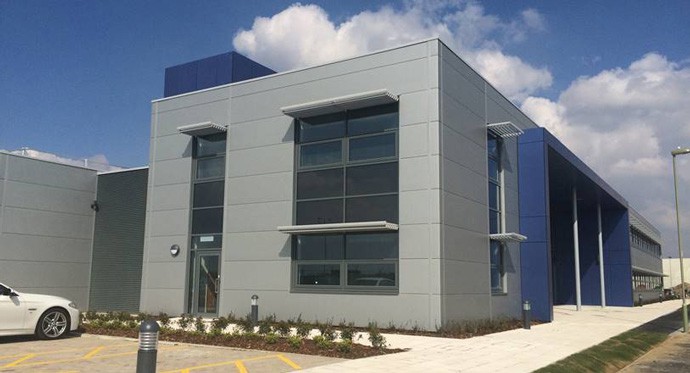