Construction work has completed on the first phase of a multi-million-pound hangar development that aims to double the capacity of Solent Airport and create a major new business hub.

Five new hangars, three of which are under offer, are now ready for occupation at the airport, which is located within the Solent Enterprise Zone on the former Daedalus airfield, near Fareham. The five hangars, each 6,350 sq ft in size, are available for general aviation purposes.

A further six hangars, each 6,450 sq ft in size, are expected to be completed early next year and will be available for businesses in the aviation, aerospace and marine sectors.

Sean Woodward, leader of Fareham Borough Council, said: “These are the first speculatively built hangars at the site and we are pleased to see the scheme coming to fruition and already attracting significant interest.

“The completion of the first phase of this development is another key step to Solent Airport becoming the premier location for aviation, aerospace engineering and advanced manufacturing businesses in the south.”

Fareham Borough Council, which owns the site, has speculatively built the development and South Coast commercial property specialist Lambert Smith Hampton (LSH) has been appointed as the sole sale and letting agent for the site.

LSH has seen a high level of interest in the development, with three of the initial hangars already under offer from existing tenants at the site.

The airport currently has around 30,000 flights per year with a plan to plan to grow this over the medium term.

Guy Jackson, associate director for Industrial at LSH, said: “The completion of the first phase of this development brings five large high-quality and affordable units to the market. It offers aviation businesses and clubs prime space to store their aircraft.

“It’s another significant step in the growth of the Solent Enterprise Zone and the fact that three are already under offer is an indicator of the huge appeal of the site.

“We expect to see a similar level of interest in the business hangars once they are completed in early 2018.”

The new hangars are part of a £50 million masterplan to transform the site into a business airport. The council anticipates the airport expansion could eventually create 3,500 jobs over the next decade.

The club hangar development has 39 shared parking spaces, while each business hangar will have six dedicated parking spaces. Both sites meet the criteria for substantial business rates relief if moving into the site before March 31, 2018. 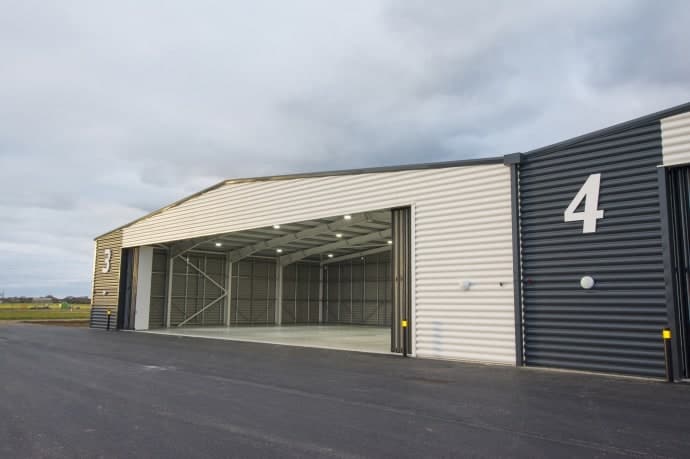