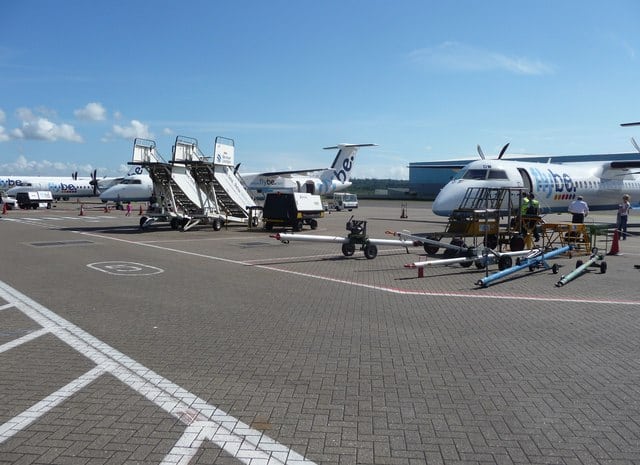 Prime Minister Boris Johnson visited Southampton Airport on Wednesday where he outlined his support for the campaign to extend the runway by 164 meters.

With a High Court decision on the legality of granting planning permission for the extension imminent, Southampton Airport has it seems won the backing of one very high profile supporter.

The Prime Minister stated that the decision to grant a runway extension despite objections, was: "vital for jobs and growth."

The PM was accompanied to the Airport by local MP, Paul Holmes.

Although the PM did not speak to local media, he did issue a statement in which he stated his: "strong support the plans for the improvements of the airport by 2023, the extension will enable fewer yet larger planes to arrive. Bringing in more people on fewer flights. So from an environmental perspective, it's totally defensible.

"But from a business perspective from a jobs and growth perspective, I think it's the right thing for this part of the world.

"We need more connectivity between our regions, it's absolutely vital.

"The levelling-up agenda means that people need to be able to move fast from one regional hub to another, not just to the centre."

What exactly are the issues? The Business Magazine examines…

The plan
To extend the Southampton Airport runway 164m to the north, install additional car parking provision all within the existing perimeter of the airport.

What was debated in court?
Council’s decision, taken in June 2021, to grant planning permission for the extension was objected to by a resident’s group.

The Group Opposed to the Expansion of Southampton Airport (GOESA) state planning permission should not have been granted as the application was to be subject to an inquiry. Lawyers acting on behalf of GOESA described the Councils procedures as “fundamentally flawed.”

David Wolfe QC said objectors had a “legitimate expectation” that no vote would be taken until the government decided if a public inquiry should be held into the airport expansion.
As yet no such inquiry has been established.

John Lauwerys, of GOESA – Group opposed to expansion of Southampton Airport – said: "We believe we have a very strong case, the decision was flawed both in the way it was taken and the reasons for doing so."

Why does the airport require an extension
The extension will make the airport suitable for a wider range of air travel providers. Airport revenues were detrimentally affected when one of their biggest carriers FlyBe ceased operating as a result of the pandemic.

According to a spokesperson for Southampton Airport: “The extension is absolutely critical to our viability as a regional airport.

“Approval of our runway extension unlocks a £15m investment into the airport. We estimate that the runway extension will generate an additional 2.8% of economic growth in the Solent LEP area by 2027.”

What is behind the opposition?
Under debate in the High Court were matters that included the age and relevance of planning policies, council procedures used in planning approval, greenhouse gas emissions and climate change.