The Dolphin Shopping Centre in Poole has announced planning permission has been granted by the Borough of Poole to convert existing space into a nine-screen cinema.

The former Argos store and adjoining units will be redeveloped into a new-build, nine-screen cinema complex, complete with four adjacent casual dining restaurants. Construction work is expected to start later this year.

Empire Cinemas has signed a 25-year lease to operate what will be the first multiplex in the town centre, with one of the nine screens being open-air on the rooftop, giving a memorable experience for residents and holidaymakers.

The cinema development is the latest announcement as part of the Dolphin’s £26 million programme of investment with Legal & General. Legal & General bought the centre in 2013 and is carrying out an 18-month improvement programme, with other changes including mall refreshes, public realm updates and new retailers.

John Grinnell, centre manager at the Dolphin Shopping Centre, commented: “We’re delighted to announce that planning permission has been granted for this exciting multiplex cinema. This latest investment will further shift the shopping centre towards a truly family-orientated offer and will help bring an element of trade that will extend into the evenings, creating a strong daytime and evening attraction for the south coast town.

“The cinema, at the heart of the shopping centre, will help generate more vibrancy and appeal for the town centre as a whole and will provide significant additional amenity for visitors to the Dolphin.”

Justin Ribbons, chief executive officer of Empire Cinemas, commented: “We are delighted that planning permission has been granted. Empire Cinemas is thrilled to be returning to Poole as part of this fantastic new leisure facility at the Dolphin. With nine Screens including Empire Cinemas large format, IMPACT® Screen, D-Box and our open-air, rooftop screen there really will be ‘Something For Everyone’.”

The Dolphin covers 530,000 square footage with more than 100 retail, restaurant and leisure brands and has an annual footfall of 11 million. The latest retailers to join the line-up include H&M, Deichmann, Smiggle and JD. 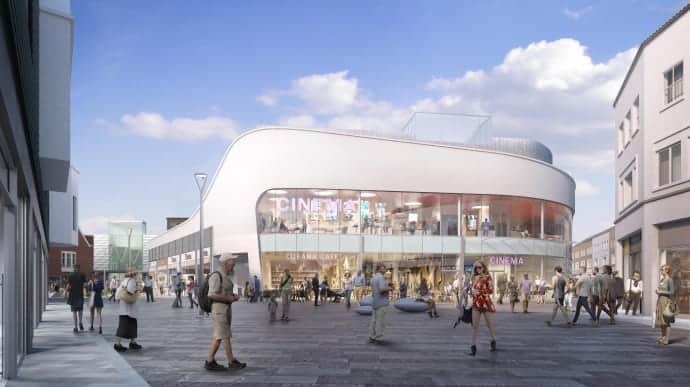