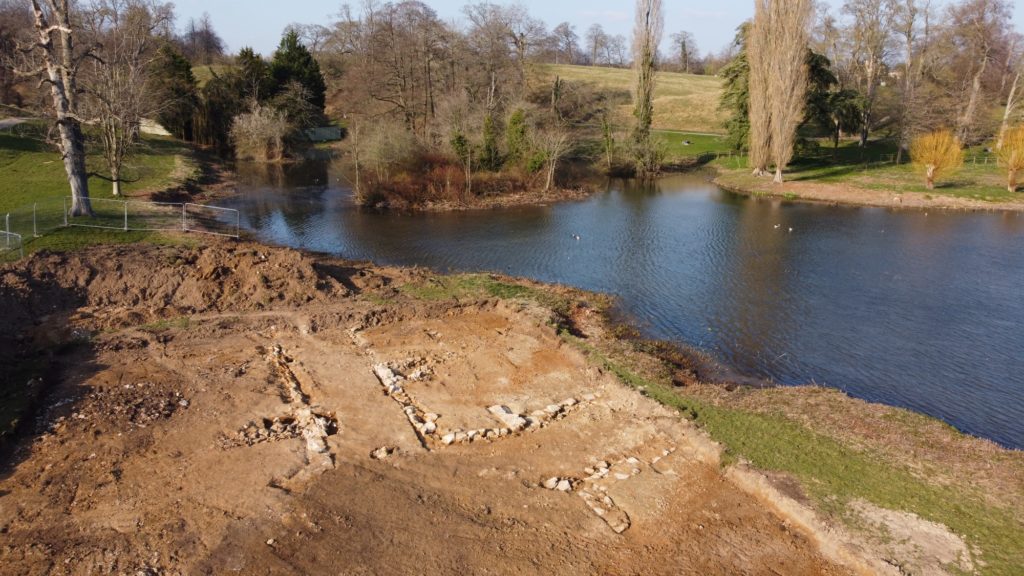 Archaeologists have discovered what they believe to be the remains of a 14th century watermill complex at Blenheim.

The stone structures were uncovered as part of preliminary work ahead of a major dredging project of the Oxfordshire UNESCO World Heritage Site’s iconic Queen Pool.

Wessex Archaeology has been surveying and excavating the site prior to dredge work commencing to ensure no historical remains are affected by it.

It’s believed the watermill is associated with Woodstock Palace, a royal hunting lodge that played host to no fewer than 16 British monarchs over its 700-year history with everyone from Ethelred the Unready to Henry VIII having spent time there.

Demolished in 1720 to make way for Blenheim Palace, it was also the birthplace of the Black Prince and used as a temporary prison for Queen Elizabeth I, who is said to have carved ‘Much suspected by me, nothing proved can be, Quoth Elizabeth prisoner’ on a window sill.

“As part of the Queen Pool Restoration Project, we have been involved in the initial archaeological work within the World Heritage Site at Blenheim Palace,” said Andrew Manning Wessex Archaeology’s Regional Manager South and West.

“The project involves removing significant quantities of silt from the lake and depositing the material within part of the North Park to create a new landform to the north of the lake.

“Accordingly, all aspects of the project will be carefully monitored and assessed by archaeologists to ensure any revealed remains are recorded and protected.

“The most significant discovery is stone water channels, which would have been part of a medieval mill site, recorded as being demolished in 1334, and which was partly excavated in the mid-1970s.

“The remains found this year comprise part of the stone-lined mill race, directing water from the mill and are surprisingly well-preserved and substantial.

“Drone surveys clearly show the stone races extending into the current lake and with evidence of further structures visible below the lakes surface,” he added.

According to historical records a small pond – known as Queen Pond or Pool had existed on the present site since the Middle Ages, alongside a second fishpond, known as King’s Pool.

Both these water bodies were associated with the Woodstock Palace. In 1976 archaeological excavations of a ‘Medieval water mill site’ linked the original Queen’s Pond to the ‘site of a mill pond’ created by damming tributaries of the River Glyme.

Queen Pond may originally have been created as a retained body of water used to drive the mill wheel.

The pond is said to have been named after Queen Philippa, consort of King Edward II, whose son, Edward, the Black Prince, was born at Woodstock in 1330.

The name was retained by ‘Capability’ Brown for one of the lakes created when he flooded the valley to make his great waterworks.

Once fully recorded, the remains will be carefully recovered and logged for future reference.

The dredge, which gets under way this month, is one of the largest civil engineering projects ever undertaken at the Oxfordshire UNESCO World Heritage Site.

Wet civil engineering contractor, Land & Water will remove 300,000 cubic metres of silt, enough to fill Wembley Stadium, and return the ‘Capability’ Brown-designed lake to its original depth of two metres from its current shallows of 30cm.