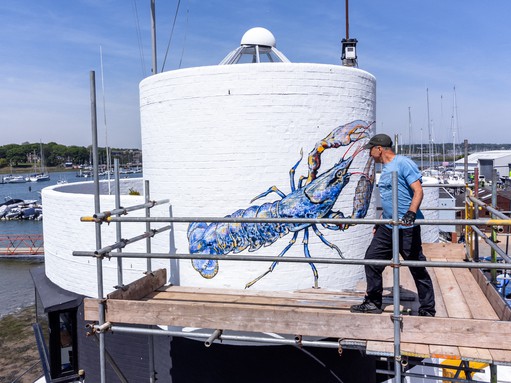 A series of six artworks depicting the wildlife of the Solent region has now been completed.

The works were commissioned by Hampshire and Isle of Wight Wildlife Trust. Despite being one of the busiest shipping lanes in the UK, the local waters teem with wildlife.

The 'Our Secrets of the Solent' collection was commissioned to highlight and celebrate the wildlife of the local waters.

The fantastic series of murals was completed by renown wildlife street artist, ATM. The oeurve of the London based artist usually focuses on endangered birds.

This work includes among others a Lobster which sits proudly on the wall of the River Hamble Harbour Master’s Office in Warsash and a seal close to Lord Louis Library.

The Hampshire and Isle of Wight Wildlife Trust stated the works include: "The artist’s first mural of a spider crab at Hythe Pier near Southampton which was completed in June 2021.

"It was followed by a gigantic, ten metre long thresher shark at the Langstone Harbour Office on Hayling Island, plus a short-snouted seahorse located on the Ocean Car Park in Southampton.