One of Theale’s most prominent and well-loved buildings is enjoying a new lease of life after being bought by an international firm as its new headquarters.

The Grade II listed Old Brewery building on the town’s high street has sat unoccupied for nearly three years but is now in new hands after being purchased by LE International, which specialises in the distribution of industrial lubricants across the globe.

Claire Tull from Studio 12 Designs was approached by LE International who saw the potential in the building and who wanted to transform it into its international headquarters. The 2,000 sq ft building was once part-owned by Sir Tom Jones, and also, as its name suggests, spent many decades as Blatch’s brewery. A 14-week refurbishment overseen by Tull in partnership with Frasers Office Interiors has transformed the drab Georgian building into a luxurious head office for the company.

Jackie Clark, general manager at LE International, found Claire through recommendation and invited her to come and see the empty building. Together, they worked on creating a plan to restore the building’s character and accentuate its Georgian architectural features while making it a modern hub for a busy, international company.

Clark said: “We wanted to give the building back its beauty while still remembering that it is an office and not a residential property.  Claire listened to what we wanted to achieve and then provided us with ideas on lighting, furnishings and colour schemes which incorporated our company colours.”

Tull added: “It was a little unloved after all this time, but we could see that it had the potential to be a fantastic head office thanks to its location and room for the team of six, with more space for new staff when required. The building wasn’t in bad condition all things considered and retained its stunning entrance hall and staircase, but it needed to be brought up to the standards required by an international company. The finish and decor were very basic, not in keeping with the Georgian heritage and not up to the standards required in terms of lighting and data cabling provision.”

Tull began by working on the colour scheme to reflect the company’s ethos and branding, plus listing all the work that needed to be carried out. The first job was to install the CAT6e cabling as arranged by Frasers and strip out the kitchen and toilets. The Painting Partnership team replaced the lighting, upgraded electrics and plumbing installed the new kitchen and toilets and thoroughly redecorated inside and out. Fine Design Flooring replaced all of the carpets to the offices and public areas and walnut Karndean to the toilet accommodation. After gaining Listed Building Consent the front and back doors could be painted a different colour, the ugly shutters removed and the secondary glazing replaced.

Tull added: “While we wanted to retain the Georgian heritage, it was also important that it was modern, not a museum piece so we combined contemporary with traditional. You’ll see that while the magnolia walls are out, the original coving, plasterwork and woodwork are very much in. Key also to the look was to replace the dreadful strip lighting with energy efficient LED down lights that can be dimmed. More traditional light fittings sourced from Elstead Lighting and Vaughan Lighting were used for the public areas and the chief executive’s office.

"The sash windows also needed to be refurbished as many had been painted shut, now they can be opened to allow natural ventilation which is very important. The original secondary glazing was flimsy and totally impractical. Working with Selectaglaze, and the Windsor Box Window Company, the windows are now the stand-out feature of the bright façade."

Once the building was ready, Claire Tull worked closely with Nick Clark, director at Frasers Office Innovation who provide a one-stop shop for business needs. His company’s role was to provide the Verco furniture and to assist staff with the move.

He said: “I like to visit to get a real understanding of each company’s bespoke requirements and it was immediately apparent that moving to this magnificent building was not your ordinary office move. There was no budget mentioned and the choice of the interiors needed to be of a quality to match the building.

“We arranged for the networking of the telecommunications first and organised a relocation of the existing business at a time to suit the client. We ordered the office furniture from Verco with a six-week lead time.”

Finally, the finishing touch was a Thai Sapphire blue front door with polished brassware which has been attracting comments since it was painted.

Clark was delighted with the results and the move into the new office has fitted smoothly around work commitments.  She added: “Claire has achieved a stunningly beautiful office, she has highlighted the original features of the building and the building now has a calm, relaxing feel about it making it a pleasure to work in.” 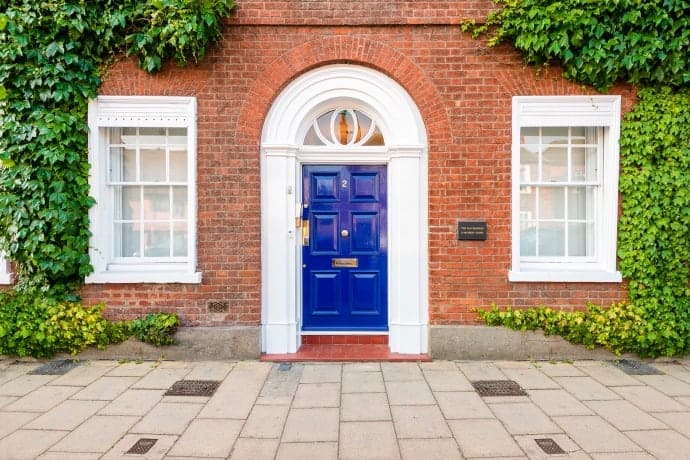