The Royal Air Force Aerobatic Team the Red Arrows will be looping, rolling, and putting the famous red, white and blue coloured trails on as they take to the skies of the UK’s greatest air event later this year. The RAF line-up will also feature the great Typhoon and much loved Battle of Britain Memorial Flight (BBMF). 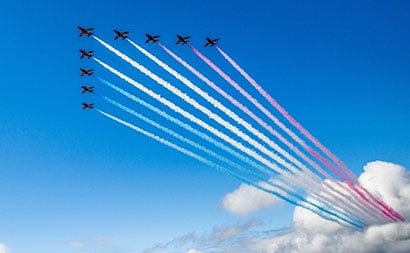 Coming back with gusto, the Red Arrows will display on Thursday, Friday, Saturday and  Sunday, 2 - 5 September. Typhoon and the BBMF also performing across all four days – this is the first time all three RAF display teams have been part of the festival line-up since 2016.

Squadron leader Tom Bould, who is the new Red 1 and a team leader for 2021, said: “Bournemouth is certainly one of our favourite UK venues, like so many display teams, we missed the thrill of home airshows last year.

“We’re all certainly looking forward to entertaining the hundreds of thousands of spectators on the beach; it’s going to be really special to be back where we belong, performing and inspiring the next generation of pilots and engineers.”

As always spectators will be amazed by the team’s pinpoint precision as they demonstrate their breath-taking, synchronised formation and astonishing aerobatics – which will include a number of new manoeuvres for the 2021 display season. The Typhoon, with its new dedicated call sign of ANARCHY1, also makes a welcome return as does the Battle of Britain Memorial Flight – which this year features the full, historical line-up Lancaster, Hurricane and Spitfire.

"Flight lieutenant James Sainty, 2021 Typhoon display pilot said: “The team had a great time at the Bournemouth Air Festival in 2019 and can’t wait to be back again later this year"

Jon Weaver, Air Festival director added: “It’s fantastic to have confirmation of not only the incredible Red Arrows but also the Typhoon and BBMF. We all missed the air festival last year and great news like this does give us real positivity that we will be in a great position by the end of the summer.  As always we’ll keep our preparations rolling forward while staying attuned to any further developments and government announcements.”

Councillor Mohan Iyengar, portfolio holder for tourism, leisure and culture said: “Since the start of 2021, we’ve been determined to make this the year of ‘bounce back’. To engineer the fastest possible recovery for businesses and for jobs – and to help people back outdoors. We’re staying positive – our Festival Coast Live is now well under way with preparations – we just need the weather. And this latest news from our partners in the Air Festival is a massive boost for everyone involved.”

The annual Bournemouth Air Festival on land, in the air and at sea, with fantastic day to night entertainment, takes places from 2 until 5 September 2021.