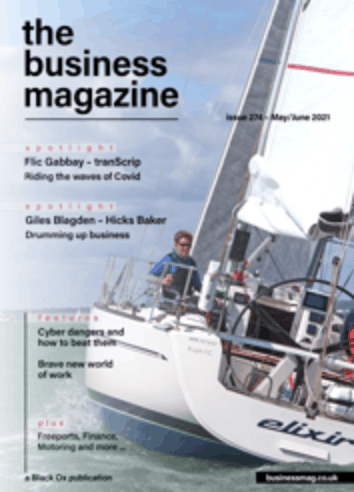 There’s no time to lose for Southampton-based law firm Paris Smith, the port of Solent Gateway and logistics provider DP World Southampton as they prepare for the trade boost the region will gain from freeport status.

“Southampton is well-placed to seize the opportunities that being a freeport offers,” said Peter Taylor, managing partner at Paris Smith and chairman of Southampton Chamber of Commerce’s leadership team, which supported the successful bid to gain freeport status for the Solent region.

Solent is one of eight new freeports in England announced by chancellor Rishi Sunak in his March Budget. Solent Local Enterprise Partnership (LEP), which led the successful freeport bid, estimates that the benefits to the region will be in the order of more than 50,000 new jobs and £2 billion in extra investment.

Paris Smith acts as company secretary for the Solent LEP and the firm is currently advising the LEP on the governance structure for the freeport. “Our work on the freeport goes to the heart of our purpose as a firm, which is to enable our clients and our communities to thrive,” said Taylor. “We expect Solent LEP will be ready to send the final freeport proposal to the Government for sign off in the autumn.”

The firm also has close relationships with many of the city’s major stakeholders in the freeport venture, including the city council, Associated British Ports and DP World.

One of the newer elements in the freeport plan is Solent Gateway, an 83-hectare (225-acre) port site that is being developed and extended as an import/export trade hub. “Solent Gateway is a hidden jewel, especially for short-haul shipping to and from mainland Europe. It will play a key role in the UK’s post-Brexit trade solution,” Taylor predicted.

Heading up Solent Gateway’s transformation of Marchwood Port is port director Richard Parkinson, who was the commanding officer responsible for logistic and equipment support to UK Forces in Iraq in 2006 and later the director of Army Logistics.

Parkinson sees Solent Gateway’s contribution to the freeport as timely as it will provide early delivery of extra port capacity. “This is likely to be one of the leading elements in regenerating the area, creating jobs and providing extra port capacity to attract new business,” he said.

He added: “Solent freeport is an exciting prospect, in addition to the important role Southampton will play as a post-Brexit trade hub. It’s a fantastic location, close to major sea lanes for Europe and the rest of the world.”

Solent Gateway has been designated as both a freeport tax site and customs site. It is investing in HMRC-compliant inventory-linked systems software to be a certified temporary storage site by 1 July, and then a certified customs site in line with HRMC timings. “We will have the latest software systems and efficient processes, so our customers have a smoother transition moving goods into and out of the UK,” said Parkinson.

Solent Gateway will regenerate 64 hectares of the former Marchwood Military Port for commercial use. Marchwood was built in 1943 to support D-Day preparations and has only been used by the Ministry of Defence (MOD) until December 2016. In addition to the commercial space, Solent Gateway will continue to provide the MOD with military cargo services and enhance the ecological value of areas of the port as part of its plan to deliver a biodiversity net gain of 10% on and off site.

“We are currently going through the planning process and hope to start work in early 2022. Phase one of the build includes a new port entrance and exit to ensure no traffic queues on the road, new cycle lanes into the port and walkways to encourage staff to use sustainable transport and the first 20 hectares, which will be increasingly available for commercial use from summer 2022,” said Parkinson. “The rest of the port development will be completed by 2026/27.”

Solent Gateway has two eight-metre-deep berths, an additional two 4.5-metre-deep jetties and rail connectivity to the main line for freight movements. It has roll-on roll-off, as well as load-on load-off capabilities, which are used for commercial business now.

“The port is ideal for medium-sized vessels on shorter sea routes to and from mainland Europe, as well as cargo vessels from around the world,” he explained.

Parkinson expects Solent Gateway and the ports of Southampton and Portsmouth, which will comprise the freeport, to provide healthy competition that benefits customers but emphasised that each of the three has distinct specialisations, so they also complement each other. “Solent Gateway can provide the extra capacity to take certain types of trade that might otherwise not come here, so the Solent region will develop as an even more competitive transport hub,” he said.

Commercial activity at Solent Gateway has been steadily building up over the past two years. Parkinson and his team are currently negotiating with a number of businesses, including some involved in the sustainable energy industry, to locate new facilities in the port.

“As a customs site, businesses will be able to store goods as long as they want and it will be well-suited for light industrial manufacturing and assembly. There are tax benefits from being a freeport tax site plus financial incentives for new business start-ups,” he said. “It’s the perfect site to import, manufacture, assemble and then export, or import into the UK. You can manufacture, store and go. Now is the perfect time for anyone interested in setting up a new operation in a freeport tax site or customs site, as we can include your requirements in our port development plans.”

Based on the predicted amount of storage space, warehousing and facilities that will be developed by new businesses, Solent Gateway expects around 1,100 new jobs will be created by businesses locating there, in addition to the company’s 100-strong workforce. “Solent Gateway is investing around £60 million and, once the port is fully functional, we expect that additional private sector investment will take this to at least £300 million,” he said.

Like Solent Gateway, logistics provider DP World Southampton is putting serious investment behind the freeport development. It has already committed £40m to take its operations at the Port of Southampton to the next level as an international freight and logistics hub.

Ernst Schulze, chief executive of DP World in the UK, said: “DP World Southampton is the most productive port in Britain, turns container trucks around faster than any of its competitors and at 30% also has the highest proportion of its containers moved by rail.”

He added: “Our aim is to partner in our customers’ business success and we are already seeing a surge of interest from companies which want to take advantage of the customs zone and tax benefits resulting from Southampton becoming a freeport.”

For more information on the Solent Gateway development visit the website: solentgatewayconsultation.com

Positive response from businesses signing up for BIS Expo 2021

To be confirmed
-
More info
30
Nov