A Dorset team of social entrepreneurs have launched an ambitious start-up which is turning plastic waste into building materials, and empowering communities in developing countries to do the same. 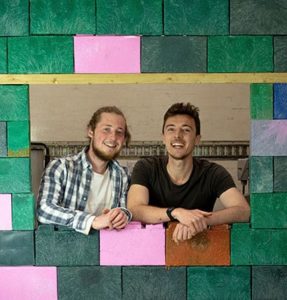 Greenbrick Workshops was founded by Ben Gibbons, and soon joined by co-founder Connor Winter, after the Covid-19 pandemic forced them to return to the UK from Nepal, where they had been working with rural communities to reduce the damage caused by plastic pollution. After catching the last flight back from Nepal before the borders closed in March 2020, they began setting up a plastic recycling workshop that would enable them to develop their product.

The workshop itself is entirely contained within an old Hovis van, which the duo turned into the UK’s first plastic brick workshop. Here, waste plastic is washed and shredded, heated up to 250 degrees, and pushed into a steel mould. It might seem a technical process for someone who studied English at the University of Oxford, but Gibbons stressed that it was not done alone. 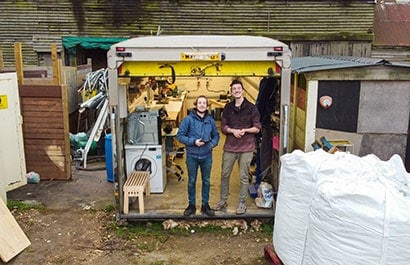 “We’re lucky to have had a design engineer, Ella Fenwick, join the team to lead prototype development; and as a team, what makes us strong is our connection to a wider community,” he said. “What we’re doing was made possible by an open-source network called Precious Plastic, which has enabled us to use an open-source mould for our first prototype. We’re simply refining it to enable it to scale more effectively.”

Their ethos reflects their roots in community-based collaboration. “The solutions are already out there; our task is to make sure that everyone has access to them,” Gibbons explained.

The team are working with NGOs in Zimbabwe and Mozambique to set up local workshops that can use their technology to build affordable houses, and their overall organisational ambition is clear: 1,000 workshops in 10 years, which would prevent around six million tonnes of carbon dioxide otherwise released from plastic burning and the production of clay bricks and cement. This would also recycle around 800,000 tonnes of plastic otherwise headed for the ocean, or around 1% of global ocean plastic leakage.

The Greenbrick start-up was made possible because of the YTKO Group’s Outset Finance programme, which provided a £11,500 loan. “Initially, I tried to apply for grants directly, but it’s very difficult to get funding for an idea,” Gibbons said. “We needed to get the equipment that would allow us to make an early prototype. That’s when I met the team at Outset Finance.”

Outset Finance, an official delivery partner of the government’s Start-Up Loan Scheme, provides new businesses with a sustainable solution to the challenges of affordable finance – especially for start-ups and young businesses with no track record and a lack of financial collateral. After making contact with his local adviser, several meetings were held to talk through Gibbons’ forecasts and other aspects of the business.

“The whole process took just three weeks from start to finish, which was incredible,” Gibbons revealed. “The adviser helped me to improve my application, suggesting that I look at my competitors to consider how to position our community interest company. This help was invaluable and certainly helped to make the application go through so quickly. I’m really thankful for the support I have received from Outset Finance. They had the open mind to take time to understand what we are planning to achieve, and their loan has been crucial to what we’ve been able to achieve so far.”

Greenbrick is one of over 22,000 businesses to have been supported by YTKO over a 14-year period. Analysis of 36 funded programmes across the South West, South East, London, East of England and Midlands, published in March 2021, showed YTKO assisted 22,508 growth-ambitious businesses and 30,752 entrepreneurs (including 47% who were previously out of work, 44% in receipt of benefits and 27% with entry-level qualifications). It also revealed that 51% of those supported by YTKO were female entrepreneurs and 20% Black, Asian and Minority Ethnicity (BAME), compared to national averages of an estimated 23% and 5% respectively. Overall, YTKO’s performance delivered a ‘conservative’ net impact of £282 million GVA, a £362m triple bottom line impact and a ROI of £10.70 for every £1 invested.

“We are incredibly proud of achieving such high levels of both improved productivity and job creation, increasing the competitiveness of the UK economy during the longest period of economic uncertainty in the UK,” said YTKO Group CEO Bev Hurley CBE. “It also robustly demonstrates that financial and social exclusion can be overcome, and therefore how we are impacting directly on the levelling up agenda and left-behind places, pioneering a more inclusive economy. I am so proud that, as an SME ourselves, our teams have delivered such a major impact through our social mission.”