‘The future of technology’ at the Southern Tech 100 Awards

Yesterday evening, entrepreneurs and businesses from the technology world gathered together at Oakley Hall, Basingstoke, for the annual Southern Tech 100 Awards.

During the three-course dinner, two eminent speakers presented their views on the future of technology.  Claire Vyvyan, senior vice-president, UK & Ireland, Dell EMC, described how Dell was now much more than just a PC manufacturer, being an all-round software and solutions provider.

Scott Dodds, CEO, Ultima Business Solutions, outlined his company's focus upon IT-managed services, and in particular, the advent of RPA 'Cloud-based Robotic Process Automation', which has the potential to transform the way in which business works.

A full write-up will appear in the April edition of The Business Magazine. 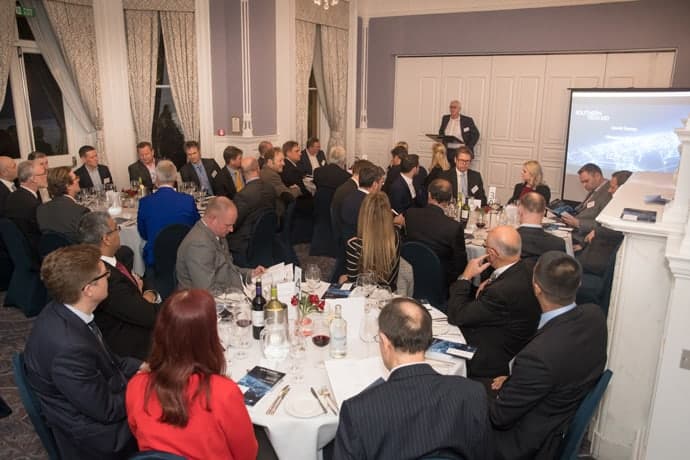 David Murray, managing director and publisher of The Business Magazine addresses the audience at the Southern Tech 100 dinner

“This firm managed to almost double its turnover to £15 million turnover in 2016, having developed a culture of continuously challenging the norm. It was able to demonstrate numerous examples of innovation, both externally for its clients, and internally for its own processes.”

“All the finalists were very impressive, but the one which stood out for us for its innovation has been involved in diversifying into a wide range of different fields beyond its core business. For example, it has recently launched a new carbon fibre commuting bike which could go on to become the alternative to the Brompton bike.”

Business Leader of the Year, sponsored by Moore Stephens.

Winner: ByBox. The winner, Stuart Miller, was not able to attend in person, so Miles Hewitt-Boorman, partner, Moore Stephens, presented and accepted the award on his behalf, with the following words:

“It was very difficult to come to a decision in this category; they were all fascinating business leaders. However, the winner has managed to build a team which is capable of running the business, allowing him to spend more time on development and growth. He has created

a culture of curiosity, and actively engages and recruits people who want to be ‘disruptive’ in order to deliver best value to their customers. However, it’s not just about business –he also contributes to the wider economy by chairing a local business group, and being entrepreneur in residence at local business school. He truly is a worthy winner.”

Ones to Watch, sponsored by Hiscox.

“We were hugely impressed by the growth, ambition, and expertise of all three companies, but decided to give it to a brand which has deep roots in transparency, and in trying to help the world make better decisions. We are confident that this company will enjoy great success, and expect it to be one of the highest risers on this year’s Southern Tech List.”

“Although this is still a relatively small business, it regularly works with global companies to help resolve their problems with incompatible legacy IT systems, and so punches far above its weight in solving complex issues”.

Software Developer of the Year, sponsored by Hiscox.

“Any one of these finalists would have been a worthy winner, but the company which stood out for us continues to innovate and uses their core technology in new and interesting ways. It has managed to grow by self-funded acquisitions, without detracting from its core business focus.”

“This software company has demonstrated impressive growth and through its innovation continues to disrupt the Retail FX industry. Its success has already been recognised nationally, by National Entrepreneurial awards, and as a winner of the Queen’s Award for Enterprise.”