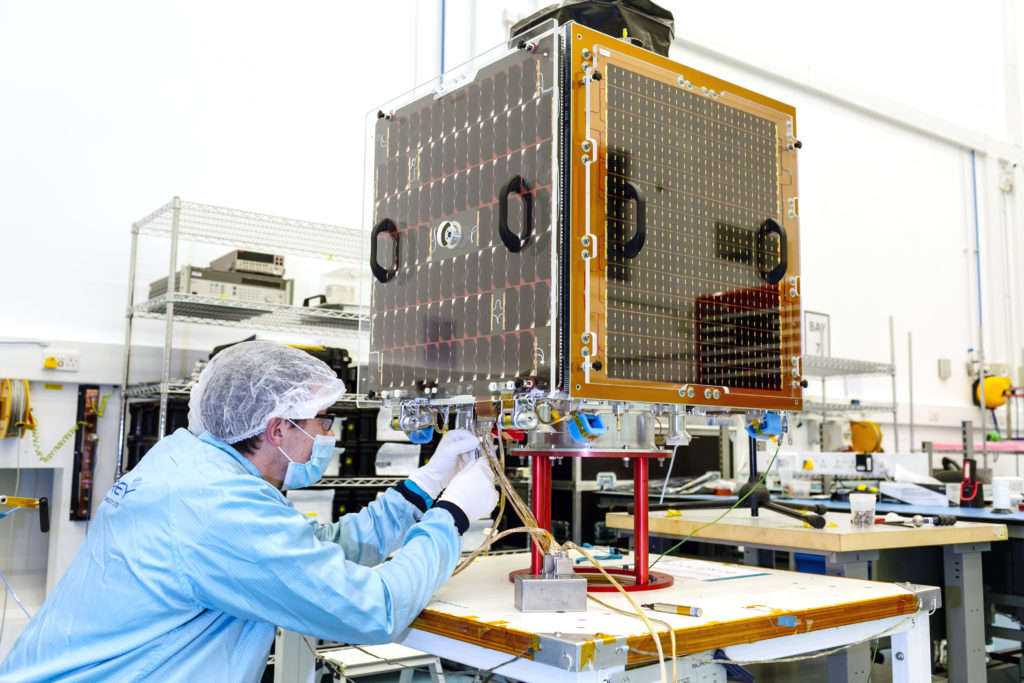 The THEOS-2 SmallSat is a 100kg one metre resolution class Earth Observation Satellite, capable of taking both still and video imagery. It includes an ADS-B payload and a Thai customer developed experimental payload.

Thai Ambassador to the UK, His Excellency Mr. Pisanu Suvanajata, visiting the factory, said “I am honoured to be invited to witness the progress on THEOS-2 SmallSAT project before it is shipped to Thailand, and to learn more about the work that has been carried out by GISTDA to build the satellite in collaboration with SSTL here in the UK.

“This ongoing collaboration represents an advanced and strategic partnership between the two countries which will deliver significant benefits for socio and economic development, such as its applications in urban planning, change detection, infrastructure monitoring and humanitarian disaster monitoring for Thailand.”

The ADS-B payload is tailored for the THEOS-2 SmallSAT and is based on the newly developed SSTL Software Defined Radio which is configurable in orbit, and which has been designed to complement SSTL’s range of small satellite sensors.

Automatic Dependent Surveillance Broadcast (ADS-B) is a technology which broadcasts an aircraft’s flight information periodically, which is then received by ground stations and forward to air traffic control. According to the European Space Agency, plans are underway to fit ADS-B systems to satellites to cover areas of the globe unreachable by ground stations, such as the middle of the ocean and the poles

SSTL’s training programme for GISTDA was devised to enable the Thai engineers to design, manufacture, integrate and test similar satellites in Thailand in the future and was built under a knowledge transfer training programme involving a total of 48 customer engineers from GISTDA, with the training and mentoring taking place both in the UK at SSTL’s Guildford facility, and in Thailand.

SSTL has also been working with GISTDA to develop and qualify their in-country space supply chain, a key element to advance in-country capacity building and achieve sustainable development of space activities in Thailand.

Read more - Surrey satellite to be launched by SpaceX

Phil Brownnett, SSTL’s Managing Director, said “We are delighted to work with our customer GISTDA to extend the latest small satellite technologies to a new generation of engineers, cementing a successful relationship between SSTL and GISTDA.

“SSTL’s training programmes are testimony to the international co-operation at the heart of the space sector, and we look forward to continuing to support our GISTDA colleagues with launch and in-orbit operational support.”

The THEOS-2 SmallSAT is based on SSTL’s CARBONITE series of earth observation spacecraft and will be operated by GISTDA from Thailand with support for early operations from SSTL. The programme was delivered in partnership with Airbus Defence and Space, SSTL’s owners, who are delivering a high-resolution satellite and a comprehensive geo-intelligence system.